Aaroh dominated the Senior National Championship, with his worst finish of the season being a second place. 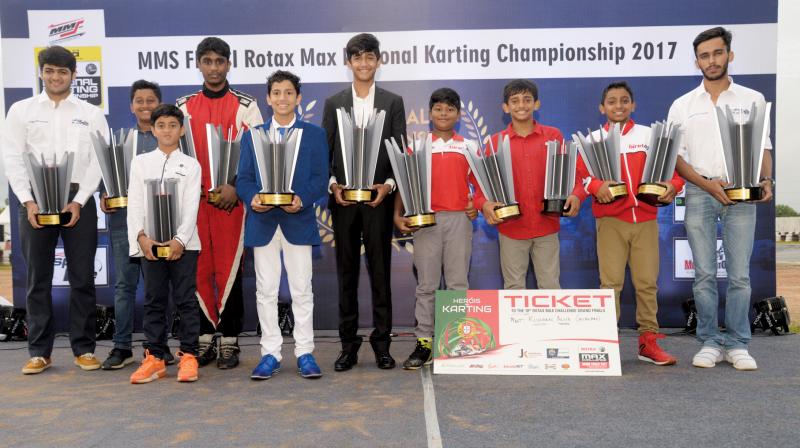 Aaroh Ravindra won the tournament with a lead of 33 points.

Mumbai’s Aaroh Ravindra clinched his maiden National Karting Championship, with a second place finish in Round 5 of the Meco FMSCI National Rotax Karting Championship in Bengaluru this weekend. Ravindra was in a league of his own in the Senior Max category. The Rayo Racing driver amassed a total 436 points after five rounds to emerge as a comfortable winner. He also posted the most number of wins during the season.

Bengaluru’s Yash Aradhya and Arjun Rajiv turned out to be the other stars, taking the Junior Max and Micro Max titles.

Yash (MSport) won the Junior Max title by being in top form all through the season. He claimed 432 points to pip Chirag Ghorpade (PBC Racing; 423 points) to the  post. Young Shahan Ali Mohsin (Sport; 405) took the third place on the podium.

Bengaluru boys sealed the Micro Max podium as Ruhaan Alva of Birel Art won the finals ahead of Rohaan Madhesh of Peregrine Racing and Rishon MR from Birel Art.

Aaroh dominated the Senior National Championship, with his worst finish of the season being a second place. He won the National Title with a lead of 33 points.

“It was an amazing start to the year, with a hat-trick of victories. A double runner-up finish in the last two rounds was not bad either,” said Aaroh after the win.

Aaroh, Yash and Ruhaan will represent India, in the World Rotax Finals in Portugal from November 5-11, as the champions from over 50 countries will vie for the title of World Rotax Champion 2017. Over 300 competitors will race at this World Finals.