Bulgarian fans made Nazi salutes and directed monkey noises at England players who are black during a Euro 2020 qualifier on Monday. 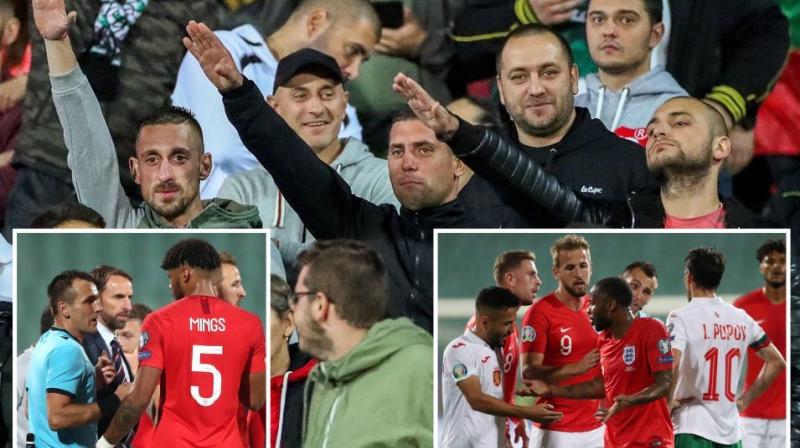 UEFA is expected to wait for reports from the match delegate and referee before charging the Bulgarian soccer federation. (Photo: Twitter)

Nyon: UEFA rules on racism are expected to force Bulgaria to play its next home European Championship qualifying game in an empty stadium.

Bulgarian fans made Nazi salutes and directed monkey noises at England players who are black during a Euro 2020 qualifier on Monday. UEFA is expected to wait for reports from the match delegate and referee before charging the Bulgarian soccer federation.

UEFA said Tuesday it is awaiting notification of a formal case from its disciplinary committee.

Bulgaria hosted England in a partially closed stadium in Sofia as punishment for "racist behaviour" by fans during a previous home qualifier against Kosovo in June.

"A second offence is punished with one match played behind closed doors and a fine of 50,000 euros ($55,100)," the UEFA disciplinary regulations state. Bulgaria hosts the Czech Republic at the same Vasil Levski National Stadium on Nov. 17.

Bulgaria is last in Group A and cannot advance to Euro 2020.

However, the Bulgarian soccer federation could be in line for a stronger punishment if UEFA's disciplinary panel decides Monday's incident was a third offence in Euro 2020 qualifying.

A 3,000-seat section of the stadium was already due to be closed for the Czech Republic's visit next month because of another racist incident in June when Bulgaria played in Prague.

UEFA's escalating scale of punishment states "any subsequent offence is punished with more than one match behind closed doors, a stadium closure, the forfeiting of a match, the deduction of points and/or disqualification from the competition."

A further closed-door game could apply when Bulgaria plays in the Nations League next September.