Elliot did all he could to resurrect the innings but 184 was not stiff enough a target in a final in such fine conditions. 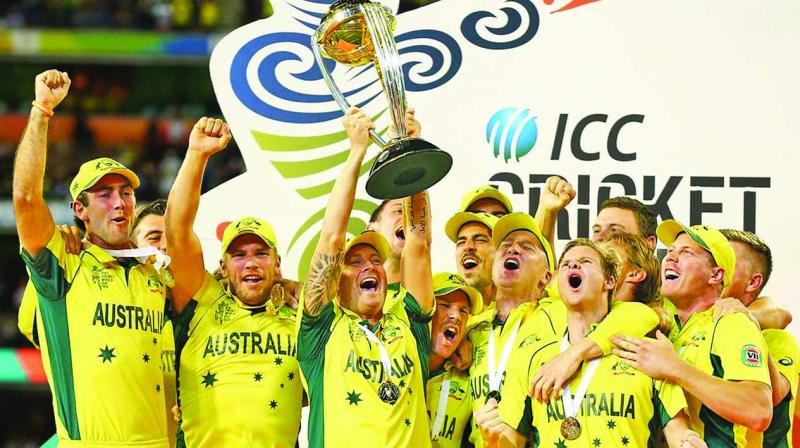 It was the perfect farewell for Michael Clarke, another Australian great not quite in the Sachin Tendulkar class but there or thereabouts. It was also the prefect World Cup, at least from the batsmen’s point of view as runs were freely scored in an era seven years into cricket of the T20 variety in which sending the ball soaring out of the cricket ground with the modern bat is an instant’s work and two double centuries marked the event. In such a setting, a bowler was to be man of the World Cup and another man of the match in the final. Such are the natural checks and balances that go into the making of a great game.

Mitchell Starc yorked Brendon McCullum with the third swinging ball in the final and some of those who made up the record attendance of 93,103 who were at MCG that March day might have felt like walking off. The audacious and imaginative New Zealanders, the eternal bridesmaids of the game, were in their first nervous final and they were throwing away the opportunity against seven-time finalists Australia who were about to lay their hands on their fifth World Cup. The Kiwis had botched their lines against the principal hosts in a perfect competition.

The Aussies were awesome once again, winning 11 games on the trot while those who came nearest to downing them were the Indians who had beaten everyone in sight until running into Australia in the semi-final. They had done everything right in the quarter-final too against the ferociously eager Bangladeshis who saw a conspiracy to dispossess them as they were battling it out with India and a waist-high full toss to Rohit Sharma was adjudged too high when he was caught in the deep.

The Bangladeshi angst remained until the presentation ceremony when their ICC chairman was taken off the dais and Mr N Srinivasan, ICC Chairman, gave away the trophy to Michael Clarke. His swashbuckling 74 had been sufficient to ease the chase against the Kiwis in the Trans-Tasman Derby and he retired from all cricket at the apogee of his career. Kumar Sangakkara, whose wristy, left-handed elegance had held sway in a competition in which he had reeled off four centuries in a row, also quit cricket after his island team were knocked out in the quarter-final by South Africa.

Swinging fortunes had marked an exciting semi-final at Eden Park in which the Proteas piled on the runs until rain distracted AB de Villiers at his best. Even so, with a blitz from Miller, they made 281-5 from 43 overs and a revised target made it tougher for New Zealand who came through off the penultimate ball which their South African import Graham Elliot hit for six. There was an emotionally wrenching moment when Elliot offered his hand to lift up the heartbroken Dale Steyn who lay supine on the ground at the end of the thriller.

The final was not so much a damp squib as a theatre for the bowlers to assert themselves in what was a free-scoring World Cup tat rained sixes like never before. New Zealand’s prospects were dependent largely on what McCullum could achieve to set up the innings. He was barely sighting the ball as he swished once and charged once at Mitchell Starc before being yorked by the third ball of the match in a tournament in which left arm seamers made the difference.

Elliot did all he could to resurrect the innings but 184 was not stiff enough a target in a final in such fine conditions. Clarke’s unhurried elegance in a farewell innings and his heir apparent Steve Smith’s 74 plus the winning hit brought another memorable World Cup held down under in a colourful atmosphere created by genuine cricket fans. The fireworks and the congratulations followed. The performance of the minnows was, however, to lead to the decision that the 2019 event would have no place for the Associates or non-Test playing nations. The elite 10 will play the World Cup from this week.