Iqbal Abdulla does it for ARCS

The senior all-rounder scored half a century to ensure his team qualifies for the T20 Mumbai League semi-finals. 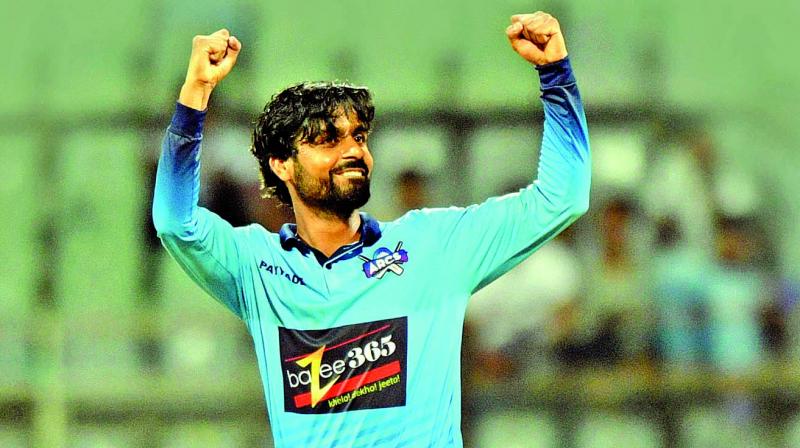 Man of the match, Iqbal Abdulla celebrating a wicket at the T20 Mumbai League 2019.

Senior left arm spinner Iqbal Abdulla sizzled with the bat to guide ARCS Andheri to the semi-final for the first time in the T20 Mumbai League. The southpaw, who has been impressive with the ball through out the tournament, scored a half century and took two wickets to set-up a 12-run win for his team over Eagle Thane Strikers.

ARCS Andheri also became the first team to qualify for the semi-finals in the eight-team league, with four wins in five games. Last year, led by Abdulla, the Andheri franchise had failed to enter playoffs in the six-team league.

But this year saw a change in leadership, with another allrounder Kevin Almedia leading the side. Things have worked pretty well for the side so far as they finished their league engagements by standing at the top of Group B with eight points.

Promoted to No 3 spot after losing Akhil Herwadkar without scoring, Abdulla scored 54 in 43 balls and was involved in a second wicket partnership of 112 runs with Almeida, which is the second highest partnership of the T20 Mumbai League 2019. Almeida top scored with 59 runs as the Andheri side posted 154/8 on the board despite the late flurry of wickets.

Thane Strikers lost regular wickets and fell well short despite the half century from Alpesh Ramjani and 48 runs by Aditya Tare. Thane Strikers lost three wickets (two run outs and one lbw) in the 19th over bowled by Almeida, which also conceded 16 runs.

Opener Eknath Kerkar (70 off 51b, 9x4) anchored the chase to near-perfection for the NaMo Bandra Blasters, to supersede scintillating SoBo SuperSonics by four wickets. Kerkar’s sound knock and twin partnerships of 64 runs with captain Shreyas Iyer (31) for the second wicket and 46 with Prasad Pawar (31) for the fourth, were enough for the Blasters to overhaul the target of 152 runs in the last over despite a late stutter.

Right-arm pacer Nikhil Date (3/27) and left-arm spinner Aditya Dhumal (2/28) first restricted SuperSonics to a below-par total of 151 for eight. Date struck the decisive blow, forcing a nick off SuperSonics captain Jay Bista (27) to keeper Kerkar in the seventh over, he and Dhumal ended the innings on a decisive note for their team. The duo conceded just 27 runs and scalped four wickets in the last four overs they shared to ensure Yogesh Takawale (32) and Japjeet Randhawa’s (27) rebuilding act fell short of a formidable total.