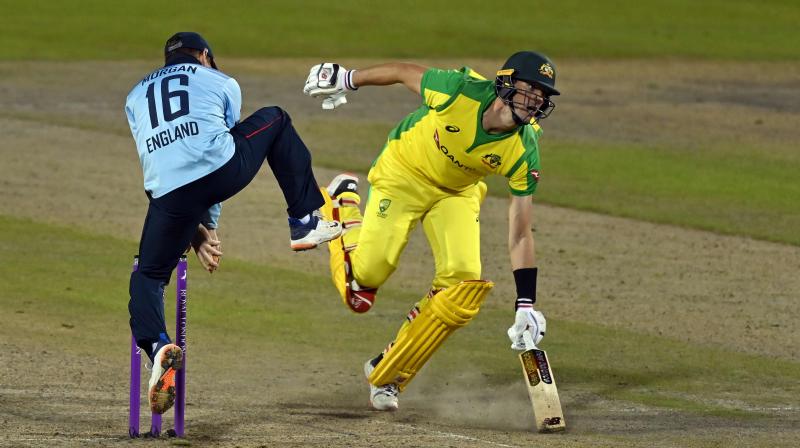 England and Australia players in action during the third ODI. (AFP)

Dubai: The 21 Australian and English players, who are members of different IPL franchises, arrived here on Thursday from the United Kingdom ahead of the opening match of the world's richest T20 tournament on Saturday.

The players, including the likes of Steve Smith, David Warner, Jofra Archer and Jos Buttler, landed here late evening (UAE time) in a chartered flight from the UK after featuring in a white ball series which ended on Wednesday.

Warner and some other players were seen wearing Personal Protection Kits (PPEs) in view of the COVID-19 pandemic which has forced the BCCI to shift the league out of India this year.

All of them will undergo RT-PCR test for COVID-19 in Dubai and the three Kolkata Knight Riders players -- Eoin Morgan, Tom Banton and Pat Cummins -- will then proceed for Abu Dhabi, where their team is based.

Only KKR and and defending champions Mumbai Indians are based in Abu Dhabi while the remaining six franchises are in Dubai.

All the Australian and English players who arrived in the UAE will undergo just 36 hours of quarantine instead of the earlier prescribed six days after the BCCI under Sourav Ganguly's leadership has been able to successfully sort out the issue with local authorities in the UAE.