The seemingly unconquerable Indians will be taking on a recently overhauled South African side. 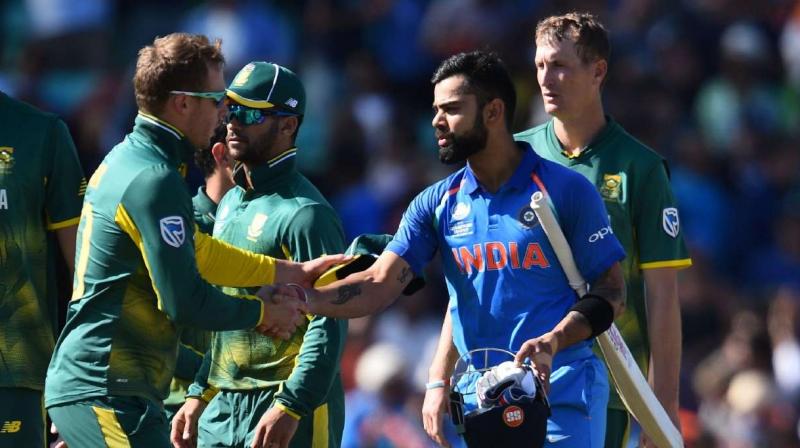 India will face South Africa on Sundat at Dharamsala in the first match of the three-match T20I series. (Photo: AFP)

Mumbai: The seemingly unconquerable Indians will be taking on the South Africans, who have had a squad overhaul for the India tour and will look at a rejuvenated performance against them. India is considered to be an all-out favourite to win the entire T20 series, despite the Africans standing above them at number three in current standings. This is, because, the current South African squad bears very less resemblance to the squad that helped achieve this ranking.

One mind-boggling record worth noting is that the 14-member South African squad selected for the India tour has a combined experience of 210 T20Is. This experience of theirs is still nine matches less than that of India’s top three alone. The experimental squad is a direct result of their disastrous World Cup 2019 campaign.

The talented Quinton de Kock has been entrusted the captaincy of this inexperienced side. His deputy, Rassie van der Dussen, will be looking to emulate his form from the World Cup in this series. The experienced David Miller will be counting on his involvement in the Indian Premier League to strike gold for his team.

India, too, have problems of their own. Shikhar Dhawan, who hasn’t been in the pinkest of forms recently, has to perform throughout the series to cement his place in the squad. If he doesn’t, then KL Rahul will always be ready to pounce when the time is right. The hotly debated number three role will also be in contention. Shreyas Iyer has been given this spot in ODIs and will also aim to make this spot his own in T20Is. Although Manish Pandey will give a tough fight for this spot, he has to prove his worth after his flop-show in the West Indies tour.

Rishabh Pant, too, will be allowed to take a breather as Hardik Pandya will return to the squad after a break, thus providing a cushion for Pant.

So far, the selectors have kept the cricket fans on their toes by including surprising names in India’s squad for the upcoming home series against South Africa. Since the West Indies tour, the selectors haven’t selected the pair of Kuldeep Yadav and Yuzvendra Chahal.

The selector’s decision are quite baffling, considering the fact that 2020 T20 World Cup is just one year after. The spin duo will most probably lead the attack. However, the selectors are busy trying out new faces like Washington Sundar, Rahul Chahar, Deepak Chahar and Krunal Pandya.

In the bowling department, Ravindra Jadeja and Krunal Pandya would both act as bowling all-rounders. Washington Sundar’s recent emergence and excellence in powerplay overs could make him a starter in Virat Kohli’s side. Another major headache would be to choose between Navdeep Saini, Khaleel Ahmed and Deepak Chahar.