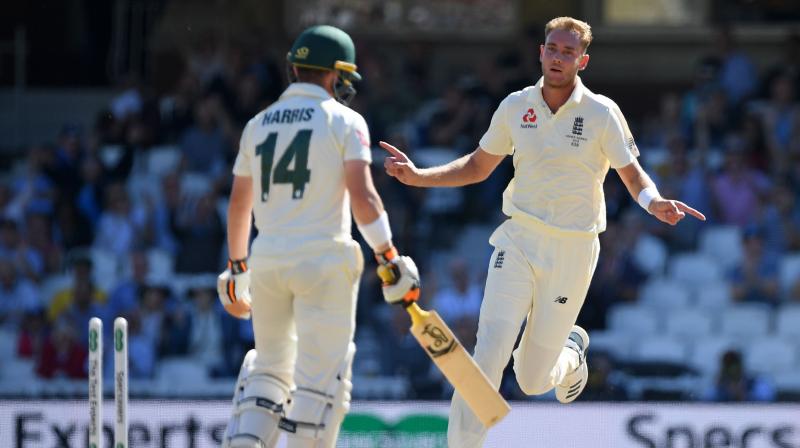 Paceman Stuart Broad pounded in, roared on by a packed crowd, who raised the roof when he demolished Marcus Harris's off-stump in the fifth over, removing the batsman for nine. (Photo: AFP)

London: England closed in on a series-levelling victory in the fifth Test at the Oval on Sunday as Australia slipped to 68-3 at lunch on the fourth day.

Paceman Broad pounded in, roared on by a packed crowd, who raised the roof when he demolished Marcus Harris's off-stump in the fifth over, removing the batsman for nine.

In his following over, Broad ended David Warner's miserable series, with the opener edging him to Rory Burns in the slips and departing for 11.

The attacking batsman has scored just 95 runs in 10 innings and has been dismissed by Broad seven times.

Warner's dismissal brought Steve Smith to the wicket and he opened his account with a sweet drive through the covers for four off Jofra Archer.

Smith and Marcus Labuschagne (14) took the score to 56 before off-spinner Jack Leach beat the outside edge of Labuschagne's bat and Johnny Bairstow whipped off the bails to complete a sharp stumping.

If they manage to win, it would be the first drawn Ashes series since 1972.

The tourists' hopes rest almost entirely on the shoulders of Smith, who has dominated the series with his bat despite missing one-and-a-half Tests after being hit by an Archer bouncer.

His 769 runs so far put him fifth on the list of highest tallies in an Ashes series behind Don Bradman's two entries, England's Wally Hammond and former Australia skipper Mark Taylor.

Australia are seeking their first Test series win in England since 2001 but only once before have they scored 399-plus runs in the fourth innings to win a Test match, against England at Headingley in 1948.

Earlier, England took their second-innings total to 329, with Archer and Leach the last men out.