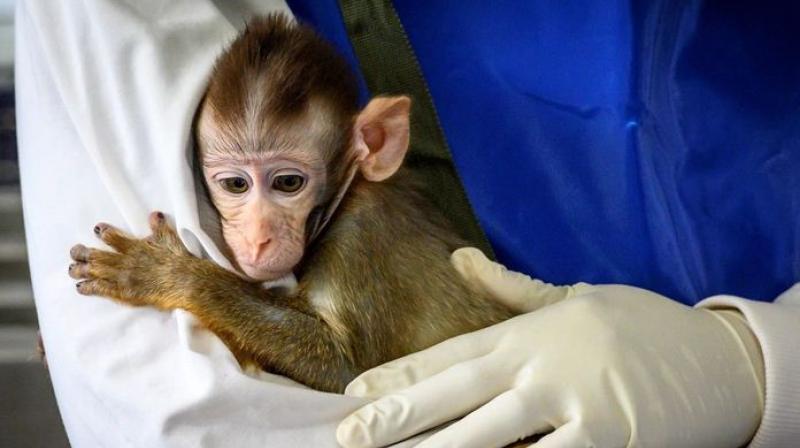 While the rats, mice, rabbits and Syrian hamsters were lab-bred, the rhesus macaques that were used in testing Covaxin candidates were caught in the wild in Maharashtra. (Representational Image/AFP)

Hyderabad: First there were the mice, and some rats. Then came Syrian hamsters and the rabbits. And finally there were the rhesus macaque monkeys. The lakhs of people receiving Covaxin to keep themselves safe from Covid-19, and to help stop the spread of the disease in India and elsewhere in the world, have much to thank these animals for.

Not just because these animals were the first ones to receive the jabs of the three vaccine candidates developed by scientists at the Bharat Biotech, along with Indian Council for Medical Research (ICMR).

Not just because the animals were deliberately injected with the SARS-CoV-2 to test the efficacy of the candidate vaccines while in their cages in a high security Level 4 biosafety hazard lab at the National Institute of Virology (NIV) in Pune.

But because at the end of the study periods, each of them was put to sleep for ever before necropsies were performed on their bodies by the scientists who studied what the virus did to the animals and their organs, and how the vaccine candidates worked in controlling the virus in their bodies.

All these animals, unknown to anyone outside of the NIV lab or the scientists involved in the vaccine development — in human terms — made the ultimate sacrifice of giving up their lives so the very humans who put them through the trials, could keep themselves safe from the virus that probably racked their fragile bodies as the vaccines and the virus battled it out in their organs.

In three studies, scientists from Bharat Biotech, NIV and ICMR provide great detail about how the trial were conducted, and how the immune response for the candidate vaccines — three versions of the then under-development (during the peak of the lockdown in 2020) Bharat Biotech’s vaccine — was in these animals.

There is a reason why lab grown rats, mice, Syrian hamsters, and rabbits are chosen for the studies. As is also the case with the rhesus macaques. The manner in which the immune responses to a virus in these animals develop, is very close to how a human body responds to a virus. And therein lies the value of testing vaccine candidates on these animals even if it means injecting them with the virus to study how their bodies respond and how the vaccines work in controlling the virus in them.

Once the trial is over, even if it is possible to extract tissue samples from various organs without actually killing the animals, their subsequent upkeep and nursing them back to health is a hard task. Since these animals are bred for the express purpose of testing in labs, with the exception of the monkeys, and once the tests are completed they are of no further use for any other tests, they are put to sleep in the most humane way possible, according to a senior scientist well versed with the strict protocols that govern use of animals in labs for such tests.

While the rats, mice, rabbits and Syrian hamsters were lab-bred, the rhesus macaques that were used in testing Covaxin candidates were caught in the wild in Maharashtra.

According to the study on the tests conducted on the monkeys, permission from the Office of Principal Chief Conservator of Forests (PCCF), Maharashtra state, was obtained for capturing 30 rhesus macaques from the wild. Because a decline in the macaque population was observed in the permitted areas of Maharashtra due to the habitat change “probably imposed by food scarcity during the Covid-19 lockdown period of India (March 25, 2020, till May 31, 2020),” 20 of them — 12 males and 8 females — “were captured using experienced monkey catchers,” the study reported. The research was conducted in compliance with the guidelines laid down by the Committee for the Purpose of Control And Supervision of Experiments on Animals, Government of India, the study said.