The joint statement provides the third coordinate to understand the trajectory of bilateral relations. 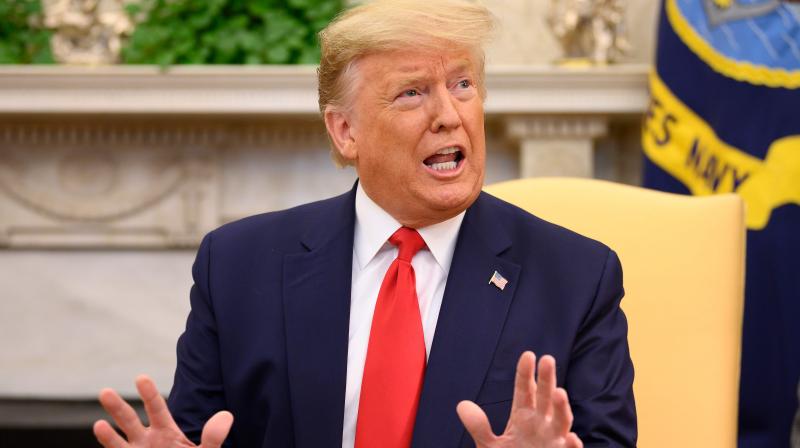 The much-anticipated “standalone” visit to India by US President Donald Trump began with contrived theatre on the streets of Ahmedabad and the Motera Cricket Stadium while the Taj Mahal provided a soothing interlude. But it ended anti-climatically with President Donald Trump evading questions about the mushrooming violence in Delhi over the Citizenship (Amendment) Act, only cryptically remarking it was up to India to handle it the best it can. But on television and in the print media, the images played out side by side.

Do shared values between the largest democracy and the most powerful one, a perennial leitmotif, matter in the new paradigm of engagement between two populist leaders, whose politics are often at variance with the founding principles of their nations? Democratic Congressman Rob Khanna, crafting the “new progressive foreign policy” of Democratic presidential frontrunner Bernie Sanders, said in an interview in National Interest that human rights would top their agenda. The Narendra Modi government has taken a calculated risk in assuming that Mr Trump’s re-election is inevitable.

An assessment of Mr Trump’s visit requires parsing of his carefully-crafted Ahmedabad speech, his comments during the press interaction at the US ambassador’s residence on Tuesday evening and the Indo-US joint statement. In the first, he went from praising Mr Modi and his historic win to lauding India as a democracy and a peaceful and tolerant nation. He also emphasised freedom, liberty and the dignity of Indian citizens. India, he said, not only had the holy Ganga but also the Golden Temple and Jama Masjid. But speaking extempore at Roosevelt House, he adopted a different tone. He refused to delve into the CAA or mushrooming communal violence in parts of Delhi; and recalled Mr Modi’s strong assertion, that he said was made in the presence of a “large group”, that he was for religious freedom. India, President Trump felt, would make the right decision in this regard. This leaves the window open for criticism later, but the Modi government for now got the desired thumbs-up on its divisive domestic politics.

The joint statement provides the third coordinate to understand the trajectory of bilateral relations. Three subheadings club the themes, old and new. The first delineates the “Comprehensive Global Strategic Partnership”, which reaffirms mutual trust, shared interests, goodwill and robust engagement of people. But there is no mention of shared values. It delineates defence and security ties and transfer of “advanced US military technology” to India, now a “major defence partner”. The truth is although the US now allows the sale of its latest weapons systems, transfers of technology are unlikely with private entities, unless India buys platforms being phased out like F-16 fighter jets, rechristened F-21 for India. US weapons have enabled India to selectively fill gaps in defence preparedness while also keeping a transactional US President from raining bricks on India for trade imbalance.

Closer cooperation in countering terror and securing India is a hackneyed theme. But President Trump, answering questions about Pakistan’s terror syndicate, indicated unwillingness to downgrade relations with Pakistan as it is facilitating the US-Taliban deal. Mr Trump’s reading of the ISIS rollback is also flawed. He claims US success when in reality the honours go to Iran and Maj. Gen. Qasem Soleimani, whom the US assassinated in a drone attack. Thus, India cannot fully share President Trump’s perception of counter-terrorism as India needs to keep balanced relations with all sides in the Gulf and West Asia, and a watchful eye on Pakistan. For instance, India has the world’s second largest Shia population, creating a natural convergence with Iran.

The joint statement then brings in “Strategic Convergence in the Indo-Pacific”. Again, it is not a new concept. Since President Barack Obama’s presidency, steps towards this partnership have grown. The inaugural Quad meeting between Australia, India, Japan and the US was held in 2006. After a gap, it was revived by the Modi government and has been elevated to ministerial level. The proposed Blue Dot Network (BDN) is a clever extension across the same footprint of an idea, funded by the private sector, to compete with China’s Belt and Road Initiative by promoting projects in the Indo-Pacific. If pursued vigorously, the coronavirus-hit Chinese economy may impact Chinese BRI projects, opening gaps for BDN. But Mr Trump tends to lead from behind, expecting his partners to do heavy lifting. India is also called a “net provider of security” in the Indian Ocean Region. This needs to be pursued with care so as not to provoke China.

The final headline is about “Global Leadership”. The US endorses reform of the UN Security Council and India’s permanent membership. India joining the Nuclear Suppliers Group is also supported. The imminent US-Taliban deal raises questions as President Trump, in his press conference, claimed that India welcomes it. (Both India and Pakistan have been invited to attend its signing in Doha on February 29.) The existing Abdul Ghani regime in Kabul is in disarray, with Mr Ghani claiming electoral victory, which is disputed by his opponents and even the US. India was also told to maintain development and security assistance, but unlike in 1990s India can’t do that unless Iran provides access. US-Iran ties degrading under America’s maximum pressure and the election of an extremely conservative parliament are omens of instability and chaos. So what was the Indian “happiness” that President Trump claimed?

Trade was the unacknowledged spectre during the visit. President Trump repeatedly and jocularly referred to Mr Modi as a “tough” negotiator. This was self-acknowledgement that both leaders are protectionist, populist nationalists, firm about their core beliefs. Mr Trump believes in balanced trade with each nation. Both want job-creating inbound investment. Mr Trump agreeing to drop temporarily the trade deal indicated he saw benefit from his India visit, nine months before the US presidential election. India gave him spectacle, masses of cheering crowds and a defence deal. A first-stage trade deal has been promised. He would expect some positive rub-off on the voting intentions of the four million-strong Indian diaspora in the US, particularly in critical swing states. Mr Modi personally gained from the encomiums paid by Mr Trump and was able to divert attention from a series of state election setbacks, public resentment over the misguided CAA and the slowing economy. It was clever to have top Indian industrialists brief President Trump publicly about their US investments. Mr Trump’s transactional nature can be distracted or temporarily satisfied, but will eventually reassert itself. But for now, both sides can pat themselves on the back over a half-full diplomatic glass.