“The wall” in India is being mocked as aggressively as the other, more notorious wall in America. 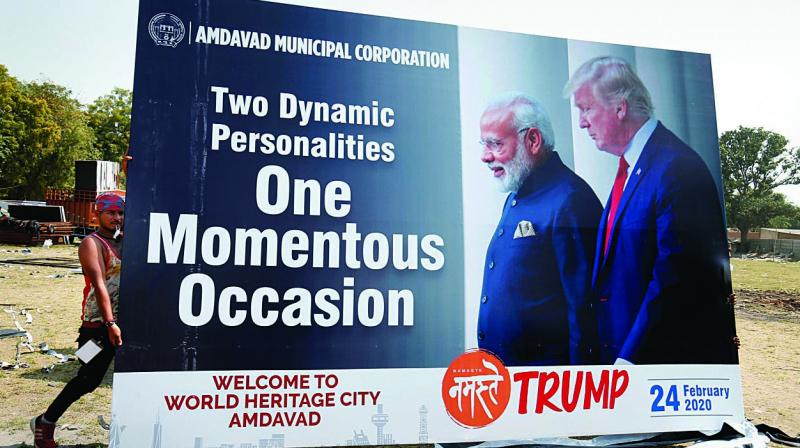 I mean… get over it, guys! Two men who totally get the new communications lingo of bombast and insults will be meeting next week to further their own selfish interests. One will use the India gig to kick off his re-election campaign and the other — well, just to stay relevant. What’s in it for us? Donald Trump and Narendra Modi between them have more numbers on the plate than any other two individuals on the planet. Orange Hair boasts he is number one on FB, while 56-inch Chest stays at number two. The game of schoolboyish one-upmanship continues, as the two big boys representing the world’s most powerful democracies issue love letters to one another long after Valentine’s Day. A few things have changed since the time global leaders could fool people with doctored images and syrupy public relations. “The wall” in India is being mocked as aggressively as the other, more notorious wall in America. Agree, the purpose behind building the two walls is entirely different. We deal with our immigrant issues in far more devious ways — we don’t build walls to keep people out. We are sneakier than that! Our wall in Ahmedabad is to keep POTUS from noticing the squalor behind the chak chak, as he drives to what is being tom-tomed as the “world’s largest stadium”. Making sure everything goes tickety-boo at the massive stadium is a certain Jay Shah, son of India’s No. 2 (odious title — but what to do? Some things just stick!) Amit Shah. Young Jay Shah wants to ensure that the Motera Stadium visit (which will attract zillions of eyeballs) goes off minus a glitch. Never mind, that as someone who heads the BCCI, Jay Shah has kept the important business of cricket on hold, and postponed the interviews for national selectors till after Donaldbhai departs.

Oh yes, in the interests of making the Lotus-Potus visit a little more pan-Indian and a little less Gujju-centric, the official “Kem Cho” greeting has been replaced by a more acceptable “Namaste”. Though, personally speaking, I rather like “Kem Cho”. it has a cheery, informal ring to it, and is much catchier than the staid “Namaste”. Besides, given how well “Howdy, Modi” resonated across the media, “Kem Cho” could also have become a part of international jargon, even if some might have goofed up thinking it is the Korean Khimchi spelt wrong. Like Mr Trump and most of America, Mr Modi and our beloved Gujaratis project a robust, no-nonsense practicality. No wonder the two leaders get along. In fact, so “shaana” is Mr Trump, if you read between the lines of his recent India statements, he has taken care to differentiate his personal equation with Mr Modi with his official policy. “I happen to like Modi a lot,” he said. Ohhkkkk. But hey, what did he mean by petulantly adding that the US has not been treated well by India? Huh? Calling his host country “tariff king” is hardly the most complimentary note to kick off the visit. And just in case anybody was expecting a big trade deal on this trip, The Donald has made it clear it ain’t happening! He has merely dangled a carrot, while concentrating on the optics. He has been promised seven million people between the airport and the stadium. In reality, there could be a piddly 10,000, who’ve been “persuaded” to line up obediently and cheer the visitor. If only one could’ve hired a clever Bollywood/Hollywood special effects team to fix the visuals virtually in a sophisticated hi-tech studio! The natives would have been spared the glare!

In between all this golmal, we are dealing with our own complex issues, struggling to find a way thorugh the thickets. The Shaheen Bagh impasse continues, with no immediate solution in sight. Supreme Court-appointed mediators Sanjay Hegde and Sadhana Ramchandran are up against a great deal of resistance, as they attempt to open up a fair and free dialogue with protesters. As interlocutors, all they can do at this stage is assure the emotional women that constructive dialogue was the only way forward. “We are here to listen,” the protesters were told, even as the emotionally charged ladies frequently broke down while listing out their demands. God knows whether anything worthwhile will come out of this intervention, but at least it’s a start. It goes without saying that the charming Yogi Adityanath’s vicious tirade against any and every protester goes on unabated. The last brilliant quote had him taunt those who didn’t fear bullets by suggesting they harboured a death wish! To paraphrase the great sage, he said, “If someone arrives with the desire to die, how can such a person survive?” He also added that nobody died in police firing. The victims were rioters shot by other rioters. And hello! If people were in possession of illegal firearms — someone had to die, right? Right, sirji. You are absolutely right. As always.

While polite, state-supported, self-declared patriots think nothing of entering libraries, women’s hostels, campuses and creating mayhem, we the bystanders are supposed to put our hands together and clap when President Trump shows up. That too, khaali haath. His re-election is a done deal. But it will still make a fantastic photo-op back home, to see a sea of brown folks greeting the Great White Hope. As for us bewildered citizens waiting for something to fall neatly into place — at this point just about anything will do! Swear! We would love to say “Kem Cho” to both men, because, honestly speaking, we have no clue what the outcome will be!