As the Covid-19 tally continued to climb, a desperate KCR even wished that reporters writing “negative news” be infected with corona 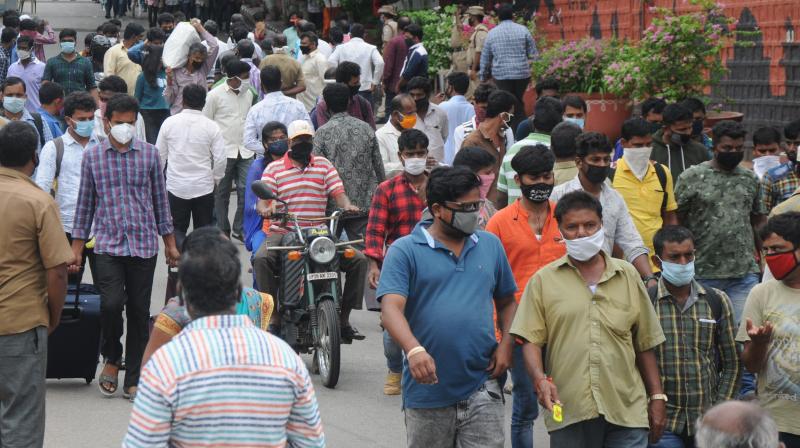 On March 11, 2020, Telangana chief minister and TRS president K. Chandrasekhar Rao dismissed the spectre of coronavirus as “not a big threat” and prescribed Paracetamol as the only medication for Covid-19.

When the world was gripped with the novel coronavirus pandemic infecting millions of people around the world and roiling the stock markets, Mr Rao felt there was no need to “press the panic button”, not as yet.

When a techie contracted the deadly infection, the second case to have been reported in Hyderabad in early March, the chief minister called the techie a “sannasi daridrudu” (useless fellow) for spreading the virus. The techie had a travel history to Italy. And the blame game kicked off.

Desperate times call for desperate measures. In times of national crisis, people look to their politicians for leadership and direction. The health of the people in his state depends on the competence of the chief minister and his team to confront this deadly global threat.

The KCR administration had failed to prepare for the probability that Telangana would face a major global health challenge.

Despite warnings early on, the Telangana government's approach had been way too casual. “Light theesko (light lelo)”, as they say in Telugu land.

The casual approach was reflected in KCR’s personal beliefs and views on corona. After peddling the Paracetamol prescription to Covid-19, Mr Rao stated that the virus cannot survive in temperatures above 22 degrees Celsius, many called these as his personal views and pretty much unscientific.

On March 16, the state administration was jolted out of its stupor after at least 10 Indonesians who attended the Tablighi Jamaat congregation in Delhi's Nizamuddin Markaz tested positive.

The Indonesians roamed freely in Karimnagar for more than a week, while the state administration was caught napping. Two Thai nationals tested positive for Covid-19 in the days following March 16. This gave the ruling dispensation ample ammo to shift the blame on Tablighis for the spread of the virus in the state for nearly two months.

Almost every single case was attributed to the Tablighis. While there could be some truth that the Tablighis showed callousness, a bigger part of the blame lies with the government that did little to combat the pandemic and didn't do enough testing to contain the spread of the virus. The KCR government was put on the back foot for the continuous low testing. For several days, the government did not even release the testing data.

On March 23, KCR declared complete lockdown (Lockdown 1.0) in line with the central government’s policy. Mr Rao, a huge entertainer, even threatened shoot-at-sight against those who failed to comply with lockdown regulations. Between March 23-27, when the state's Covid tally climbed to 59.

KCR’s media briefings had large doses of humour, often lacking scientific base. “Rich protein food will boost immune systems and thereby keep corona at bay,” he had prescribed. This too lacked scientific base.

KCR’s “chicken and egg” theory had a lot to do with giving a boost to the poultry industry severely hit by Covid-19 and not the immune system.

“Have oranges, sweet lime and pomegranates. These are vitamin-packed fruits, good in these days of coronavirus,” Mr Rao advised. One wonders why a chief minister would don the hat of a nutritionist when he already has a lot on his plate.

From Lockdown 1.0, to 4.0, KCR had uttered a striking number of false claims about the coronavirus pandemic. He had claimed that the state medical administration was fully equipped to handle even one lakh Covid-19 patients and that a 1,500 bed new hospital was being built in record time.

Further, KCR had claimed there was adequate stockpile of PPEs, N95 masks, gloves and other medical gear for the frontline warriors even as an increasing number of doctors, nurses, paramedical staff, police personnel and health workers contracted the virus.

The Telangana high court had pulled up the KCR government over acute shortage of PPE, N95 masks and other medical gear. “How could the frontline warriors contract the virus if the government supplied medical equipment to combat the pandemic,” wondered the court.

In a video-conference with Prime Minister Narendra Modi, KCR had claimed that a vaccine for Covid-19 can be expected by either July or August as Shantha Biotech was working towards this.

“We’re very close to a vaccine,” he declared. At a media briefing, the CM stated that Shantha Biotech chairman Varaprasad Reddy met him to inform that the vaccine will be ready by July, a statement vehemently denied by Varaprasad Reddy.

On April 27, Mr Rao claimed Telangana will be a corona-free state even as the state tally crossed the 1,000 mark. He had reassured the public that there was nothing to worry about, that all was under control and that the number of those infected would be brought down to zero.
In the month that followed, things went tremendously out of control.

The chief minister became the blamer-in-chief. He blamed everyone, projecting his failures on anyone but himself or his administration. KCR and his crack team tried to defend the administration’s approach and convince people that the crisis shouldn’t worry them so much.
The daily press briefings were public relation exercises, propaganda sessions to cover up the government’s failures on several fronts. The ruling TRS assigned blame to the Tablighi Jamaat congregation in New Delhi, the Narendra Modi's government for not providing proper facilities and financial aid (oops, helicopter money) and the journalists for their “crooked minds” spreading “fake news” virus.

As the Covid-19 tally continued to climb, a desperate KCR even wished that reporters writing “negative news” be infected with corona. “You should get coronavirus,” he cursed the journalists who were merely doing their jobs risking their own lives.

While gyms remained closed, the TRS government, ruling in a hurry to fill its coffers, had allowed alcohol to flow in the state, queues snaked several liquor stores in the state as tipplers longed to quench their thirst.

Drinking alcohol will weaken the immunity system and can make the coronavirus worse, the WHO had warned. Who cares? Andhra Pradesh too had allowed liquor sales. The wheel of the economy should be running, silly. Liquor money is more important than public health. “No mask, no liquor,” KCR had said.

Total fatalities (as on date) has neared 250. The state government is heading towards Lockdown 5.0 from Unlock 1.0. One cannot predict whether this is closing the gates of the stable after the horses have bolted, but if it's done, a strictly enforced lockdown supplemented by ramped up testing could halt the downhill Covid slide.

What is needed is the political will to take on the challenge and unlock newer strategies to combat Covid-19.