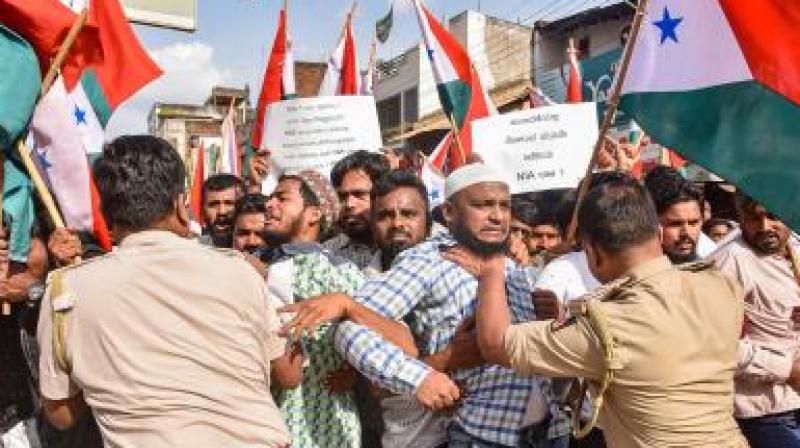 Police attempt to detain Popular Front of India (PFI) and Social Democratic Party of India (SDPI) workers during a protest against the raid of National Investigation Agency (NIA), in Hubballi, (Photo: PTI)

The ban on the Popular Front of India (PFI) and its eight associate organisations under the provisions of the Unlawful Activities (Prevention) Act, 1967, is at best a legal action against an extremist organisation, but the political isolation of its ideology calls for action by all the stake holders of the secular State.

The PFI has fed itself on Indian Muslim’s sense of alienation and insecurity under a dispensation controlled by the Hindutva forces. Both editions of the NDA government at the Centre have given enough signals that it has little belief in what the Indian Constitution calls secularism. It was none other than Prime Minister Narendra Modi who said arsonists can be identified by the dress they wore, referring to the people who protested against the Citizenship (Amendment) Act, 2019. He had no qualms saying Opposition leaders have fled to places where minorities are in the majority, referring to the decision of Congress leader Rahul Gandhi to contest from Wayanad. No wonder any administration he leads is unlikely to inspire much confidence among the Muslims.

But instead of championing their cause in a democratic and legal way, the PFI has taken an extremist position bordering on terrorism. It has displayed its disdain for democracy and its institutions when its workers chopped off the hands of a college teacher alleging that he had made disparaging reference about Prophet Mohammed in a question paper. They were not even taking revenge on the man but were imposing a sentence they had decided as per their own rule book. No nation can allow such an organisation to freely enjoy the fruits of liberal democracy.

The ban of an organisation whose appeal has religious basis is unlikely to work. If it were to be the case, then the RSS, banned thrice, would have perished but that did not happen. All forces who believe in the survival of the secular Indian State should address the root cause of the creation of such organisations with earnestness. There are no easy ways to snuff out communal ideologies.