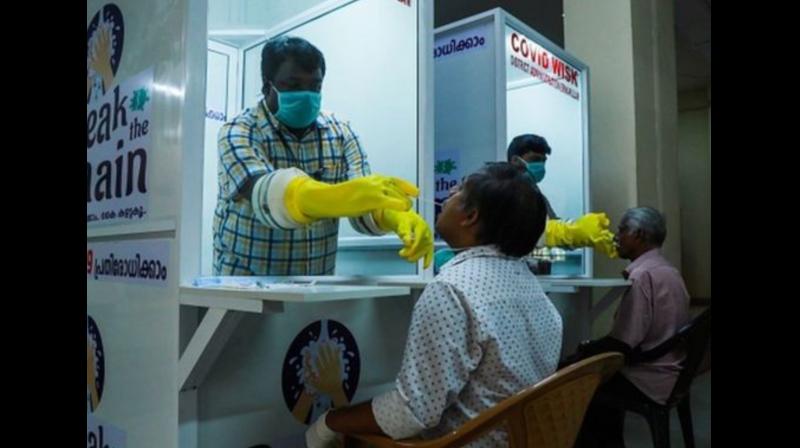 It is universally accepted that local self-government bodies and people’s representatives were at the forefront of the fight against the virus in the first wave but that focus is not seen there now. Representational Image (Twitter)

It’s ironical that Kerala is now contributing almost one half of the total number of new cases of Covid-19 infections nationally, given that the state had performed exceptionally well during the first wave of the pandemic. The state reported 22,129 cases on Wednesday when India reported 43,634 cases; the corresponding figures for Tuesday were 11,586 and 29,689, respectively. While it is widely believed that the state has managed to control the number of deaths, a fresh controversy has been triggered after it was revealed that the state recorded 23,486 deaths although the official account was 15,871. The Opposition walked out of the Assembly on Wednesday saying the government’s Covid containment strategy has failed.

Kerala has one of the best health infrastructure systems in the country and its doctors are renowned for their knowledge and skills world over. The state has managed to inoculate 37 per cent of its population. These factors together may have ensured that deaths have not gone out of control.

Experts are at pains to explain the unprecedented rise in the number of Covid cases, but most point the fact that, during the second wave, Kerala has tried to defeat the virus with a policy no other state has adopted. The government believes in shutting down the economy. Shops are allowed to open only three days a week, resulting in an avoidable rush of people. Neighbouring Tamil Nadu, and most other states, have opened themselves up and still managed to contain the pandemic.

Kerala must review its Covid strategy against its own during the first wave and against the experience of other states. It is universally accepted that local self-government bodies and people’s representatives were at the forefront of the fight against the virus in the first wave but that focus is not seen there now. The government relies more on bureaucratic tools, including the police, though proven strategies come handy, especially in times of uncertainties.