It appears armed American, probably motivated by racism as well, is as dangerous as lone wolves who let their zeal drive them into terrorism 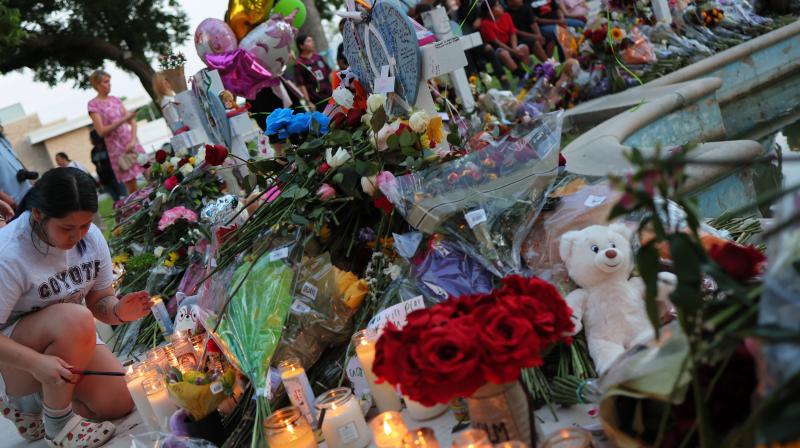 People visit memorials for victims of the May 24th mass shooting on May 27, 2022 in Uvalde, Texas. ( Michael M. Santiago/Getty Images/AFP)

Just days after the horrible Texas school massacre, the National Rifle Association of the US held their annual convention in Houston. To go with their business-as-usual attitude was a resolve not to let the Uvalde school event change things. This is a tragedy without end in the land of the free where there is no sign of a collective will even to bring in common sense bipartisan legislation to usher in checks on people buying guns.

The United States goes through eternal cycles of immediate outrage over a public shooting and, in its wake, a degree of optimism over a legislative deal to do something about such carnage before insurmountable partisan division creeps in and life lapses to its regular patterns. What is so particular about the USA and mass shootings in public places, triggered by macabre illogic that takes innocent lives at random, including, most tragically, those of school children?

The Republicans who, as a rule, oppose any restrictions on gun ownership and will fight to retain the right as mandated by the Second Amendment, see the carnage as a social problem that has little to do with the pursuit of their ideology. Besides wringing their hands in exasperation, the Democrats have always pursued ways to bring in checks and balances that might help reduce the problem of guns reaching the hands of the wrong people.

Debates have run for decades around restricting sales of automatic rifles and the use of armed guards at schools, including in Uvalde where police seemed to have waited too long before intervening. But today’s desperados and delinquents are wearing body vests, as at the scene of the recent department store massacre, before launching into a mad, end-of-life misadventure.

It appears an armed American, probably motivated by racism as well, is as dangerous as lone wolves who let their zeal drive them into terrorism. Most of the rest of the world may heave a sigh of relief that gun violence massacres are not their problem. But it must set us all thinking about whether individuals who may feel no need for civic responsibility towards the basic rules of civilised society should be entitled to own a weapon.