Hitting centre never raises the hackles but, while a swing to the extreme left may surprise, any movement to the far-right delivers a shock 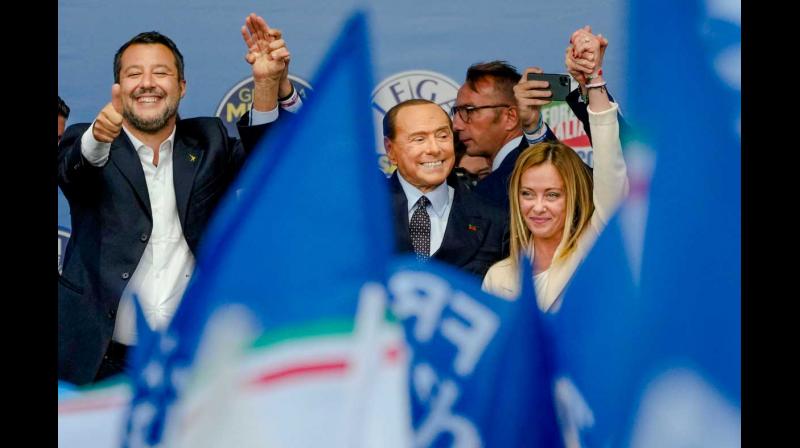 As a wave of anti-establishment sentiment gathered post-Covid, the victory of Giorgia Meloni’s Friends of Italy to lead a coalition that includes the mercurial Matteo Salvini’s League and the stalwart Silvio Berlusconi’s Forza Italia should be raising the pique more than causing the ringing of alarm bells.

Of the three major points in the political spectrum, hitting the centre never raises the hackles but, while a swing to the extreme left may surprise, any movement to the far-right delivers a shock. More so in the case of Italy because an iconoclastic populist in Ms Meloni and her party with roots in the post-war fascist party MSI will be heading a fractious coalition in a nation that has had its fair share of a rise and fall of electoral alliances in the last few years.

Also, the political momentum in Europe in these fraught times of a cost-of-living crisis and runaway inflation is indubitably with the right, as evidenced in the results of the Swedish election last week, which followed Marine Le Pen’s impressive-enough showing against Emmanuel Macron in the French presidential election.

The ground realities of an Italy ensconced firmly in the EU may, however, be the balancing factor as the country needs recovery funds from EU institutions, estimated to be nearly 200 bn euro in the next four years to avert recession. Furthermore, her own party’s survival instincts after coming to power as well as her softening stand on EU and support of NATO after the Ukraine war might see a mellower Meloni holding the reins.

It may seem a paradox that a coalition, with 26 per cent of the vote when only 64 per cent of voters turned out because of general disenchantment with politics, will be ruling at a time of sweeping euro-scepticism baiting Brussels. Italy’s largely decentralised system offers hope too that Meloni might first attempt to set the economy right to help people in distress before trying to force any of her anti-migrant and reactionary ideas on her people.