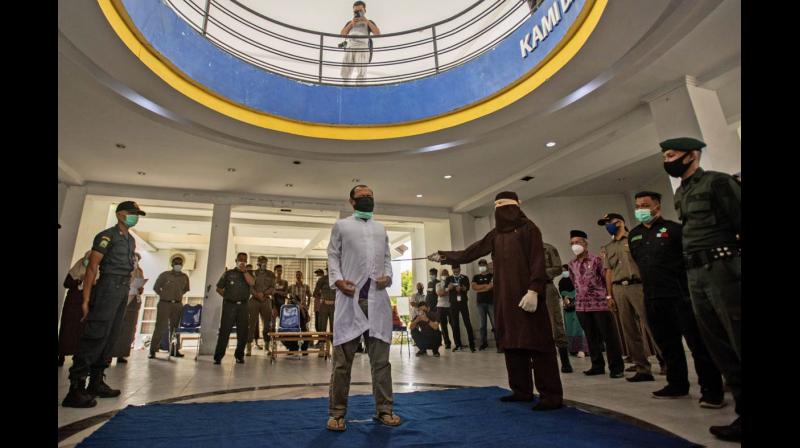 In a file photo, a Shariah Law official uses a rattan cane to whip one of two men convicted of gay sex in Banda Aceh, Aceh province, Indonesia, Thursday, Jan. 28, 2021. Two men in Indonesia's conservative Aceh province were caned 77 times each after neighbors reported them to the Shariah Police for having sex. (Photo: AP)

Indonesia, the world’s most populous Islamic country, appears to be changing tack, potentially tilting towards authoritarianism. In a sweeping revamp of its criminal code — passed unanimously in parliament but to be applicable after three years after the code is rewritten — sex outside marriage has been criminalised, laws against blasphemy have been strengthened and curbs on freedom of expression as well as assembly of people introduced.

A nation that used to pride itself in tolerance and support of democratic traditions in the last 24 years might be slipping as it takes a theocratic turn, possibly under the influence of a vice-president who is a cleric.

The fear is, attempts are being made to overturn the basic tenets of democracy in scrubbing out the difference between public and private affairs.  What happens in the bedroom has stayed beyond the purview of laws in most evolved societies, even if did take time for some of them to accept that the LGBTQ are as human as everyone else and have equal rights. It appears the new code would discriminate against the rainbow people, particularly gay couples.

Laws against blasphemy, common enough in the Islamic world, may not be to fear most in a society that has thus far been open and somewhat tolerant of dissent in demonstrations against the Establishment. But, dissent is also being sought to be throttled now by prohibiting criticism of the president and vice-president and virtually all of the government, thus reversing a tradition of progressive tolerance.

The constitutional court could still strike down parts of the new code, if it finds it too restrictive as it had done in the past. President Joko Widodo may have built up a reputation for liberal views and tolerance of dissent. But the unanimity among lawmakers suggests this shift towards conservative Islam may be here to stay.