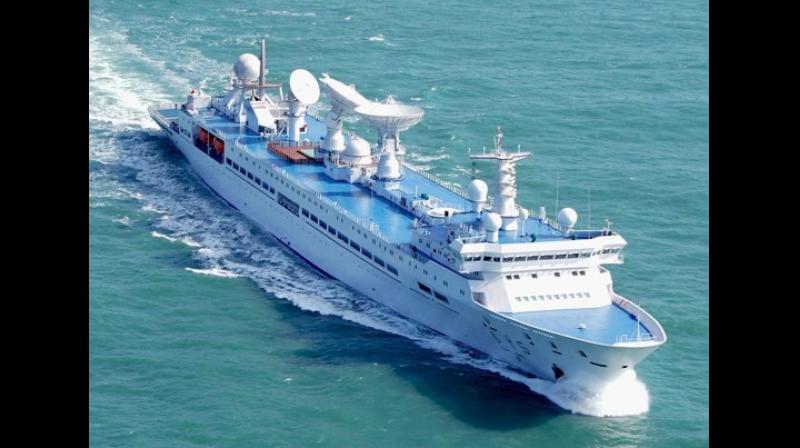 Chinese Spy Ship Yuan Wang 5, which was scheduled to berth in the Hambantota port (Photo: Twitter)

India scored a diplomatic victory in persuading Sri Lanka not to allow the Chinese ship Yuan Wang 5 to berth in the Hambantota port as scheduled this week. Sri Lankan President Ranil Wickremasinghe may have seen the logic behind India’s security concerns when it came to allowing a spy ship with space and satellite tracking capabilities so close to India.

It may have been an easy enough decision for the pro-West, pro-India leader Ranil Wickremasinghe, in sharp contrast to the Rajapaksa brothers whose pro-China policies led Sri Lanka into an economic cul de sac. Even so, he had to take the call personally after government officials were inclined to allow China, which virtually owns the Hambantota port, to allow the ship to refuel and pick up supplies.

In the last eight years, Sri Lanka had not allowed Chinese submarines and naval ships berthing facilities even if the Hambantota port itself was given over to China on a 99-year lease in December 2017. Ranil’s decision is the first sign that the new government in Colombo will be inclined to find a balance in relationships with China, still its biggest lender, and India, which had gone out of the way during the island’s worst economic crisis to lend a helping hand with $3.8 bn worth food, medicines and fuel.

There was adverse public reaction internally too as Colombo toyed with giving the Chinese ship clearance. Considering how grateful the Sri Lankan public must feel about India at this juncture, the President may have had no option but to take this call on asking China for indefinite postponement of the vessel sailing until discussions are held about such a sensitive security matter.

India never did have a problem with keeping lines of communication open with Sri Lanka even during the reign of the Rajapaksas, of whom Mahinda used to be a frequent visitor to India and an open admirer of the New Delhi leadership. Such a policy of keeping talks going may even be proving exasperating for India in the case of China and the LAC, near which India-China held their 16th round of military commander talks last week without sight of any breakthrough but reached a consensus on the road ahead. Even then, talks must go on in the hope of acceptable outcomes.