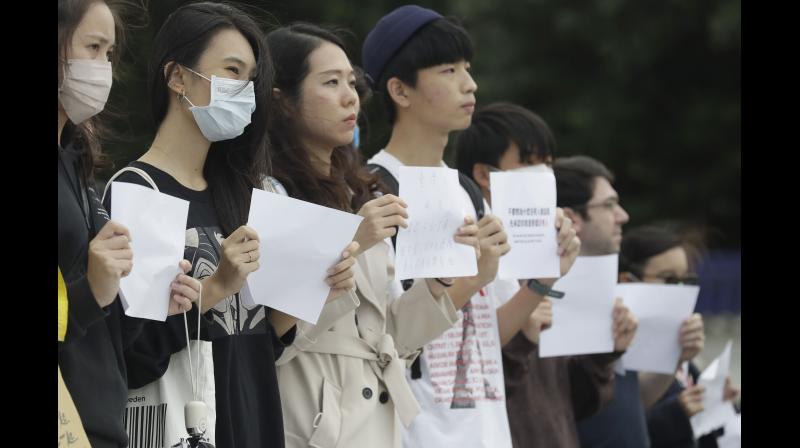 Over 50 protesters held white papers in support of the Chinese people under harsh zero-COVID policies that prevent them from having normal lives in China. (Photo: AP)

The power of the people is never to be underestimated. History has been a witness to empires being brought to their knees by manifestations of people’s power. Several movements sprang up in the most modern era too, for instance in the widespread Arab Spring, and became inflection points leading to dramatic political and social changes.

In recent days, protests in China and Iran have shed light on how governments, regardless of whether they are democratic or not, must lend an ear to the voice of the people or face existential crises. Much the same happened in Sri Lanka where people’s privation had gone beyond the point of endurance when the nation was gripped by an unprecedented economic crisis.

There may not be total clarity yet on the disbanding of Iran’s moral police, a dreaded department of their bigger oppressive police system. But the fact that the Attorney General said it and the state media also reported it suggests that the months long protests over the mandatory hijab law, as part of a strict Islamic dress code, have had their effect and the authorities are being forced to relent.

China has also been seen easing the restrictive regulations of a “zero-Covid” lockdown in the wake of protests in many cities. The stir assumed a new and daring dimension with people even calling for the all-powerful head of the party and state, President Xi Jinping, to go. The first response to the protests may have been to hamper the students from gathering on the streets in numbers. The overall response seems, however, points to recognising that people cannot be driven beyond endurance.

Not even the theocratic government of Iran, ruling with religion as the principal tenet of life, could afford to be rigid in the face of protests that are being fed by people of younger generations who see no need to accept abridgment of common freedoms. They are not the docile types to accept all kinds of controls as a given in exchange for security of life that the state guarantees. They have been seen rising around the world, aware of the power of modern communication that enables the articulation of their shared anti-establishment views.

It took just the defiance of a humble cart puller in Tunisia to trigger a mass movement in the Arab Spring. Similarly, the death of Mahsa Amini, just 22, while in custody of Iran’s moral police in September because of a dress code violation, was the flash point of protests that echoed around the world, including in the football World Cup, where the Irainan team members refused to sing the national anthem. The diktat of the clerics has this far been enforced by the police as well as militiamen, eagerly waiting to carry out their commands, however gender-discriminatory they are seen to be.

Hundreds of deaths in the regime of the hardliner President, Ebrahim Raisi, have added fuel to the fire of the women’s movement and the disbanding of the moral police may not appease the protesters so much that they will give up their movement altogether. A good lesson has, however, been served to authoritarian governments and they cannot take the people for granted. As Shah Rukh Khan says, “Don’t underestimate the power of the common man”, and if we may add the word “woman” to the punch line of his dialogue.