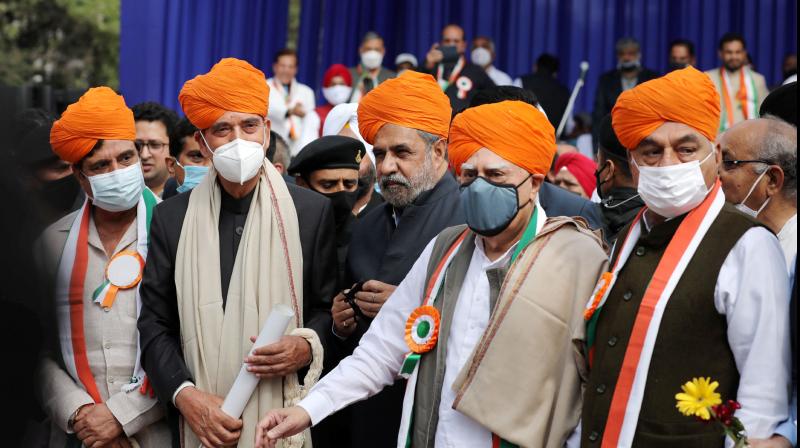 The Jammu conclave on Saturday of the 23 Congress dissidents (G-23) who wrote to interim party president Sonia Gandhi in August demanding a “full-time and effective leadership”, as well as proper internal party elections, now appears to have fully emerged as a caucus reminiscent of the ginger group that the late V.P. Singh had formed with disgruntled Congressmen to take on then Prime Minister Rajiv Gandhi.

The difference is that the anti-Rajiv dissidents challenged a PM, using the same ammunition as the rest of the Opposition, and in time became the principal Opposition. In the Lok Sabha polls that followed, Mr Singh ended up as PM through political stagecraft. This time the circumstances are very different. The Congress is in Opposition and is facing a very determined ruling party under the leadership of Prime Minister Narendra Modi. But, in Jammu, the G-23 have played their real hand.

This can be seen to be in two parts. First, Ghulam Nabi Azad, the former J&K chief minister who days ago retired from the Rajya Sabha, where he was the designated Leader of the Opposition, was projected as Congress president by one of the most important dissidents, Kapil Sibal. Two, in his own remarks, Mr Azad did not fail to make a favourable mention of Prime Minister Modi, a reference to the PM, teary-eyed, marking out the retiring Congress leader for praise in the Upper House recently.

He was critical of the BJP government at the Centre only to the extent of questioning the Modi government’s move to constitutionally reduce J&K from a state to a Union territory. He did not question the ending of J&K’s autonomy, setting himself apart from the position taken by the Gandhis in Parliament.

It’s not clear if all the G-23 leaders will be in the Azad camp for Congress president when the party elections take place. Some of them apparently also see themselves as contenders. But what became evident was that the thrust of the Jammu conclave was against the Congress leadership, though names were not mentioned. The Jammu meet leaders noted that the Congress had become weak and they had come together to strengthen it. Their other objective was to campaign against the BJP. But not much was said about the BJP at the forum.

The G-23 had launched themselves through a letter to the interim chief (which arrived in newspaper offices before it landed with Mrs Gandhi) not long before the Bihar Assembly election. They held their first formal meet in Jammu weeks before Congress will be up against formidable challengers in the Assembly elections in West Bengal, Assam, Kerala, Tamil Nadu and Puducherry, where the Congress government was practically toppled through the BJP’s manoeuvring recently.

After the Congress’ below par showing in Bihar, the caucus leaders sharply questioned the leadership. They would doubtless have the opportunity to do so again if their party fares poorly in the upcoming state polls and may even pray for the opportunity. However, it hardly behoves an official Congress spokesman in New Delhi, Abhishek Singhvi, to be critical of G-23’s Jammu show. The party election has been pushed from January-February this year to June — no doubt with the Assembly polls in view. But this was an executive decision, rather than one formally made consensually, including with the dissidents.