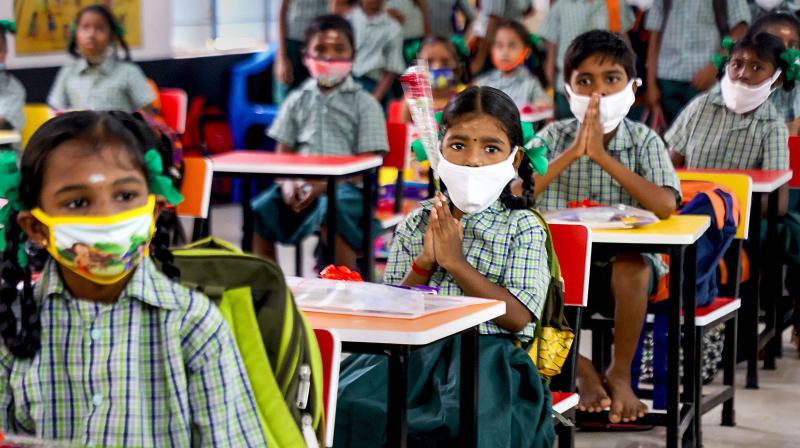 Not surprisingly, a majority of teachers facing challenges in teaching said that children were unable to catch up with the curriculum (65.4 per cent). (Representational Image. PTI)

India has had among the longest school closures in the world. There was no doubt the Covid-19 pandemic was going to impact learning adversely -- children’s learning levels suffer even after regular, scheduled summer vacations. There was an additional fear that with family budgets getting squeezed, it would also lead to an increase in dropouts, especially among older children and girls.

ASER 2020 was conducted in September 2020, six months into the pandemic. ASER 2021 was done a year later in September-October 2021 when schools were starting to reopen. According to ASER 2020, the proportion of children in the 6-14 age group not currently enrolled in school went up from 2.5 per cent to 4.6 per cent between 2018 and 2020. A year later, the out of school numbers seem to have stabilized, staying the same at 4.6 per cent. However, we may continue to see churn in enrolment numbers for a few years to come.

On the other hand, we see a secular decline in the proportion of children not currently enrolled in the 15-16 age group – which is considered most at risk for dropping out. In 2010, the proportion of 15-16-year-olds who were out of school was 16.1 per cent.

There is a third piece to the enrolment picture: paid “tuition” classes. The ASER survey routinely collects data on tuition, and the trends over time show distinct patterns across India. The incidence of tuition has increased across almost all states -- perhaps a natural response to prolonged school closures. It is curious that while economic disruptions may have moved children out of private schools (in many cases the pandemic destroyed the economy of low-cost private schools), parents were still able to access tuition classes where they had to pay fees. This may be because tuition classes are a local phenomenon where fees may adjust flexibly and quickly based on demand and supply negotiated between the tutor and the family.

This increased demand for public education in rural India, whether it is transitional or more long term, does throw up several important questions.

First, we know that enrolment does not always translate to attendance. Even before the pandemic struck, we had wide variations in daily attendance across states. In states like Uttar Pradesh and Bihar, on an average day, children’s attendance was only 60 per cent or sometimes even below. Now in reopened schools, staggered attendance patterns are being planned. This fluid situation is going to make it difficult to track attendance closely even after schools have reopened. Without regular attendance, effective instruction is difficult. School entitlements like mid-day meals, uniforms and scholarships may have greater value in times of economic hardship and disruption. It is possible that while enrolment of older children, especially girls, has not dipped significantly, their daily attendance may be affected.

Second, are government schools and teachers equipped to deal with this influx of students, especially after a period of prolonged school closures with children coming back to school with large learning deficits? School teachers in reopened schools surveyed in ASER 2021 were asked about the activities they were doing in their classrooms and the challenges they faced in their teaching. Close to 75 per cent said they were following the curriculum of the current class, though 50 per cent also said they were revising material from last year’s curriculum. A child who was in Class 1 in March 2020 would be in Class 3 when schools reopened in 2021. During this period when schools were closed, they had limited access to learning materials other than textbooks -- only about 27.9 per cent children in government schools’ Classes 1-2 in 2020 said they had got any additional learning material from their schools and in 2021 this figure was slightly higher at 31.5 per cent. Can we expect such children to suddenly cope with the Class 3 curriculum when they come back to school? Not surprisingly, a majority of teachers facing challenges in teaching said that children were unable to catch up with the curriculum (65.4 per cent).

There’s the question of resourcing. Take the case of UP, for example, where the rise in government school enrolment was the largest at 13.2 percentage points. According to ASER 2018, in over 60 per cent Uttar Pradesh government primary school children were sitting in multi-grade classrooms. In addition, only 12 per cent children in Class 3 could read at Class 2 levels and 11 per cent could do a simple Class 3 level subtraction problem. When children come back to school after 18 months of no formal instruction, learning deficits are going to be much deeper and teachers will be dealing with more children than before. The usual brief of “follow the curriculum” will only exacerbate the problem and even more children will fall behind.

Whether at a micro level, school by school or at a macro level, state by state, for the remainder of the school year, it will be critical to track enrolment, attendance and support learning at the right level. The fluidity of the current situation will make this task very challenging. But it will only be by closely watching the situation day by day, with eyes close to the ground, that effective forward planning for the next school year can be done.