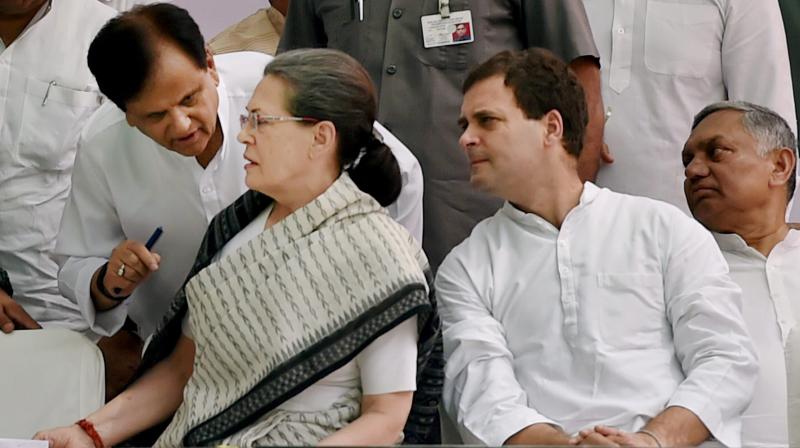 In this file photo dated May 6, 2016, Congress President Sonia Gandhi talks with party leader Ahmed Patel as Vice President Rahul Gandhi and Janardhan Dwivedi look on during the 'Save Democracy' rally at Jantar Mantar in New Delhi. (PTI)

Over the past few days, there have been numerous accounts of how Ahmed Patel managed affairs in Congress president Sonia Gandhi’s office as her political secretary. Among the various responsibilities entrusted to the late leader was to keep his boss out of the line of fire. It was left to him to tactfully handle delicate situations. A phone call from Patel generally meant he was ringing to convey some bad news. This happened with senior Haryana leader Birender Singh (now with the BJP) when he was getting ready to leave for the Rashtrapati Bhavan to be sworn in as a minister in the Manmohan Singh government in 2013. Minutes before Mr Singh stepped out, he got a call from Patel. When Mr Singh heard who the caller was, he realised he would not be joining the Union Cabinet. “I knew immediately I was out… because Ahmed Patel would not be calling to congratulate me,” says Mr Singh whenever he recounts this story. This was not the first or the last time that Mr Patel was called upon to perform such an unpleasant task. But he handled it tactfully, breaking the news in his inimitable gentle style. His general refrain was, “Sorry yaar, tumhara kaam nahin hua. Dekho, agli baar shayad kuch ho payega.”

Thanks to the enthusiastic response RJD leader Tejashwi Yadav got at his election rallies, Rahul Gandhi was convinced that their alliance was all set to form the next government in Bihar. In fact, he was so confident that he took a break in the midst of the election campaign and went off for a short holiday to Shimla at his sister, Priyanka’s house. The Nehru-Gandhi scion had even planned to go on a desert safari to Jaisalmer before the declaration of the Bihar poll results. However, these plans came unstuck because Rahul Gandhi was denied permission by the security agencies as Prime Minister Narendra Modi was due to visit the forward areas and spend his Diwali with the jawans. This was just as well as the Bihar poll results proved to be a real let down for the Rahul-Tejashwi duo. However, this did not stop Rahul Gandhi from proceeding on vacation to Goa later with Sonia Gandhi.

Madhya Pradesh chief minister Shivraj Singh Chouhan has put the proverbial cat among the pigeons with his recent announcement that he is in no hurry to expand his Cabinet. This has obviously come as a rude shock for former ministers Tulsi Silawat and Govind Rajput who had to resign their posts in October as they had failed to get elected as MLAs in the stipulated six months following their induction into the Cabinet. Both Silawat and Rajput are Jyotiraditya Scindia loyalists who had crossed over to the BJP from the Congress along with 20 other MLAs which led to the downfall of the Kamal Nath government. The two were hoping to get back their ministries after they were re-elected in the recent Madhya Pradesh bypolls. They are naturally depending on Mr Scindia to push their case but their mentor is himself waiting for the ministerial berth promised to him by the BJP as reward for bringing down the Congress government.

Ahmed Patel’s untimely demise is undoubtedly a blow for the Congress but it is a personal setback for former Rajasthan deputy chief minister Sachin Pilot who had led a rebellion against the Ashok Gehlot government earlier this year but backed off subsequently. The Congress leadership had then set up a three-member committee, comprising Patel, K.C. Venugopal and Ajay Maken to hear out Mr Pilot’s grievances and find an alternate role for him. This was in July but the panel has yet to submit its report. With Patel’s departure, it is highly unlikely that Mr Venugopal and Mr Maken will be in a rush to send in their recommendations. As it is, Mr Venugopal and Mr Maken were depending on the more senior and experienced Patel to find an amicable solution to the Gehlot-Pilot rivalry. This is certainly not good news for Mr Pilot who has been waiting to be rehabilitated for the past five months.

Soon after BJP Rajya Sabha MP and Amit Shah confidant Bhupendra Yadav was given charge of the poll campaign for the Greater Hyderabad Municipal Corporation, he immediately got down to business. He has set up shop in Hyderabad and has been approaching local Congress leaders for induction into the BJP. Realising that the Congress is on a weak wicket, Yadav and his team has been sending out feelers to the rival party’s leaders, even going to the extent of calling on them at their homes. This is the same pattern adopted by the BJP in West Bengal as the saffron party is determined to expand its footprint in the East and South. Unlike Trinamul chief Mamata Banerjee who is putting up a tough fight in West Bengal, there is no one in the Congress to counter the BJP’s expansionism.