Amitabha Bhattacharya
The writer is a retired IAS officer from the Andhra Pradesh cadre, who has also worked with UNDP and with the private sector.

NTR was above pettiness and parochialism, as his vision of Telugu Ganga, one purpose of which was to supply drinking water to Madras, shows 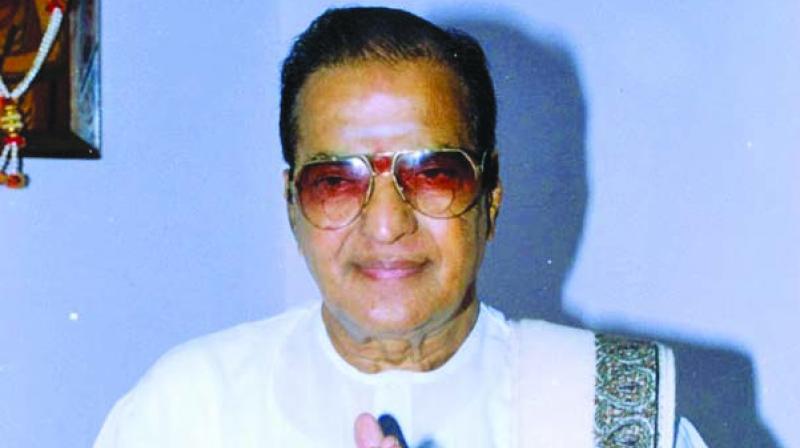 Though N.T. Rama Rao (1923-1996) appeared on India’s political firmament like a meteor, many of his achievements have stood the test of time. I remember meeting him in early 1983 in Cuddapah district, where I had just joined as collector and district magistrate. Having assumed power in January 1983 as Andhra Pradesh’s first non-Congress chief minister, he began his term with a missionary zeal. According to NTR’s biographers, Chandrahas and Lakshminarayana, a Cabinet meeting in February had 32 items on the agenda, like the abolition of the Legislative Council, a bill to provide equal property rights to women and abolition of capitation fees in professional colleges.

Interestingly, another item was finally added -- to reduce the retirement age of government servants from 58 to 55 years. His intention was soon translated into action, retiring about 18,000 officials on one day, with 12,000 more to follow. It was a most difficult time, with young people charged with the hope to fill up such vacancies. However, his interaction with me and other district officials was very cordial.

His tirade against corruption, his pursuing of institutional reforms at the village level, espousal of women’s empowerment with bold affirmative action, his all-out endeavour to make the Rs 2 per kilo rice scheme for the poor a model in the public distribution system, and similar measures catapulted him to a position few chief ministers of his time could attain. He gave welfarism a new dimension.

In January 1986, the International Film Festival (Filmostav) was being organised in Hyderabad. Earlier, I was appointed in-charge of the State Film Development Corporation and department of culture, to coordinate activities with the Directorate of Film Festivals in New Delhi, which was primarily responsible for conducting the event. Hailing from the film world, NTR wanted to make it a grand show, as indeed it turned out to be. I will narrate three incidents to give a glimpse into NTR’s personality.

One day, we were finalising the names of members of various festival committees with NTR at his residence. Suddenly, the state’s lokayukta entered the room, and said something like: “Oh, you are surrounded by your able lieutenants.” Smilingly, NTR replied: “Yes, they are my wings. Without them I cannot fly.”

Another day, I suggested Satyajit Ray be invited as a state guest whose presence would add value to the festival. NTR agreed enthusiastically, but added that Raj Kapoor, Dilip Kumar, Raj Kumar (of Kannada cinema) and “brother” M.G. Ramachandran should also be invited. Other than Ray, who could not come due to health reasons, and MGR, the rest of the luminaries attended. NTR personally received them.

A few days before the festival, NTR was upset over the list of invitees for the inaugural event. The invitations were issued by the Directorate of Film Festivals, taking the state protocol list into consideration. But NTR perhaps expected the final list to be approved by him. In a meeting to convey his displeasure, I tried to explain the process when he thundered: “I am the Protocol”. Imperial hauteur, as someone remarked!

These incidents show how endearing he could be and also how stern, if needed. A man of action, he was guided by his own light. He was not unreasonable, but not many officers could face and guide him properly.
The NTR brand of politics, built largely around personality, capitalising on regional (Telugu) pride, was not entirely novel. But he lifted it to a new height. His detractors critiqued his working style and cult status, decrying many of his schemes as populist. But his personal integrity, commitment to traditional morality and discipline, capacity for hard work and charisma were traits never questioned.

Once, after an exhausting tour of the district, NTR reached the Cuddapah guest house quite late in the night, and decided to skip his dinner. Sometime later, I entered his room to take leave and saw something unusual. He was reclining on the bed and looked pleased at the sight of a priest-like man, sitting on the floor, savour a sumptuous dinner. Did NTR offer the elaborate fare meant for him to this Brahmin, I wondered.

I was once invited to a private screening of Shyam Benegal’s Susman that was arranged for NTR. It was a realistic film showing the struggles of the handloom weavers of Pochampally village. NTR also liked it but felt that the film should have ended on a happier and more positive note, reminding me how West Bengal’s first chief minister B.C. Roy had felt about the ending of Satyajit Ray’s epochal Pather Panchali. No two persons could be more different than NTR and Roy, yet their response was broadly similar.

NTR was above pettiness and parochialism, as his vision of Telugu Ganga, one purpose of which was to supply drinking water to Madras, shows. As chairman of the National Front too, he emerged as a force in national politics. After about eight years in Mussoorie and New Delhi, I returned to Hyderabad in mid-1995 and called on NTR during his third term as CM. He was a pale shadow, not the same person anymore. One aide sought to introduce me when he said: “Yes, we are old friends.” I met him one last time to brief him about irrigation projects in the Rayalseema area that he was planning to visit. He appeared totally unmindful. He lost power shortly thereafter and passed away in a few months.

Momentous changes have taken place since NTR’s demise in the vast area where he once governed with authority. Whatever be the limitations of his approach and vision, he played his part devotedly, preparing Andhra Pradesh to emerge as one of the most prosperous, forward-looking and technologically advanced states of India.