We can only hope that the present doesn’t emulate the past to make the future murkier, darker and dirtier 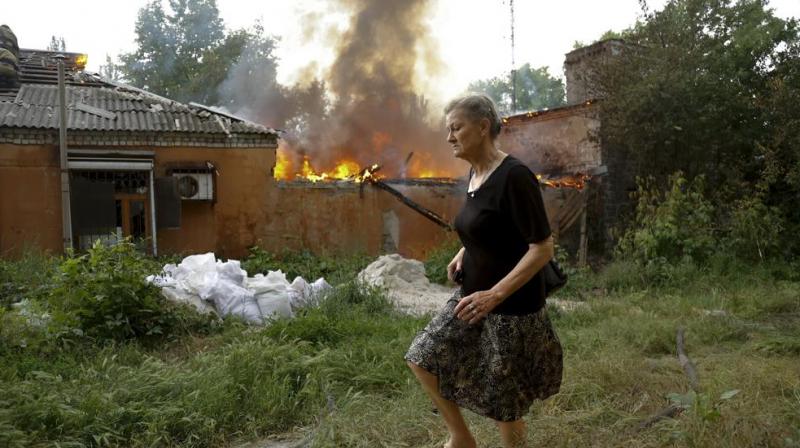 Today’s bloodbath is the legacy of myriad conflicts going back centuries. This has also triggered speculation about the potential shape and size of a post-war Ukraine. (AP)

If the Moscow-Kyiv conflict endures, with no ceasefire likely in the foreseeable future, a drastic change of the conflict zone is inevitable as and when it eventually ends. So, forget any status quo ante.

This war follows the typical European pattern of jingoistic belligerents. One can foresee prolonged post-bloodshed haggling and wrangling, and grumbling over lingering disputes, as seen in pockets of Europe. Today’s bloodbath is the legacy of myriad conflicts going back centuries.

This has also triggered speculation about the potential shape and size of a post-war Ukraine. Who will get what? Which nation, which may not be directly part of the conflict now, may be a surprise beneficiary?

The ominous signs are crystallising. Even in the best of times, Europe has rarely seen peace for long. A part of the continent has always simmered and seethed with discontent or disillusionment since mid-eighteenth century due to the continent’s lopsided development and decay, and growth on the shoulders of imperial profits at the cost of the territorial loss of poorer and landlocked units.

We can only hope that the present doesn’t emulate the past to make the future murkier, darker and dirtier. Nationalism over land has usually been the prime headache for Europe. Put the clock back one century, and see the chaos “nationalism” created for Europe’s grandeur and decline. The fall in birth rates and rise in deaths made a prosperous generation wary of physical battles on its own soil. This transformed the nature of nationalism from physical combat to cash, commerce and profit.

When the First World War ended in 1918, the concept of “national self-determination” took centre-stage at the conference table. Even imperial powers gave lip service to the fancy new terminology to keep the small, gullible powers satisfied, lest they played spoilt-sport over the possession of distant empires. Four empires (of Berlin, Vienna, Istanbul, Moscow) fell under the internal weight factor of “national self-determination”. This gave rise to the new stimulant of “aroused national sentiment” to wage war and give hope to achieve sovereign self-rule for various subject people under the European empires.

This path had been revealed earlier, during the “blood and iron” policy implemented in the mid-19th century during the “unification” of Italy and Germany. But instead of the machine-guns of the past the post-First World War world saw the birth (and rebirth) of several nations through the redrawing of maps, forcibly implemented by the victor powers.

Denmark. All the four mainland European imperial powers shrank. In one stroke, following the peace conference, the new map of Europe had 27 sovereign states, up from 21.

So great was the impact of the 1914-1918 war shock that virtually no one strongly opposed the changes. Even the newly-born USSR consented to the “secession” of Finland, Estonia, Latvia, Lithuania and Poland from the historic Russian Empire.

This political recasting of Eastern and Central Europe on a “national” basis was, however, always extraordinarily difficult and challenging due to the sizeable minorities living on the wrong side of the map. Russians

or Poles, Serbs or Romanians, Greeks or Bulgarians, Ukrainians or Turks, all constituted strong and motivated nationalists, and who remain as complex as they were in past. In the ongoing European conflict too, the minority Russians in Ukraine is a major sore point for Moscow.

What then are the possibilities today? Will Ukraine emerge as it was prior to February 24, 2022 in one piece? Will Crimea see its pre-2014 status quo ante? Will the West accept the Henry Kissinger-proposed territory “surrender to Russia”? What is Poland’s position, as it shows unusual interest in countering Russia and collaborating with Ukraine? Is Warsaw eyeing Ukraine’s land over its historical grievance against Russia? Of all the big European powers, Poland is the only one which was wiped out from the map for 124 years, from 1795 and 1919, as it was partitioned between Berlin, Vienna and Moscow.

Besides Russia itself, several countries -- Romania, Lithuania, Bulgaria, Poland and Turkey -- could be eyeing additional land in the aftermath of a peace conference. Will Ukraine agree? Almost certainly not! But what if, for the sake of “guaranteed security”, Israel is also offered a plot, to be called “West Israel”, as one of the strong nations equally friendly to Russia, Ukraine and Turkey? Didn’t the Jews face extinction in Europe? What if the Jewish state founded in 1948 in the Levant is renamed as “East Israel”, and “West Israel” gets its moorings in the Balkans, on the shores of the Black Sea, where Jews have lived for centuries, till 1945? Will Ukraine’s Jewish President Volodymyr Zelenskyy accommodate a new Jewish state on Ukrainian soil? Will Russia be happy to see Ukraine being fragmented by Israel, Poland and Turkey, subject to all accepting Crimea and the Donbas region under Russian sovereignty?

Will the European Union be relieved to see some checks and balances to reduce political tensions on its eastern flank?

In fact, two simultaneous opposing and contradictory factors appear to be at work here. First, the arms merchants want the war to intensify and continue. Second, as the EU’s economic woes spike, creating possible political upheavals leading to unforeseen eventualities, it understandably doesn’t want the destruction of its economy based on “inter-dependence” and interlinked to world trade. But then there’s the “X” factor -- the role of the United States -- which will favour the bigger game in which mega military contractors like Boeing play the pivotal role, addressing the concerns of Brussels through an extension and continuation of the war.

The long and short of the unfolding European saga is this: following the Russia-Ukraine conflict, a partition or parcelling out of terrain is an historical inevitability, in which at least five adjacent countries and a slightly distant Israel coming into the picture is more than a possibility. No major European conflict in the past 200 years has let go the opportunity to realign or redraw territorial boundaries without new entrants, or exclusions, or fixing. Ukraine is unlikely to be an exception. Poland (1795), Korea, Vietnam, India-Pakistan (1947), Yemen, Sudan, the Congress of Berlin 1878, Versailles (1919), Germany (1945), Yugoslavia (1990s), USSR 1991, Czechoslovakia -- all stand out live on the new frontier formula.

The victor powers wait to “settle” scores through “fraternal” discussions over the drafting of treaties amid high-level diplomacy; culminating in a “show” of peace for the “redistribution” of wealth, territory and resources, however short-lived that may be.

AA Edit | Crack down in Shivamogga

Sunanda K. Datta-Ray | Ukraine is a better fit for EU than Britain ever was