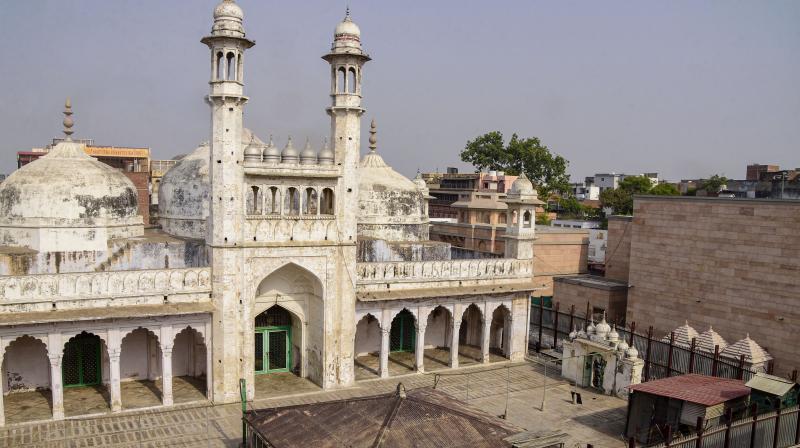 The Gyanvapi Mosque after its survey by a commission, in Varanasi. (PTI)

Our nation is at the cusp of history. A journey of some 70 odd years as an independent country is miniscule against the canvas of history.  But even nascent nations must forever bear in mind that there is a vital link between action and consequence. A wrong turn of events at the wrong time can change the future evolution of nations. India, too, must make choices, between righting the past and building the right future.

The dispute over the Gyanvapi mosque is important in this context for it is at the crossroads of the past and the future. Gyan Vapi, meaning the well of wisdom, is situated at the very spot where the Kashi Vishvanath temple, the city’s most famous shrine dedicated to Shiva, used to be. The Shivalinga at the temple was one of the 12 Jyotirlingas, which have great religious sanctity for Hindus. It had a great antiquity, finding mention in the Skanda Purana, and other ancient Hindu texts. In 1194 CE, the temple was destroyed by Qutubuddin Aibak, but was rebuilt by a Gujarati merchant in the thirteenth century. It was again destroyed by either Hussain Shah or Sikander Lodhi in the 15th century, but rebuilt yet again by Raja Man Singh during Akbar’s reign.

However, in 1669 CE, Aurangzeb definitively destroyed the temple and built the Gyan Vapi mosque on its ruins. An idea of the newly built mosque on the ruins of the temple can be gained through James Prinsep’s sketch of 1834. Finally, in 1830 CE, Ahilya Bai, the Holkar queen, built a new temple on an adjacent site.

There is little doubt that the Islamic conquest of India in the eleventh century CE left Hindu India physically destroyed and psychologically traumatised. A.K. Warder, professor of Sanskrit and Indian Studies, University of Toronto, who is not party to any side in India, writes: “The Turkish conquests of more than half India between 900 and 1300 CE were perhaps the most destructive in human history.”  Will Durant, the well-known chronicler of civilisations, is as categorical: “The Mohammedan conquest of India is probably the bloodiest story in history…” Temples in their thousands were razed to the ground; deities were mutilated; exquisite sculptures were smashed; and knowledge centres were demolished.

There is little point then of trying to whitewash history, as possibly well-intentioned historians, keen to not ignite Hindu-Muslim antagonisms, have sought to do in the past. The evidence is far too verifiable to ignore, and falsified histories create their own backlash. For instance, the Quwwat-ul-Islam mosque, built in Delhi at the Qutub Minar by Qutubuddin Aibak, still has a plaque that says: “The debris of 27 idol temples…were used in the construction of the mosque.” Some of the rampant destruction did take place on account of loot and plunder which was not uncommon in medieval (and later) conquests. But the Turkic invaders were also religious fanatics and proselytizers.

However, a breed of writers and historians still persist in trying to portray the Islamic invasion as some kind of great syncretic carnival, where the invaders came and partook of the local sweetmeats, and the conquered had a happy morsel of biryani, while both sat down to work out the Ganga-Jamuni tehzeeb that we so value today. But that cherished tehzeeb came up — and that is the miracle of India — in spite of great destruction.

This being said, should modern India be hijacked by the desire to correct the excesses of history? Should we blindly excavate the acrimonies of the past, at the cost of the future we must build?  Even more importantly, is such a project even feasible? How many mosques will we demolish or excavate, across the length and breadth of this country, before we conclude that history has been righted? The march of history has mostly — and not only in our country — been ruthless. That must be acknowledged, but can what we do today enable us to recreate a new history? All nations must face up to the reality of closure, of moving on. For, how long can we go back in history? To the Aryans? To Hindus destroying Buddhist temples, or vice-versa? Should we deny visas to Britishers because they looted us in the past, or demonise Muslims today because of what Islamic invaders did centuries ago?

Some nations have sought to constructively heal the wounds of the past. South Africa, which suffered the terrible discrimination of apartheid, set up the Truth and Reconciliation Mission in 1995 after it became a free nation. Mauritius set up the Truth and Justice Commission to calmly — and truthfully — evaluate the legacy of slavery and indentured servitude. Guatemala appointed a Historical Clarification Commission. The focus of all these bodies was restorative rather than retributive. The aim was to reconcile divided societies, not rupture them further.

India, in 1991, sought to put closure too. This was in the form of the Places of Worship Act passed in Parliament. Section 4 declares that the religious character of a place of worship existing on August 15, 1947 shall continue to be the same as it existed on that day, and any legal case pertaining to the conversion of the religious character of any place of worship pending on August 15, 1947 shall abate. A five judge Bench of the Supreme Court endorsed the relevance of the Act while delivering its judgment on the Babri Masjid dispute, in November 2019.

The learned judges pronounced that, “Parliament has mandated in no uncertain terms that history and its wrongs shall not be used as instruments to oppress the present and the future.”  This decided policy of non-retrogression is, the apex court said, “a foundational feature of the fundamental constitutional principles of which secularism is a core component”.

The past must be acknowledged but it should not hold our future to ransom. What are the priorities of an ordinary Indian: economic progress, jobs, social harmony and security, or religious strife, endemic instability, hate, violence and bigotry? If we live in the past, India will become a stagnant excavation ground. We need to put closure and move on.