Like indigenous people around the globe, India’s adivasis too have been savaged and ravaged by later people claiming to be more 'civilised' 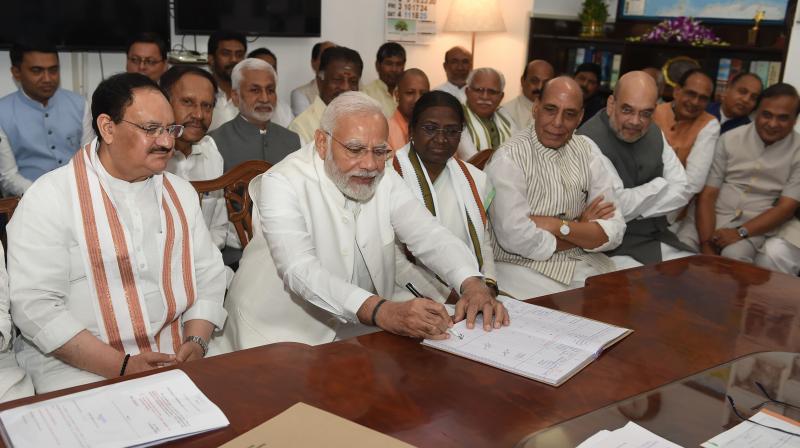 Our tribal people, who account for 8.2 per cent of India’s population, can be broadly classified into three groupings. The first grouping consists of populations who predate the Indo-Aryan migrations. These are termed by many anthropologists as the Austro-Asiatic-speaking Australoid people. The Central Indian Adivasis belong to this grouping. The late Prof. Nihar Ranjan Ray, one of our most distinguished historians, had described the Central Indian Adivasis as “the original autochthonous people of India”, meaning that their presence in India pre-dated by far the Dravidians, Aryans and whoever else settled in this country. The anthropologist Verrier Elwin stated this much more emphatically when he wrote: “These are the real swadeshi products of India, in whose presence all others are foreign. These are ancient people with moral rights and claims thousands of years old. They were here first and should come first in our regard.”

The other two major groupings are the Cauca-soid and Sino-Tibetan or Mongoloid tribal people of North India and the Northeast regions who migrated relatively recently. These two broad tribal groupings have fared much better in the post-Indep-endence dispensation.

Clearly, all Scheduled Tribes are not adivasis. There are some 573 communities who are recognised by the government as Scheduled Tribes and therefore eligible to receive special benefits and to compete for reserved seats in legislatures, government jobs, universities and schools. Most of these benefits have gone to the non-adivasi tribals.

Unfortunately, like indigenous people all over the world, India’s adivasis too have been savaged and ravaged by later people claiming to be more “civilised”. They are now easily its most deprived and oppressed section.

The biggest adivasi group, the Gonds, number about 7.4 million; followed by the Santhals, with about 4.2 million. Central India is home to the country’s largest tribes, and, taken as a whole, roughly 75 per cent of the total tribal population live there. These are the now troubled adivasi homelands. On December 16, 1946, welcoming the Objectives Resolution in the Constituent Assembly, the legendary adivasi leader Jaipal Singh Munda stated the tribal case and apprehensions explicitly. He said: “The whole history of my people is one of continuous exploitation and dispossession by the non-aboriginals of India punctuated by rebellions and disorder, and yet I take Pandit Jawaharlal Nehru at his word. I take you all at your word that now we are going to start a new chapter, a new chapter of independent India where there is equality of opportunity, where no one would be neglected.” The adivasis paid dearly for taking Jawaharlal Nehru at his word. Even if the provisions of the Constitution were implemented in some measure, if not all of its spirit and word, the present situation would not have come to be.

In the early days of our Republic, Jawaharlal Nehru, on the advice of people like Verrier Elwin, sought to insulate the tribal areas from the predations of the new order that was emerging in India. The migration of outsiders into the traditional Adivasi homelands continues unabated. Despite this, there are still 332 tribal majority tehsils in India, of which 110 are in the Northeast. Thus, there are 222 adivasi majority tehsils with a population of over 20 million, or about a third of the Central Indian Adivasi population. The Fifth and Sixth Schedules under Article 244 of the Indian Constitution in 1950 provided for self-governance in specified tribal majority areas. The Fifth Schedule covers tribal areas in nine states of India — Andhra Pradesh, Jharkhand, Gujarat, Himachal Pradesh, Maharashtra, Madhya Pradesh, Chhattisgarh, Odisha and Rajasthan. The Fifth Schedule provides protection to the adivasi (tribal) people living in scheduled areas from alienation of their lands and natural resources to non-tribals. Even this seldom-enforced constitutional safeguard now faces the imminent threat of being amended to formally effect the transfer of tribal lands to non-tribals and corporate bodies. This move has serious implications for the very survival and culture of the millions of tribal people in India.

In 1999 the Government of India issued a draft National Policy on Tribals to address the development needs of tribal people. Special emphasis was laid on education, forestry, healthcare, languages, resettlement and land rights. The draft was meant to be circulated among MPs, MLAs and civil society groups. It never was. The draft policy is still a draft, which means there is no policy.

The first NDA government, however, established a ministry of tribal affairs with an adivasi, Jual Oram, as minister. But Mr Oram fell into the bad books of the RSS when he equated Sarnaism, the tribal religion, with Hinduism, and as a minister gave the assurance that all adivasis, irrespective of conversion to Christianity or any other religion, will get the benefits due to adivasis.

But it must also be stated that this sudden concern for tribals was mostly motivated by the fears of conversion to Christianity that would preclude their assimilation into the Hindu Samaj. This fear led to the killing of the missionary, Dr Graham Staines, and his two young sons in Odisha by activists linked with the RSS.

Thus, even though the states of Chhattisgarh and Jharkhand were carved out of Bihar and Madhya Pradesh respectively, the real tribal issues relating to their culture, way of life and aspirations were not addressed. Political power has still, by and large, eluded them.

Much has happened since Independence and the failed promises of the Constitution. But it is still possible to retrieve some of the original promises. As provided by the Constitution, all tribal majority areas must be consolidated into administrative divisions whose authority must be vested with democratically chosen institutions. This body could be called the Adivasi Maha-panchayat and enabled to function as a largely autonomous institution. All laws passed by the state legislatures must be ratified to the satisfaction of the Maha-panchayat. Instead of the state capital-controlled government, the instruments of public administration dealing with education, health, irrigation, roads and land records must be handed over to local government structures. The police must be made answerable to local elected officials, and not be a law unto themselves.

Will Droupadi Murmu, NDA candidate for President, who may become India’s first Santhal head of state next month, remember the promises that haven’t been kept?

But there are also several paradoxes that must be dealt with first. The most important of these is to provide good governance in the worst of law-and-order environments. A better civil administration structure must come up in place of the present one. Perhaps it is time to constitute a new all-India service devoted to service in adivasi homelands, similar to the former Indian Frontier Administrative Service?