The Thai-Indian community came out in full strength, to make a mega-contribution to their adopted homeland, during the Covid 19 crisis 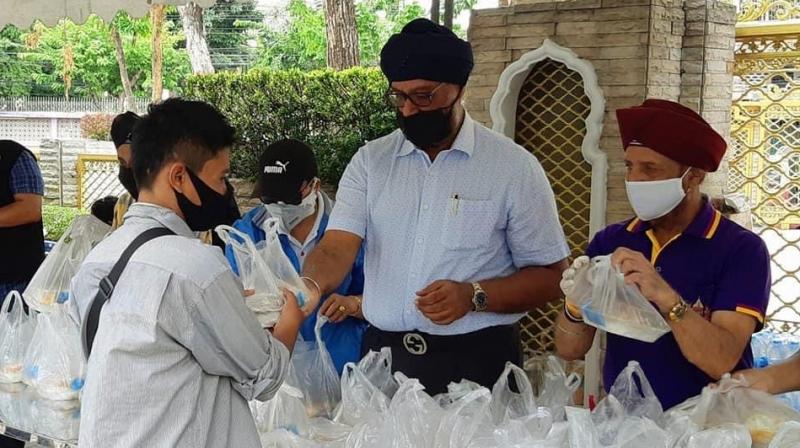 The Thai-Indian community came out in full strength, to make a mega-contribution to their adopted homeland, during the Covid 19 crisis, especially the lockdown, which had deprived numerous people of their jobs, particularly in the tourism industry which is the country’s biggest revenue-earner.

Taxi and tuk-tuk drivers, shopkeepers, street vendors, all bereft of business, stood in long queues, to receive the free packets of hot meals, household provisions, snack items, all donated by different sections of the Thai-Indian community, which won the praise of local and state government bodies.

The Sikh community is one of the largest in Thailand, spread all across the country, and they did ample seva, in the various provinces they are based in.
In the popular beach town of Pattaya, which totally depends on tourism, numerous Indian restaurants closed during the Covid lockdown.

But the 150 Sikh families living there served as many as 500-700 meals every day in three different parts of the town. The Sikh gurdwara there also distributed food and rations.

So pleased was the Pattaya government by their generosity that the mayor personally came to thank them on the last day of the lockdown. In Bangkok, many businessmen from various industries admitted that their business had crashed by 50 per cent. But that did not stop them from donating thousands of masks, shields and hand sanitisers, to many hospitals in Bangkok and outside.

Among them were Prasert Sakchiraphong, Lakhvinder Singh and Avtar Singh Sachdev, from the textiles, hotels, and baby-products businesses, respectively. Pinderpal Singh Madan, of the Sri Guru Singh Sabha, a fourth-generation Indian and prominent member of the community, said, simply: “We consider it our civil duty to give back to the country which has become our home. After all, Sikhism is one of the five recognised religions in Thailand!”

He’s particularly proud of the schools for poor students that the Thai Sikh Patronage has started around the country — 35 till now, and another 37 planned, to cover the 72 provinces of Thailand.

It was Madan who spearheaded the 550th-anniversary celebrations of Guru Nanak in Bangkok, which was attended by Prime Minister Narendra Modi himself, whom he presented with a commemorative coin.

When Madan’s two hotels closed down during Covid, he did not shut down the kitchens and instead cooked food to give to the needy, serving as many as 300 meals a day outside his two offices in Bangkok. Madan was proud that the main gurdwara of the Guru Singh Sabha served 500 meals a day, for almost the whole of last year. “Seva has always been our lifestyle, but it strengthened during Covid, as the need was greater-” he stated. “I wish we could have done more in India,” said the businessman who also has a textile factory with an office in Mumbai. “We used to outsource from China, but now we do from India.”

Sukhit Narula, of the Hindu Samaj, was happy that they could offer as many as 500 meals a day outside the famed Dev Mandir in the “Indian” district of Pahurat. He said that the religious department of the Thai culture ministry was very pleased with their generosity. Apart from food, they presented the Thai public health ministry with millions of masks and PPE’s for hospitals.

Speaking for himself, the businessman said that he personally donated thousands of masks to hospitals in more than 10 provinces of the country.
He, too, did not close production in his textile factory, which was in one the worst-affected Covid provinces, Samut Sakhon, because he wanted his 200-strong staff to retain their jobs, stay safely within the factory-precincts and not get exposed to the virus.

Calling himself an “Indian by blood”, the second-generation Thai-Indian stated that he had sent large money donations to second-tier cities in India, too, during the Covid lockdown there.

Meanwhile, the Vishwa Hindu Parishad, headed by jewellery magnate Sushil Saraff, who won the Pravasi Bharatiya Samman Award in 2017, distributed more than 15,000 kg rice and other essential food supplies in more than nine districts of Bangkok, over a period of nine weeks. They worked in close contact with the city’s district offices that monitored the social distancing measures in the long queues of jobless labourers waiting eagerly for the food-packets.

Many of the 60-odd Indian associations in Thailand were involved with large charitable food drives during the Covid lockdown, including the Telugu, Sindhi, Malayali, Tamil Muslim associations.

The Indian Association of Thailand created a webpage for small Indian vendors, to advertise their products, from chutneys to masalas, during the Covid lockdown.

The Satya Sai Foundation noted for its seva activities, also did many charity-drives during the Covid lockdown, according to Deepa Singh, president of the foundation. Their volunteers made numerous facemasks and distributed them to more than seven hospitals in the country. They also gave food supplies to varied groups of people, including Thais who had lost jobs, multi-national refugees, Indians in detention centres, Kashmiri tourists who were stuck in Chiangmai.

One of the most impressive Indian individual gestures of community-service came from Rasmegh Srisethi and her husband Aswin, founders of the digital money-transfer company DeeMoney. They originally planned to distribute free food boxes, as a CSR activity of their company. But the response was so huge, that instead of giving away 100 food boxes a day, they ended up distributing 1,000 meals a day, for several months.

The queues of people waited hours in advance, and were so long, that the local police had to step in to maintain social distancing. They named the free food-drive Thum Dee Dai Dee, meaning Do Good, Get/Receive Good.

When word spread about their initiative, numerous food and provision contributions poured in from many Indians in the community.  The food drive stopped when the Covid lockdown was lifted, and many people regained their jobs. But the entrepreneur couple has not stopped its seva, and now distributes home-cooked meals, on Sundays, in various slums in the city. “Covid gave us all time to pause, and think of what is important,” said Rasmegh.

Indian ambassador to Thailand Suchitra Durai stated with pride: “The Indian community-associations went out of their way to help both fellow Indians as well as the local Thai population during the Covid lockdown. The Sikh community was outstanding, as also the Hindu Samaj, and many others. We are proud of their contribution, as it reflects India's age-old philosophy of Vasudhaiva kutumbakam.”