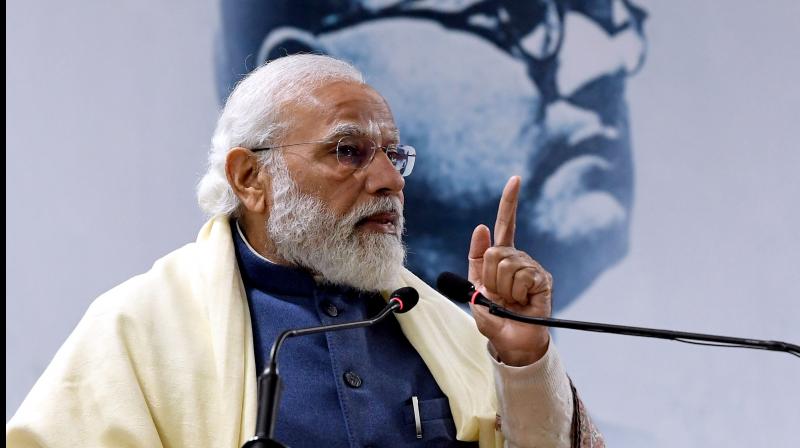 This year’s Republic Day parade and celebrations may not have a foreign dignitary as chief guest, but the Narendra Modi government, known for its proclivity for attention-grabbing decisions, has pulled out a guest of honour from the past. It may sound incongruous, but many Indians believe that Subhas Chandra Bose, just “Netaji” to most, even in his 125th birth anniversary year, will (re)appear miraculously and messiah-like resolve every crisis and woe that shrouds the nation. Why and with what purpose in mind did the Prime Minister, who has since 2013 onward, after becoming his party’s prime ministerial face, projected himself as “redeemer” and post-bhoomi pujan in Ayodhya, as “high priest”, choose to resurrect Bose and place him on a pedestal, literally, at this stage in Narendra Modi’s own political career? Does this have anything to do with the Prime Minister sensing a deficit in public support and thus requiring bolsters from the past, at a location where it will always be on display?

This year’s Republic Day celebrations are not unique merely for this reason. Not only is this the 75th year of Indian independence, but on this occasion, the government has done away with two time-honoured traditions that were part of the Indian popular imagination associated with the day. The first is the solemn ritual of the President, PM and the chiefs of the three defence services visiting Amar Jawan Jyoti, till recently underneath India Gate, and paying tribute to deceased soldiers who laid down their lives to protect the country’s territory and upholding its dignity. This tradition continued for 50 years after Indira Gandhi decided to raise this structure, small in size but colossal in its imprint on public memory. The flame of course continues in name, at another site, unsurprisingly a “new” monument raised by this government, a process that also enabled Indians to know that not just political parties, but ceremonial flames too can be “merged”.

The other tradition being forsaken is the decision to do away with the 19th century hymn, Abide with Me, which was played by massed bands at Beating Retreat, a practice that continued from 1950. The universal solemnity of the hymn, despite its Christian character, did not just add to the sombreness of the ceremony, but was Mahatma Gandhi’s favourite musical composition too for its innate capacity to enable listeners to retreat into their own selves. In its place, the replacement, Ae Mere Watan ke Logon, undoubtedly an evocative song, but it doesn’t fit into the sentiments behind the Beating Retreat ceremony, of soldiers being recalled to their “castle” in the backdrop of the setting sun. But, the sentimental lyrics of the song are essential to promote the Modi brand of patriotic kitsch that has been parroted over the past several years. The Republic Day celebrations will complete a full circle with this song for it will henceforth now begin from January 23, with eulogies at the canopy where Bose’s statue will eventually be installed and get over with the song composed and first publicly sung in the aftermath of the 1962 war with China. In the BJP’s handouts, Netaji was “ignored” by the Congress Party, a practice with Jawaharlal Nehru himself leading the “side-lining” of Bose’s memory. Advancing the start of the Republic Day festivities will henceforth provide Mr Modi with opportunity to hark on this “neglect”. The celebrations shall conclude with a reminder of Nehru’s biggest debacle, the 1962 war, for the song was rendered by Lata Mangeshkar at National Stadium, very close to India Gate in its aftermath, as balm for a grief-stricken nation and its emotionally fraught PM.

Netaji, even before the BJP’s parading of him as a “forsaken patriot” from 2014 onwards, was a much-loved nationalist in the entire country, may be more reverentially in states like West Bengal. There is also no denying that in popular lore, only two episodes in his political career “lives” among the people — the bitter falling out with Gandhi, and thus with Nehru in 1939, when he was re-elected Congress president at the Tripuri Congress defeating the Gandhi-backed Pattabhi Sitaramayya. The other chapter, much more serious for its grave implications on India’s security and eventual sovereignty in the event of Bose having been successful in his plans, is the period starting with his dramatic escape from Calcutta in 1941, raising the Indian National Army and culminating in his still “disputed” demise in 1945.

Despite the reverence for Bose over his incontestable patriotism, he remains intensely “problematic” for the overzealous “azadi at any cost” path he chose and partnered with the Axis powers in hope of driving out the British. This politically injudicious move paradoxically underscored that Bose’s bravado was hamstrung by severe limitations about his understanding of global politics and its implications for the nation.

But if this government and the BJP genuinely respect the memory of Bose, it must not any longer fan speculation over his passing. To ensure the dignified closure of his life, Mr Modi must personally lead efforts to stop the perpetuation of falsities, as his government tacitly did when the cinematic misadventure, Gumnami, was bestowed with state film awards some years ago. This however seems improbable because ideological affinity was not the reason for the BJP to embark on its “Project Netaji”.

Contrarily, a major portion of Bose’s political beliefs and convictions were against the tenets of the BJP’s ideology of Hindutva. Not only was Bose committed to the idea of an inclusive India, but he was also firmly convinced that religion had no public role to play in India. It becomes evident that the BJP indulged in glorification of Netaji and his legacy solely because, like other nationalist icons it has appropriated, Sardar Patel and Dr B.R. Ambedkar for instance, Bose is a tool to denigrate the Congress with.

In a recent video conversation with historian Anirban Bandopadhyay, Bose’s awkward legacy came up and we pondered over the possibilities of how events might have unravelled in the event of Netaji returning to India alive at the end of the Second World War. Undoubtedly, that would have jeopardised the political narrative evolving under the Gandhi-Nehru-Patel stewardship. The improbable “return” of Netaji into India’s mainstream politics would have jeopardised the career paths of leaders of every hue, even those of Hindu nationalistic orientation. This makes it evident that the new Republic Day package is little but another questionable set of decisions to bolster a faltering political narrative on the eve of crucial state Assembly elections in five states, in which the BJP is the incumbent in four.