In Doklam, in the June of 2017, the NDA/BJP government was more interested in a propaganda triumph rather than a substantive outcome 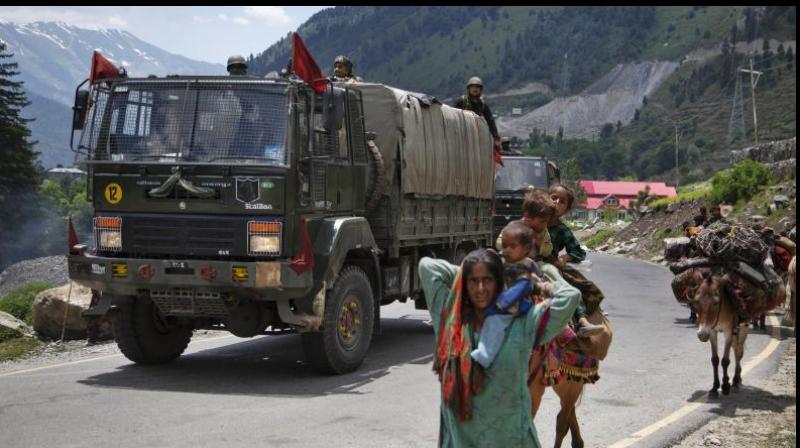 Galwan clash was the most grave confrontation after the October 20 1975 ambush by the Chinese at Tulung La in which four Assam Rifles personnel lost their lives. (Representational image: PTI)

On June 15, 2020, 20 Indian soldiers were martyred in a barbaric clash with the People’s Liberation Army (PLA) in the Galwan Valley. It was the most grave confrontation after the October 20 1975 ambush by the Chinese at Tulung La in which four Assam Rifles personnel lost their lives.

On June 20, the Prime Minister gave a rather bizarre twist to the entire tragedy when he told an all-party meeting that “neither have they intruded into our border, nor has any post been taken over by them (China)”. Then why did we lose 20 braves? Did India then intrude into Chinese territory?

Herein lies the nub of the problem qua China. The NDA/BJP government by repeatedly underplaying both the aggressiveness of Chinese intent and blatant intrusions into areas that lie within the Indian perception of what is the Line of Actual Control (LAC). This has exposed a serious chink in their armour that the Chinese have now exploited to the very hilt. That fissure is the government’s desperation to protect its narrative of muscular nationalism at any cost. It makes them both muddle and mask the truth.

The problem started way back in 2014 when Modi decided to swing with Xi Jinping in Ahmedabad deliberately playing down the Chinese transgression into Indian territory in Chumar. It is inconceivable that the PLA would embark on this adventurism on the LAC without explicit political clearance from the standing committee of the politburo especially when Xi was visiting India.

The Chinese had tried this stunt a year earlier too in Depsang plain’s area. The 19-kilometres deep incursion by an armed patrol of China’s People’s Liberation Army (PLA) into the strategically delicate Daulat Beg Oldie sector in the Aksai Chin region was noticed on April 16, 2013, and immediately interdicted by the Indo-Tibetan Border Police (ITBP). It came just weeks before Chinese premier Li Keqiang’s visit to India between May 19 and 21 and Prime Minister Dr Manmohan Singh’s visit to Japan later that month between May 27 and 30.

The Depsang incursion was designed to send twin messages. First, Chinese were experimenting their new found assertiveness after Xi’s triple anointment as general secretary of the Chinese Communist Party  (CCP), president of the People’s Republic of China (PRC) and the chairperson of the Central Military Commission (CMC). Second, it was also a caution to India against expressing overt support to Japan against the background of  steadily worsening tensions between China and Japan over the Senkaku (Diaoyu) Islands.

The Chinese were as worried then as they are today about the Quad then. The Standing Committee of the Politburo China’s top decision making forum apprehended that the US was again engaged in putting together a broader alliance in the Asia Pacific comprising India, Japan, Vietnam, the Philippines and Australia to contain China’s rise.

The Depsang intrusions were handled firmly but with élan by the then UPA government. It was acknowledged upfront that the Chinese had indeed come across India’s perception line. A firm message therefore was sent to Beijing that Premier Li Keqiang who was undertaking his first foreign trip would not be very welcome in Delhi if status quo ante was not restored. On May 5, 2013, the Chinese fell back to their default position on the LAC.

As B.G. Verghese pointed out in a signed column on May 28, 2013, “that the government can stand its ground and take farsighted decisions was proven by the way it handled the Chinese intrusion into the Depsang plain without getting rattled or pushed by chauvinistic clamour. At the end of the day, the Chinese blinked and pulled back. That the joint statement issued later did not mention the word ‘intrusion’ — the PM used the phrase ‘incident’ — signified a welcome restraint and desire to avoid teasing statements”.

However, a year later when Chumar happened on the cusp of Xi Jinping’s visit from September 17 to September 20, 2014, an over-sanguine Prime Minister desperate to flaunt his newfound importance in his backyard of Gujarat did not send word to Xi Jinping that he would not be very comfy in India if the Chinese did not withdraw before the visit commenced. Having recently won an election, Prime Minister Modi had the political capital to do that but he blinked. This set the tone for the future.

In Doklam, in the June of 2017, the NDA/BJP government was more interested in a propaganda triumph rather than a substantive outcome. Not only was the withdrawal sequential rather than simultaneous with India withdrawing first, but the Indian government took its eye off the ball and allowed the Chinese to occupy substantial parts of the Doklam plateau within one year of the standoff.

This was followed by the opaque summits in Wuhan in 2018 and Mamallapuram in 2019. A subservient media and a deferential strategic community did not ask the hard questions as to what really was achieved at these informal tête-à-tête’s. By that time the Chinese had sussed out the Indian leadership and had concluded that were they to launch an intrusion across a broad front along the LAC the NDA/BJP government would cover it up rather than deal with it candidly.

This is precisely what happened in April 2020. When the Chinese decided to saunter across the LAC first the government tried to palm it off to differing perceptions of the LAC.

In fact, they had already started running this narrative from December 2019 onwards. Speaking in the Lok Sabha on December 4, 2019, defence minister Rajnath Singh said, “Due to different perceptions of the LAC, sometimes incidents of incursion occur. I accept it. Sometimes the Chinese Army enters here and sometimes our people go over there.”

The government stuck to this chicanery from April to the June of 2020 as a mortified country bristling under a harsh lockdown was trying to keep body and soul together. Only after the Galwan tragedy when the body bags could not be kept under the wraps did the nation wake up to the enormity of the challenge. There again the Prime Minister unleashed the mendacities that he has perfected to an art form much to the delight of the Chinese as it endorsed their position that they have never intruded into Indian territory.

One year later this sad saga continues unchecked. After vacating significant territorial positions on the South Bank of Pangong Lake under a yet-to-be-microscopically-evaluated disengagement plan the government tries to escape the antiseptic glare of sunlight by not even allowing Parliament to have a full-fledged debate on perhaps the most portentous national security challenge that India faces today.