The challenge on the economic front now seems to be to place India as a strategic part of the global supply chain, a position China occupies 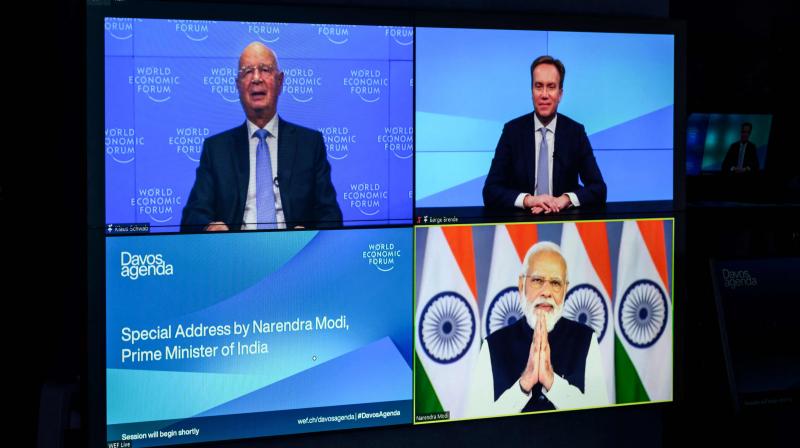 Global business leaders attending the virtual meeting of the Davos-based World Economic Forum on January 17 must have heard Prime Minister Narendra Modi and Chinese President Xi Jinping with curiosity, if not with rapt attention. The two Asian biggies hold great interest for the world, and the West in particular. They tend to see democratic India as an ideological ally against Communist China. Mr Modi, in his opening remarks on Monday, emphasised the virtues of Indian democracy. While the critics of Mr Modi and the ruling Bharatiya Janata Party at home consider the Prime Minister and his party as undermining the democratic institutions and processes in the country, the Prime Minister often flaunts Indian democracy as a trophy to the West.

Perhaps he realises that the preferential treatment for India will depend largely on the democracy label. Mr Modi is keen about attracting foreign investments to India, something that he has been assiduously canvassing in Davos ever since he became Prime Minister, and he has done the job diligently. He said the temperament of India’s youth is entrepreneurial, and as proof he cited the fact that there are now over 7,000 start-ups, of which 70 are unicorns, with 40 of them emerging in 2021. He said these young Indian entrepreneurs are waiting to work with global investors. He also said key sectors have been thrown open to private investment, including defence, aerospace and telecom. There seems to be the nagging feeling that FDI inflows are not enough, and that foreign manufacturing must base itself in India. He said that the “Atma Nirbhar Bharat” policy was to make in India for the world. He cited the improved ease of doing business index of India. It is not clear, though, whether it would help. Mr Modi struck a sober, and even a modest note, compared to his expansive speech at Davos in 2018.

In contrast, President Xi Xinping of China expounded the philosophy of contradiction, taking a leaf from Mao Zedong’s “celebrated” thesis. He said: “The world is always developing through the movement of contradictions; without contradictions, nothing would exist.” He criticised the Cold War mentality and the moves to erect protectionist walls, and decried hegemony and bullying, the two things that China has no hesitation in using! He declared: “China will stay committed to reforms and opening up.” And he went on to add that China welcomes foreign investments if they comply with national laws. Speaking of the tussle between economic growth and ecological preservation, he said: “We should never grow the economy at the cost of resource depletion and environmental degradation, which is like draining a pond to get fish; nor should we sacrifice growth to protect the environment, which is like climbing a tree to catch fish.” There is little doubt that Mr Xi is imitating Mao and Deng Xiaoping and hopes to get into the canon with his homilies!

The India-China duel, which spans the political, economic and strategic spheres, is not something that will be settled in a single forum, whether it be at the United Nations or the Shanghai Cooperation Organisation (SCO). Despite the strained relations, Brics (the grouping of Brazil, Russia, India, China and South Africa) seems to be surviving, and the New Development Bank (NDB) is making quiet progress. Egypt has been admitted as a member in December 2021. At the same time, there is attrition in Ladakh and along other segments of the undemarcated 3,500-km-long Line of Actual Control (LAC), with the June 15, 2020, flareup resulting in the death of 20 Indian soldiers and many more on the Chinese side, and the continuing rounds of talks between the military commanders in the field. Unsurprisingly, Mr Modi and his party are remaining quiet about the India-China stalemate because they realise that it is a tough situation.

Despite the glimmer of hope about the economy turning around quickly, the momentum has not yet picked up. That should be a matter of real worry for the Prime Minister and the government. The challenge on the economic front now seems to be to place India as a strategic part of the global supply chain, a position China now occupies. Though Mr Modi has declared India as the “pharmacy of the world”, it is evident that even while India dominates the generic drugs and vaccine market in the developing economies, it is not yet the leader in terms of research and development. That position is still occupied by the multinational pharmaceutical giants with their cutting-edge research. The Indian government is still looking for shortcuts and “quick fixes” to make the economy strong. It seems that the Narendra Modi government hasn’t realised that there are no short-cuts to the top.

Global businesses still look to India with a lot of expectation, but they may have to continue to transact with China more than ever. The hope that the Modi government entertained after the outbreak of the Covid-19 pandemic in 2020 that foreign businesses would shift out of China and that India will be the natural alternative has not played out according to this script.

What Indian economic strategists will have to review now is the reason for the lukewarm attitude of global businesses to rush towards India. Infrastructure is a key hurdle, and so is the issue of a skilled and cheap workforce. India has neither. Mr Modi must be aware that after seven and more years in power, it would not help to blame the Congress for the country’s economic sloth. At home too, the private sector is also not too enthusiastic about investing and spending. The start-ups and unicorns are good signs, but they are too weak to revitalise the economy.

The rasping chorus of right-wing Hindutva groups are harming India’s image more than many in the government may imagine, and sending out negative signals. This seriously impacts India’s economic prospects. The idea that vigilantism can have free play and the market will operate in its own sphere is simply not working. A Hindutva-dominated polity cannot be a market-friendly place. This is the inconvenient fact staring Mr Modi, Yogi Adityanath and Union home minister Amit Shah in the face.

Hindutva majoritarianism blocks economic growth. Hate speeches and acts deter economic prospects. It is not enough for Mr Modi to play lip service to the country’s social diversity. He has to acknowledge the fact that India is a multi-religious society, and not just a multi-cultural and multi-lingual one.