Its defining feature can be summed by a phrase in it: “nothing about us without us” 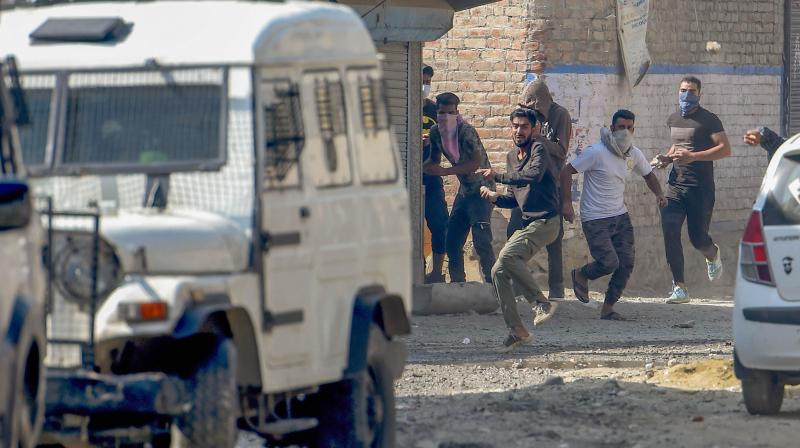 : Protesters throw stones on security personnel after an encounter with militants, at Batamaloo in Srinagar. PTI Photo

On August 5, 2019, the Narendra Modi government embarked on a dangerous and destabilising course by tearing up the delicate arrangement Free India entered into with Maharaja Hari Singh on the morrow of Independence.

The compact, in the shape of Article 370 of the Constitution, gave Kashmir considerable autonomy (as is now being negotiated with the Nagas). On August 22 this year, just 12 months after constitutional havoc was wreaked, accompanied by unremitting repression, Kashmir announced its riposte.

The riposte was resoundingly peaceful. It was contained in a document that its authors called “Gupkar Declaration II”.

The manifesto, which holds the promise of a fightback by ordinary people in Kashmir, relying only on constitutional means, if the parties that are signatory to it can hold their nerve in the face of both repression and allure, the twin instruments that go with the orchestration of tyranny.

Not to put too fine a point on it, the basis of the promise of Gupkar II is, as of now, no more than a piece of sophisticated political imagination.

Its defining feature can be summed by a phrase in it: “nothing about us without us”, which seems to constitute a direct challenge to the militaristic, semi-fascistic, style of governance in Kashmir.

On the practical side, Gupkar II underscores that all political activities to be undertaken by the six signatory parties will be “subservient” to the restoration of Kashmir’s autonomy as captured in Article 370.

At this stage, there is nothing specific about public participation in taking the Gupkar II message forward.

The fundamental reason for this is the disdain for mainstream parties that has developed among ordinary people since the August 5, 2019 crackdown.

These parties are now held guilty of having sided all these years with New Delhi which trifled with Kashmir’s dignity -- indeed, even putting mainline politicians themselves in jail in the same manner as the separatists and the extremists, as if to the BJP rulers they were all the same.

It is the irony of the situation that is sought to be underlined, and it is an irony which, subtly conveyed by interested actors, transmutes into disgust for New Delhi, which gets easily transferred to those who are seen as having represented it in the Valley.

For all that, however, a very negative mood against the BJP sweeps the Valley, and it is this that is likely to sway people’s behavior when Assembly elections are held -- whenever they are held, and especially if the authorities perversely go on delaying it.

The BJP was once a welcome name in Kashmir due to former Prime Minister Atal Behari Vajpayee’s solicitousness toward it.

The goodwill was transferred to Prime Minister Narendra Modi until his party’s true colours were revealed, ending in the stripping of J&K’s autonomy and Kashmir’s downright derogation and false depiction -- for communal motives -- as a land of Pakistan-inspired terrorists.

In the past three decades, Kashmir has seen extremist and terrorist violence, principally an aspect of Pakistan’s covert and overt war against India, but also lately developing an indigenous component.

But now, if Gupkar II can take off, New Delhi could face two very separate battlefields in Kashmir -- one constituting the extremist-terrorist-separatist variety and, in addition, the newly created second front comprising mainstream political parties.

The latter campaigning for the restoration of Article 370, and not only J&K’s statehood, are likely to get to be quite a handful unless, in the coming weeks and months, they are forcibly prevented from campaigning.

So there could be greater repression, helping the extremist cause psychologically and politically, and, indirectly, Pakistan, in the process infusing greater strategic uncertainty into a region already beset with hostile Chinese military activity.

Should this materialise, few will miss locating its origins in the ideology-laden hubris which has been the hallmark of Modi, Shah & Associates, a partnership that has been so blind as not to see that the mainstream parties of Kashmir have been made victims of terrorist violence because they were seen as accomplices of Indian democracy, which has shown up in Kashmir in badly faded colours.

Gupkar II was preceded by the original Gupkar Declaration of August 4, 2019, enunciated just a day before the constitutional stripping of J&K. Leaders of the mainline Valley parties, who intuitively knew that the omens were all bad, had assembled at the Gupkar Road residence of National Conference chairman Farooq Abdullah, although they were regional rivals of the NC.

They resolved, just before being imprisoned, that they would remain “united” to preserve Kashmir’s constitutional status.
Gupkar II is a reaffirmation and a resolve for further action.

But its distinguishing feature is that in addition to the regional parties that had met in 2019, two national parties -- Congress and CPI(M) -- also joined them at Dr Abdullah’s residence on August 22 this year.

A few days later, the CPI in Kashmir extended unqualified support. This makes Gupkar II not only a document of Kashmir but a document for the nation. This makes it unique in Kashmir’s annals.

It is instructive that its arch opponents are the BJP and the Narendra Modi government, the suave professionals who spread the Jamaat-e-Islami narrative in the Kashmir Valley, and Pakistan’s military establishment if the signals are read right.

This is an impressive array of foes for a group that espouses peaceful and constitutional means to return to the old normal.

Can history be re-injected? It is hard to say. But it is worth remembering that the official move to break Kashmir’s spirit constitutionally was stoutly opposed in Parliament in August 2019 by the Congress leadership, the Left parties, the DMK, RJD, and Trinamul Congress.

The BJP’s important Bihar ally, the JD(U), also opposed it. Another BJP ally, Akali Dal, spoke against the bill but was obliged to vote with the government.

This is an impressive number of parties standing up with Kashmir in Parliament. In addition, the principal sections of the mainline media too disapproved of the government’s action.

And yet, regrettably, there seems a concerted effort in some quarters in the Valley to spread the disinformation that India slept soundly through the process of Kashmir’s belittling by the Modi government.