Opinion   Columnists  17 May 2021  Sanjaya Baru | The mango as a metaphor: The pluralism of our palate & politics
Opinion, Columnists 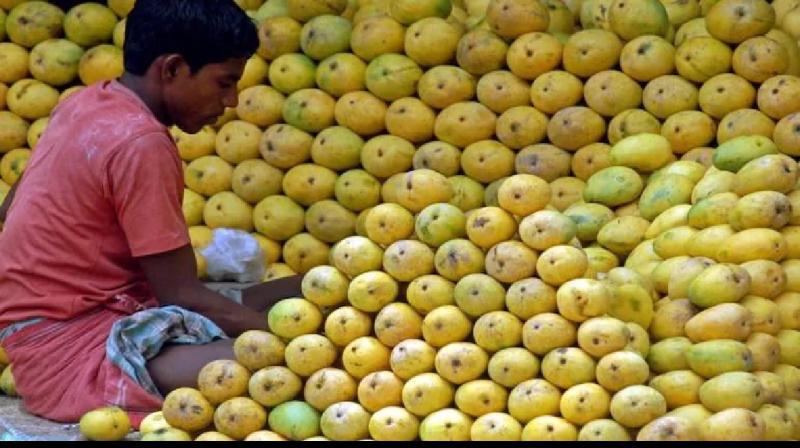 An Indian hawker arranges mangoes at a roadside shop in the southern city of Chennai. (Photo: Reuters)

For the second year in a row Covid-19 has disrupted India’s mango exports to the United States because the two governments have not been able to devise a solution to the problem of securing US government clearance of export consignments. India’s mango exports to the US were the fruit of prolonged negotiations that finally came to fruition as part of the new strategic partnership inaugurated by President George W. Bush and Prime Minister Manmohan Singh.

In June 2007 I was presented with the opportunity of handing over the first basket of mangoes legally imported into the United States to then US secretary of state Condoleeza Rice at the annual meeting of the US-India Business Council (USIBC) in Washington D.C. I insisted that the USIBC include in the basket that I was to hand over to Ms Rice at least ten different varieties of mangoes, and not just the most popular export variety -- Alphonso or Hapus.

While presenting the basket I said to Ms Rice that it represented India’s national motto -- unity in diversity. Every Indian regards the mango as the “king of fruits”, I told her, but each Indian has his/her own favourite variety, and most of us can get very argumentative about which is the best variety.

The diversity in the subcontinent’s preference for its favourite fruit is a metaphor for an India that is home to around 1,500 varieties of mangoes. While Maharashtra’s Alphonso and Gujarat’s Kesar dominate the export basket, other varieties like Andhra Pradesh’s Banganapalli and Uttar Pradesh’s Langra are also being increasingly marketed around the country and exported overseas.

But the immensely popular mango is not the only edible symbol of unity in diversity. Consider the case of the biryani. The social media has seen from time to time animated arguments about which is the best biryani among biryani aficionados and the authority of food columnists has often been summoned to pass judgement. Yet, between the biryani of Malabar, Bengal, Hyderabad, Lucknow, Chettinad and a dozen other places, it is difficult to select the best.

In the larger discussion on India’s plurality and diversity, the culinary preferences of over a billion and a quarter people does not get the attention it deserves.

Just as most Indians who agree that democracy is the best form of governance would have sharp differences on which political party they would support in the interests of preserving that democracy, most of us would be united in our view that Indian food is the tastiest in the world, and yet argue about which part of India offers the most scrumptious cuisine. Unity in diversity is written into our social and cultural DNA.

But when they discover that “Rayalaseema ruchilu” can be very different from “Telangana vantakalu”, they give up looking for a common thread.

I have so far made a series of fairly obvious observations. Who would disagree with any of these statements? If we are a land of 1,500 mangoes, we are also the land of 15,000 gods and goddesses and 150,000 local deities. While the Constitution recognises 22 official languages, close to 20,000 languages and dialects are spoken as the mother tongue across the subcontinent.

The miracle of Indian democracy and development is that despite this diversity the country has remained united and the roots of national unity now run deep into the soil of Mother India. Against this background, the desperate attempts by certain political elements to impose one religion, one language, one election on this diversity is an insult to the national imagination and an affront to our national personality.

It is, therefore, not surprising that the resistance to the “Hindu-Hindi-Hindustan” project has most recently been asserted by a clutch of regional political parties in the non-Hindi-speaking states.

The electoral victory of the Trinamul Congress in West Bengal and the DMK in Tamil Nadu are only recent examples. They remind those who need reminding that diversity has never been India’s weakness.

Rather, it is its strength since it prevents the emergence of majoritarian authoritarianism.

If there is one lesson that the present political leadership in New Delhi should re-learn, it is that India cannot be governed as if it was a land of homogeneity. Unity is rarely imposed on a nation from the outside. It is the product of shared values, interests, culture and experience.

There is much that political and religious leaders can learn from the preferences of the Indian palate. The national popularity of a dosa and a tandoori naan has not been imposed on us by any overbearing political philosophy of national unity. They have become popular across the length and breadth of the subcontinent because, like the majestic mango, we have all come to like their taste. We have our own favourite biryani and we love our own language, but we recognise that we belong to one nation.

The writer is an economist, a best-selling author and former adviser to Prime Minister Manmohan Singh. His latest book is India’s Power Elite: Class, Caste and a Cultural Revolution.