Probal DasGupta
The writer, a retired Army officer, is the author of Watershed 1967, based on a forgotten war between India and China, and a member of the guest faculty at New York’s Columbia University. 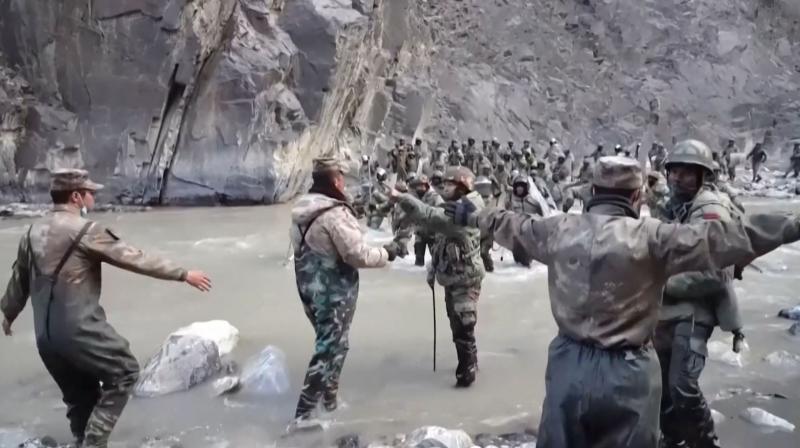 PLA soldiers who died in Galwan clash were never recognised by China or given honour by their country, as the fallen Indian soldiers received. (CCTV/AFP)

A year has passed since Colonel Santhosh Babu and his band of gallant men from 16 Bihar Regiment laid down their lives in the Galwan clash against the PLA, the Chinese army. The fateful night, a year ago, which claimed their lives will not go down in history as yet another night of betrayal by a bete noire whose characteristic reliance on deceit and denial is well known.

Instead, on this occasion, Col Babu’s bravehearts decided to not let the enemy’s surprise moves stun them. They acted fearlessly and inflicted upon an armed enemy a number of casualties they had never expected. These brave soldiers set into motion the template of India’s actions to follow in Ladakh against an enemy that had broken a soldier’s code of conduct. The Indian Army redoubled the aggression and vigil against China along the LAC.

Through their brave actions, they exposed Chinese doublespeak about honour and patriotism. PLA soldiers who died in Galwan clash were never recognised by China or given honour by their country, as the fallen Indian soldiers received. Col. Babu, in his death, showed that a courageous leader on ground can expose the machinations of a powerful nation known for its doublespeak.

The fateful incident was followed by action in August when the Indian Army outpaced the Chinese to dominate heights of Kailash ranges in eastern Ladakh and put China at a disadvantage.

On a strategic level, two countries slid down a path farther away from normalcy. The PLA increased its presence along the LAC and reinforced a robust rear infrastructure to support the forward troops. India too ramped up troop deployment and infrastructure on high priority. Galwan began a clamour for India to widen its sphere of rivalry with China and take advantage of the oceans.

It opened up Chinese insecurity about India’s advantage in the region, especially the Indian Ocean region. Thus, China rebooted its influence in Sri Lanka, Nepal and Myanmar. India finally shed its inhibitions about expressing closeness to the US and finally threw its lot with the QUAD club.

American interests had traditionally aroused suspicion in India, but in 2020, China made sure it was a choice thrust upon India in the face of medieval hostilities and unconcealed belligerence. Indians are sometimes misled by history to often quote that this Indian Army is no longer the Army of 1962. Such an analogy is misplaced and ludicrous.

History has had two battles and standoffs between India and China since 1962. Those were in 1967 and 1987: India triumphed over China both times, once by inflicting casualties and on another occasion without firing a single bullet.

Therefore, when the Indian Army took the Kailash heights in August last year and turned the tables on China, it was a reminder of 1987 instead, when the PLA was pushed back without fighting a battle.

Over four decades had passed without a single bullet being fired by the two countries at each other. And then, China disrupted history. It all started with that fateful night, when Col. Babu and his band of gallants walked up to the Chinese to ask them to leave.