Is India’s fabled 'steel frame' only creaking or is it screaming? 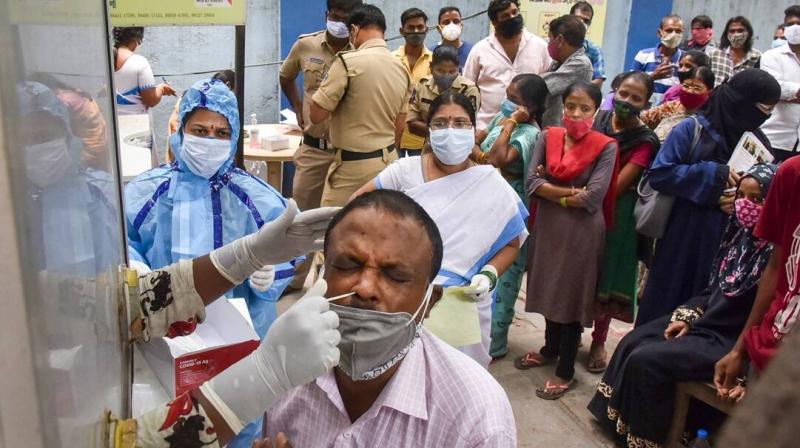 The coronavirus pandemic surge has devastated big cities including the capital and brought the healthcare system to its knees. (File/PTI)

The coronavirus pandemic surge has devastated big cities including the capital and brought the healthcare system to its knees. India has now been recording the highest number of new coronavirus cases in the world and the death toll is mounting.

The second wave of the pandemic has spared no one, not even the elite administrative services that are charged with oiling the wheels that run the nation. According to sources, more than 100 senior officers, including IAS, IPS, IRS and others, have lost their lives to Covid. The news of the deaths of senior babus including Bihar chief secretary Arun Kumar Singh and three of his 1985 batchmates — former CBI director Ranjit Sinha, former secretary, department of land resources, R. Buhril and serving director of the panchayati raj department in Bihar and many others — has got the babus rattled.

Further, the president of the UP IAS Association Deepak Trivedi and additional secretary of health in Bihar R.S. Chowdhury too died, both within a week. In recent weeks, nearly two dozen top babus across central government ministries and departments, including the health ministry, have tested positive for the coronavirus.

The severity of the epidemic has hit home. When even the powerful in the land are not safe and anxious about their health and that of their families, they are pushing the panic button. The “System”, normally a bulwark against the vicissitudes of fate that often visit upon the citizenry, has collapsed this time. It must be a novel experience for the nation’s elite administrators. Clearly, the old trusted “networks” and reliable connections have failed.

Naturally, none of them can say this openly but India’s once-fabled “steel frame” has bent and buckled in the face of the pandemic headwinds. The creaking is audible, even if it actually feels like screaming.

Mamata brings back cops transferred by EC After her hard-fought victory in the recently concluded state Assembly elections, West Bengal chief minister Mamata Banerjee is busy setting her house in order. This has primarily meant that she is bringing back a large number of senior IPS officers who had been transferred by the Election Commission during the campaigning.

Sources say that within hours of taking oath for the third consecutive time, Didi brought back senior IPS officer Virendra as director general of police. Virendra will be retiring this month. Similarly, Vivek Sahay has been reinstated as director of security.

Sources say that the state government has decided to clean up the mess in police administration and issued transfer orders to a large number of IPS officers whose role during the election period has been seen as not only doubtful but in violation of norms.

However, the return to “normalcy” may take longer. After reports about the violence that erupted in certain parts of Bengal after the elections, the ministry of home affairs has deputed a team of top home ministry officials led by an additional secretary-level officer to undertake a fact-finding exercise in the state to assess the “ground situation”. This again is likely to set off a fresh round of friction between Didi and the Centre.

EC split down the middle

The Election Commission (EC) is split down the middle over its response to the censure by the Madras high court on its role in conducting elections during the second wave of the Covid-19 pandemic. The EC has approached the Supreme Court against the censure, but its petition was swiftly rejected. One of the panel’s counsel has resigned stating that his “values are not in consonance with the EC’s”.

Many remember what happened the last time when there was a schism within the Election Commission. In the 2019 general elections, the then Election Commissioner Ashok Lavasa had opposed the clean chit given to Prime Minister Narendra Modi and former BJP president Amit Shah on charges of violating the election model code of conduct. We all know how that went.