Political watchers believe a new axis is forming, which pitches the Modi-Shah combo against the Gadkari-Yogi jodi 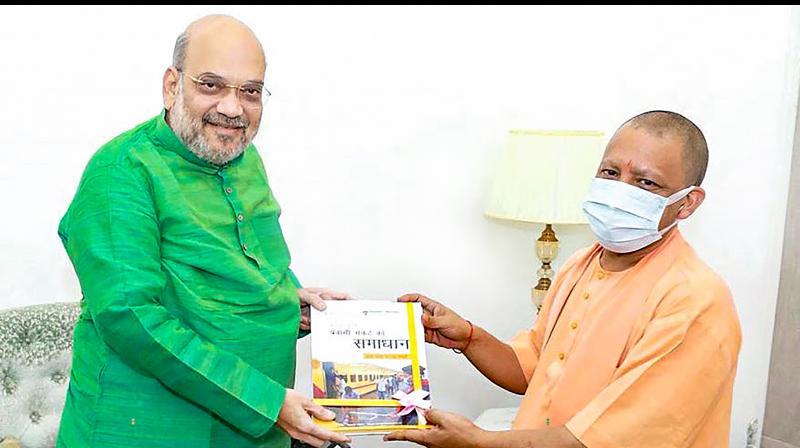 I love it that we’re a chilled-out country so accepting of dramatic contrasts. I mean that! For centuries, we have absorbed absurdities and carried on like it’s no big deal. Last week’s headline grabbers couldn’t have been more startlingly different! One, a mysterious femme fatale in Antigua, the other a saffron-robed chief minister of our country’s most populous state. In both cases, their newsworthiness was hinged around perfect timing! “Bombshell Barbara” is getting her cues so on point (wonder who’s tutoring this one!). So is Yogi Adityanath (err… we can guess who his tutor is!). Both protagonists are armed with enough lethal ammo to blow up a few very important reputations. There is a third high-profile player. Harish Salve, who’ll attract almost as much attention in the weeks to come as these two.

Let’s start with “Bombshell Barbara”, who’s living up to the old chestnut… “Cherchez la femme” … in the ongoing extradition saga featuring a disreputable and disgraced diamantaire from India -- the infamous Mehul Choksi, maternal uncle of an equally “wanted” diamantaire Nirav Modi. The brilliant Harish Salve has his work cut out for him, in a way. He has announced he’ll succeed in getting back the fugitive diamond merchant either hiding out or being held hostage in Dominica, who ran off with Rs 3,500 crores of public money in the PNB scam. Please note, Shri Salve is saying this feat will be achieved in weeks, not months! That’s Salve for you -- brilliant, mercurial, well-connected, super-confident and successful.

While we hold our breaths for the “Return of the Jewel Thief”, the adventurous lady playing a starring role in the high seas action drama in the Caribbean is attracting a great deal of attention -- not just from Choksi’s wife Preeti, but the media at large. The official “Jab we met” versions keep changing, but when the kidnapping story broke, Barbara was khullam khulla described as Mehul’s girlfriend. Till loyal wife Preeti protested and staunchly denied a romantic liaison, choosing to describe Barbara as a family friend who had tricked her sweet husband into accepting a “dinner appointment” (Preeti’s decription). That too, at 5.30 pm (why not call it “high tea” with nashta paani?). Between the wanted man and the bombshell, we expected a tad more action. What was this innocuous, chaste “appointment” Preeti was talking about? Please, madam, do describe it as a hot and daring dinner date a deux, then we are talking! Oh, wait a minute, when did the Bewakoof Barbara discover that she’d been had by Mehul Choksi in more ways than one? When did she find out she was just one more greedy woman conned by Mehul, who she alleges wooed her with “priceless” diamond trinkets, which turned out to be fake! During their “long walks” and “relaxed evenings”? As they say, beware the wrath of a woman diamond scorned… After the scandal broke, Barbara has been singing like a canary with a sore throat. Alas, there go her dreams of becoming a real estate tycoon in Antigua --another false promise made by Mehul to keep his lady love interested, while he figured out his next move -- some say to Cuba. Maybe what he didn’t figure was the classic honey trap -- “The End” -- to his pyaar mohabbat!

Diamonds are forever, as the tagline goes. But Mehul was peddling cheap glass. God knows how many high net-worth customers in India have been similarly tricked by Mehul and his understudy Nirav. Funny part is, the cheated ladies can’t file charges -- those supposedly priceless and rare stones were probably sold minus receipts, to greedy and gullible clients eager to park unaccounted money in easy to store heera motis. I can visualise these ladies staring glumly at their obscene rocks and wondering what to do with the useless baubles. Meanwhile, “Bombshell Barbara” may be busy selling the rights to her story to Netflix. This is “Pirates of the Caribbean”, without Johnny Depp! But with a roly poly Mehul Choksi playing Humpty Dumpty.

On the other side of the news cycle is a diminutive “ascetic” who is making some badass moves in Uttar Pradesh. Clearly prepping for the Assembly elections in 2022. Yogi wants it to be his solo show, not a group exhibition. Clearly, he is being backed by his RSS bosses, and encouraged to assert his individuality more emphatically, in order to defuse any argument as to who calls the shots in UP -- Modi or Yogi? Political watchers believe a new axis is forming, which pitches the Modi-Shah combo against the Gadkari-Yogi jodi. If true, this could also pave the way for new power structures across India and dent the invincibility of those currently holding the reins at the Centre. Yogi, after several disastrous errors of judgment (all that nonsense about love jihads, anti-Romeo squads), quickly got his act together and took a firm position against the anti-CAA riots in Muslim dominated areas. But then came the horrifying sight of Covid corpses floating down the rivers of Yogi’s vast state of 240 million! Not good! Not good! Satyanaash… But hey, he bounced back swiftly! Fans and supporters are pointing out how he tamed and tackled the Covid-19 numbers, even managing to beat other states at keeping cases down. The interesting thing is this: that even the hardcore, hard-bitten BJP supporters are now uttering Yogi Adityanath’s name in the same breath as Narendra Modi’s. Sacrilege! And hello!

Nobody is demanding their heads on a platter. They are also insisting Yogi is their guy. The main man.  Which means the highest of the high commands is okay with the new narrative and is in fact encouraging such public talk. Frankly, this is a positive development -- absolute power corrupts absolutely, as we all know. Throwing in a serious challenger to NaMo at this critical stage (the run-up to Elections 2022) is a smart, shrewd move. It means all players will have to work that much harder to win this round.  It also signals Yogi’s elevation to a more visible, pan-India position, from where he can leverage and consolidate his image before the asli biggie -- the national elections of 2024. The person who should be watching these developments closely is Mamata Didi, given her prime ministerial ambitions. These two make worthy rivals -- both come with their single-and-not-ready-to-mingle status: the guy is a Yogi and the lady is a Yogini. Their followers worship them and believe that they can do no wrong. The race to the hot seat has suddenly got hotter!