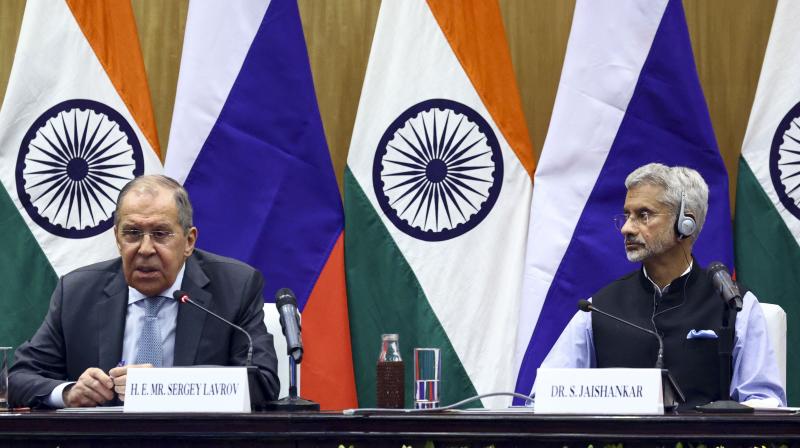 Russia’s long-standing foreign minister Sergey Lavrov was in New Delhi and then proceeded to Islamabad earlier this week in a quest to build on Moscow’s interests-based diplomacy in the wake of the emerging global reset in 2021, which has seen it very active over Afghanistan. Strangely, the hyphenation of India and Pakistan for a high-profile Russian visit is a first of its kind and symbolises the changes that the world order and alignment is seeing. This was the old world way the United States used to run its foreign relations in South Asia, but India’s tearaway progress and enhanced comprehensive national power led to a de-hyphenation.

In the last 12 months, Russia may have remained comparatively less significant except in the brief period of the SCO meetings in September 2020, leading up to the summit in November 2020. China’s belligerence at the Ladakh border with India saw India being pushed further into the American camp.  The United States aims at keeping Russia out of the Indo-Pacific order of nations as an influential player so that its intended countering of China’s rise remains without the complexity of any Russian involvement.

The Russian foreign minister may have been a tad late in his engagement of India because the subcontinent has witnessed the visit of the former US secretaries of state and defence for the 2+2 Dialogue in end of October 2020 and a visit by America’s new defence secretary Lloyd Austin in March 2021.

Russia has been observing the rising strength of India-US ties which in recent months have received a spurt as a result of China raising the ante in the Indo-Pacific. The Russians cannot afford to be insignificant in the manoeuvres which are taking place at this stage without any definitive terminal status in mind. The Russian concerns, however, are not pegged to just the immediate area of South Asia. They go far and wide commencing from East Europe where the former Soviet Union held sway through the Warsaw Pact in the Cold War era. The US and the Western Europe effectively neutralised Russian influence there by the inclusion of the former Soviet vassal states into Nato and the European Union.

Russia resisted the eastward march of Nato by contesting this in Ukraine, setting up one of the most effective hybrid campaigns in recent times. Russia’s influence in the Middle East, however, was enhanced through its support to Syria in the civil war, to Iraq in its post-war dispensation and to Iran in the quest to partially overcome the pariah status that the United States imposed on the latter. The alignments have been effective to achieve balance even as the Middle East stabilises and the isolation of Iran is under reversal. Russia also maintains balance in its relationship with Turkey, with which it has had several “run ins”; both sense their mutual interests and despite being on opposite sides in many theatres continue to maintain cooperation.

That brings us to Central Asia, the reputed soft belly to which Russia remains hugely sensitive. The Soviet invasion of Afghanistan in 1979 was launched when a threat was envisaged to the Central Asian republics (CARs), then a part of the Soviet Union. Later, Russia remained mindful of the threat potential to the CARs and has made every effort to retain its hold, including the presence of Russian troops in Tajikistan and now in Kyrgyzstan. It is improving its foreign military bases in the region and supporting the militaries of the CARs with activities ranging from arms sales and joint military exercises to training and assistance programmes, both in bilateral and Collective Security Treaty Organisation (CSTO) frameworks. Russia perceives the region as a source of political instability, organised crime, and a pathway for extremists into Russian territory from there, or Afghanistan. It has an 11 per cent Muslim population existing in regions such as Tatarstan, Bashkortostan, Dagestan and Chechnya, which have witnessed separatism and efforts at the cultivation of extremist practices. Russia’s interest in Afghanistan and Pakistan stems from this perceived future threat, especially in the aftermath of a US withdrawal. It therefore maintains a pro-Taliban stance and in the hugely complex Afghan international power game it is seeking to remain aligned with Iran, which has its differences with the Taliban but linkages too. In Afghanistan, every nation is in projection of power play and the alignments are not fixed; no one enemy and no one friend, multiplicity is the policy.

This is what has brought Russia to Pakistan, a nation with which it has traditionally not had friendly relations and that goes back also to the 1980s, when Pakistan became the US-Saudi “frontline” state to contest the Soviet push into Afghanistan.

Even before that the Soviet Union had aligned with India, and the 20-year Indo-Soviet Frienship Treaty acted as a balance to the Cold War alliances of Pakistan with the US. After the Cold War ended, India has attempted to maintain a balance between the US and Russia. While it needed US cooperation to enhance its economic development, security and technological threshold, India has also continued to rely on Russia for diplomatic support and defence supplies; its Russian-origin military equipment being in abundance. The policy of multilateralism was really at the fore with India’s decision to spend $5 billion to buy the S-400 air defence system, at the risk of application of the US legislation -- Countering America’s Adversaries Through Sanctions Act (CAATSA). Russia now realises that the core centre of international politics is shifting from the Middle East and Afghanistan to the Indo-Pacific. China’s coercion of its Asian adversaries, particularly India, and the wolf warrior diplomacy that China has adopted is changing the equations of alignment internationally. The “Quad” is being seen to be transforming from the confused and benign platform to something more substantial, with India moving closer to the US. Russia cannot afford to see the carpet being swept from under its feet and is making efforts towards retaining its alignment with India to enable a more proactive role in Asia. Simultaneously, it cannot consider Pakistan a basket case because the geostrategic location and its linkages with the Taliban promise higher security to Russia. The promise of weapons to Pakistan for counter-insurgency operations may not, however, immediately materialise.

Mr Lavrov’s visit to South Asia may have come slightly late but it helps reveal Russian interests and the additional complexities that the Indo-Pacific is likely to witness in the future.