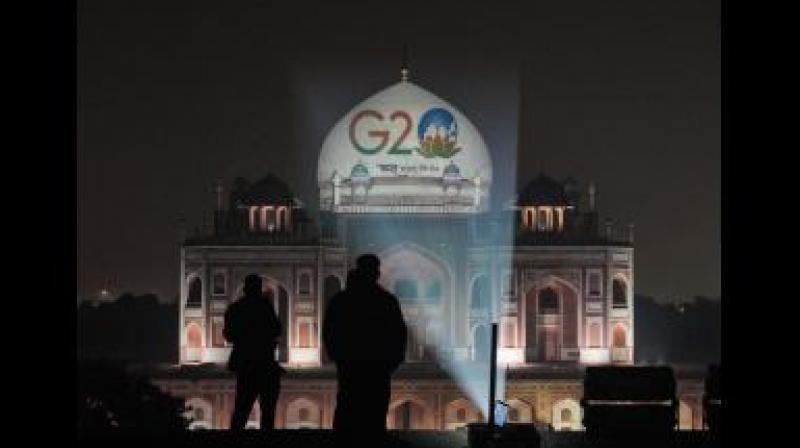 Humayun's Tomb is illuminated displaying the logo of G20 Summit 2023, to be held in India, in New Delhi. (Representational Image/PTI)

India could hardly have begun its presidency of the G-20 group with a more resounding manifestation of Narendra Modi’s overall theme, “One Earth, One Family, One Future”. This rendering of Vasudaiva Kutumbakam (The whole world is a family) from the nearly 3,000-year-old Mahabakya Upanishad is reflected in the record 12 per cent increase in global remittances to the motherland by expatriate Indians.

The anticipated $100 billion — 25 per cent more than next year’s expected foreign direct investment — will certainly come in handy as the BJP government reaches out to what it sees as India’s digital destiny. But the effusion of nationwide celebrations, 200 meetings, illuminated monuments and gatherings in tourist destinations like Darjeeling and the Andaman and Nicobar Islands suggest a jamboree for domestic voters rather than a serious response to international problems. Even hailing the start of the presidency as “a historic day” and “a moment of pride for all Indians as the eyes of the world are upon us” exaggerates the significance of what is a routine occurrence based on sectoral groupings and a rota system. Previous hosts — Indonesia, Italy, Saudi Arabia, Japan and Argentina — did not preside over earth-shattering changes.

Neither are Brazil and South Africa, next in line, likely to do so.

The G-20 is an informal forum for discussion between major members and non-members of the Organisation for Economic Cooperation and Development on issues concerning global economic stability. Founded in response to a series of economic crises, the group is expected to address issues such as international financial stability, climate change mitigation, and sustainable development, all of which is of concern to India. But the G-20’s consultative and advisory nature argues against the drama of the “inclusive, ambitious, decisive, and action-oriented” programme that India promises. Terrorism, for instance, must certainly be repugnant to most members. But no national agenda can be foisted on an association of 19 governments plus the 27-nation European Union, especially when given the aberrations of global politics, one man’s terrorist can be another man’s freedom-fighter.

Jubilation over the Indian diaspora’s remittances being far higher than similar earnings by Mexicans, Chinese, Filipinos and other manpower-exporting nations must also take into account that foreign remittances are never assured. We cannot forget the bitter lesson of 1991 when overseas Indians who had invested in India when the going was good scrambled out when things became rough. Of the $2 billion that Non-Resident Indians moved out of the country’s external rupee accounts during the Gulf War and the political turmoil of 1991-92, a billion dollars were withdrawn between April and June 1991 alone.

Expatriate funds might be even more volatile now because, according to the World Bank, key destinations have changed from low-skilled jobs in the Persian Gulf to sophisticated employment in the United Kingdom, United States and Singapore. That might mean more money but without the same inducement to send it to India. In fact, given employment prospects in this country — and this is something that should worry New Delhi far more — the new destinations are a powerful disincentive to repatriating any savings at all.

Workers in the Gulf have no option but to send their money back because the employer governments don’t allow them to acquire property or live there permanently. Such restrictions are less stringent in Britain, the United States and Singapore which are the chosen destinations of most middle-class Indian migrants. A caring government would have investigated the message of rising emigration figures and asked why more and more Indians vote with their feet and try to settle down abroad every year. Not for nothing did Britain’s home secretary, Suella Braverman, object that a free trade treaty with India would encourage a further influx of immigrants like, ironically, herself and her boss, Prime Minister Rishi Sunak.

The new trend doesn’t only mean that remittances from abroad may tend to shrink in the longer term since migrants like Mr Sunak and Ms Braverman who have prospered abroad have no reason to invest in the country which their ancestors abandoned. It also means that some of India’s best educated and technically qualified personnel will take their talents overseas. India could well have used the skills of the roughly five million ethnic Indians in the US who are in the highest income bracket. But sadly, for this country, what has hitherto been mainly a brawn drain is now in serious danger of becoming a major brain drain.

If truth were to be told, this is the fundamental distinction between the core group of the seven G-8 countries (US, Britain, France, Germany, Italy, Canada and Japan — Russia’s inclusion made the G-7 the G-8) which first met formally in 1975, and the rest that make up the G-20: between importers and exporters of manpower. Although the G-8’s expansion was dictated by the  awareness that key emerging economies such as China, India and Brazil were not adequately represented in the inner councils of global economic discussion and governance, the interests of the two sections are not always identical.

Mr Modi will preside over a year of strife and suffering. Not only does there seem to be no end to Russia’s assault on Ukraine but wars are ravaging Afghanistan and Yemen, famine threatens Somalia and Ethiopia, and the continuing influx of refugees into Europe is a reminder of unrest in Syria and Iraq. The United Nations will need $51.5 billion to help 230 million destitute people. Countries like the UK are cutting back on humanitarian aid while inflation and interest rates are rocketing, supply chains are disrupted, many economies are still suffering from the Covid-19 pandemic, and climate change threatens natural disasters like Pakistan’s devastating floods which cost an estimated $30 billion.

Mr Modi’s hope of building a consensus on debt sustainability and creating a disaster and climate-resilient infrastructure is commendable but 12 months is far too short for more than a beginning. India’s special interest in start-ups and bridging the digital divide also demands a much longer timeframe. On top of that, India’s policy differences with the United States on the Russia-Ukraine crisis (which prompted the Economist to dub India’s foreign policy “reliably unreliable”) and its own long-standing tensions with China into which Xi Jinping has breathed new animus further limit the scope for unanimous action. Mr Modi may find a less grandiose perception of the G-20 presidency ultimately more rewarding.