The dharna ended in the beginning of 2015, and a year later, the former dictator left the country. 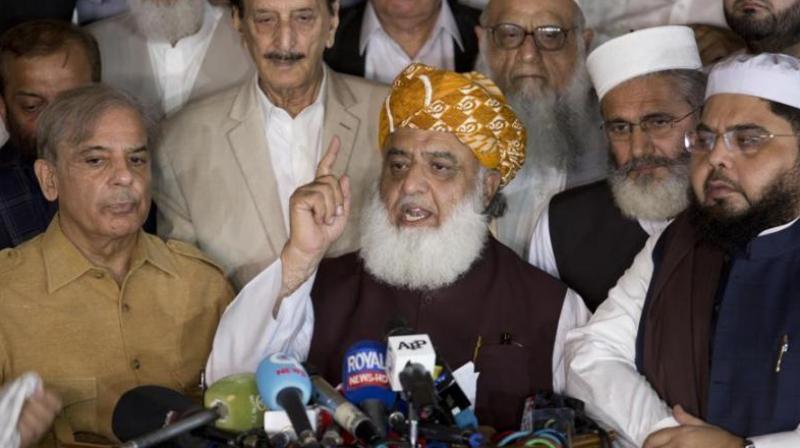 The dharna began and seems to be ending just as inexplicably if maulana’s garbled Sunday night speech is any indication. The ‘long march’ or dharna has now become a part of post-2008 politics. From the PPP government in 2009 to the PML-N in 2014 and now the PTI, each government has faced an onslaught of protesters roughly a year after coming into being.

Each dharna, sadly, is triggered by a false sense of overconfidence on the part of the newly elected; the PPP went back on its promise to restore the judiciary and aggravated the problem by sacking the PML-N government in Punjab; the PML-N ignored the PTI’s rona dhona (lamentations) over the four constituencies and the PTI’s short-sightedness has been its unwarranted aggression towards the opposition. If it wasn’t enough to imprison the major leadership, it added to the problem by name-calling, threatening to withdraw facilities in jail, refusing to issue production orders, etc.

Of course, it has to be said that a march is also triggered by what is happening behind the scenes — for instance, it is now widely believed that the 2014 march/dharna was used to pressure the then PML-N government and weaken its resolve to try Gen Musharraf. The dharna ended in the beginning of 2015, and a year later, the former dictator left the country. Similarly, the 2009 march also weakened the PPP government considerably and there are chances the fate of the present government will be no different.

But despite the behind-the-scenes machinations, one is tempted to ask if each government would have faced a less uncomfortable position if it had not been so dismissive of other political parties and opponents initially. But, one also needs to see the other side. Compared to 2009 and 2014, there is definitely less uncertainty and panic in the air. Fewer people are predicting the end of a government. Indeed, glancing back, it seems as if the uncertainty was at its height in 2009 when the march was about to begin. Back then, it wasn’t just Islamabad but also Lahore which was under siege and the government did its best to stop the charge on Islamabad. The fear of the government being sent home was palpable.

In 2014, there was a similar sense of uncertainty but it was less so than in 2009. In contrast to the PPP case, however, the PML-N government seemed to have learnt from 2009 and didn’t put up much resistance. Protesters from Lahore as well as Khyber Pakhtunkhwa reached Islamabad quite smoothly. There was fear of the government being sent packing but somehow it seemed less probable than in 2009.

This time around, the uncertainty is even less so. Partly, this is due to smoother civil-military ties — hence some are arguing that the uncertainty was higher in 2009 and 2014 because the civilian government wasn’t facing an invisible enemy. However, it is also because it is now easier to assume that governments will complete their terms. This could not be said with any certainty back in 2008. It is the proverbial silver lining.

But this is not to say that we, as a society, should now consider routine protesters demanding a government’s end. Apart from being wrong in principle, this should be a reason for worry, regardless of the crowds or the government. Accidents can happen and any government should be wary of loss of life or injuries to the innocent, which are possible if the state has to control or stop a crowd. It should never come to this. After Sunday night, it seems it will not.

Perhaps the maulana blinked on Sunday because he is a politician; and politicians, however much they may rant and threaten, will always find a way out. Politics is about compromise and not a war to an end.

Despite his thundering, no politician with stakes in the electoral system can blithely lead his supporters towards a confrontation which can cost lives. Every voter matters; every life matters. And similarly, a government (even if it is led by a seemingly uncompromising Imran Khan) will opt for negotiations and hopefully provide face-saving to the protesters. Indeed, we should never underestimate the innate common sense of our politicians, however much they may disappoint us. And there has been much to disappoint us in the recent past.

Postscript: In all the chaos of the past few days, the maulana may have impressed many with his political acumen but he has also revealed his bigoted views on religion and gender, which prove why he will never be a mainstream leader. Such views do not gel with the idea of democracy, however, much one harps on civilian supremacy.