In a fractured and increasingly polarised society, festivals offer a fantastic opportunity to be inclusive in its broadest sense 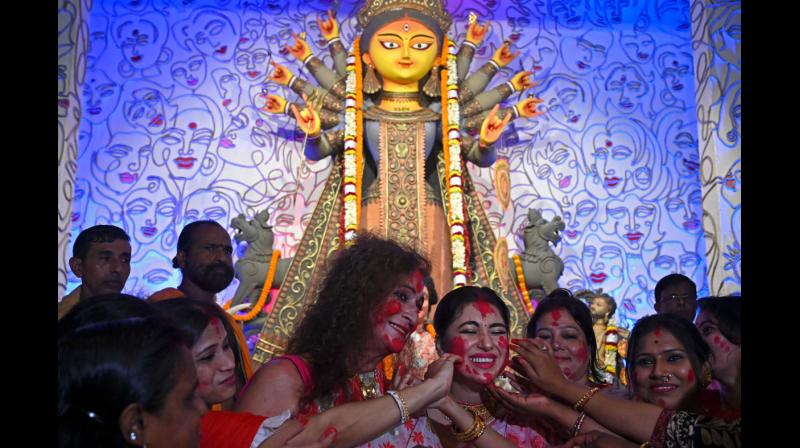 This year, Durga Puja, the biggest festival for Bengalis, was celebrated with more aplomb than ever since Unesco included “Durga Puja in Kolkata” in its Representative List of the Intangible Cultural Heritage of Humanity last year. (Photo: PTI)

Festivals matter no matter who you are, where you are and whether you are a believer or non-believer. They matter NOW more than ever when we are still wrestling with the geopolitical fallout of Russia’s invasion of Ukraine, the lingering Covid-19 pandemic and the gloomy economic forecasts, including a 98.1 per cent chance of a global recession.

For most of us, the culture of spectacle, the panoply of sounds, lights, the rhythm of the dhak in Durga Puja pandals, the colours, the conviviality, the gastronomic delights, the grand melas, Ramlila performances, Dussehra, and all the celebrations of the past few days and the celebrations to come meet a pressing psychological need to do something together as communities, as we slowly recover from the pandemic-induced forced isolation, reboot ourselves and move ahead.

This feels real. This feels good, after a long time.

“There is profound symbolic value in the opportunity to experience something together as communities. Festivals offer such a platform by condensing our exposure to cultural activities over a specific time and place: this means that festival participants must be present and engage in culture simultaneously with others, which, in turn, will result in meaningful (often, life defining) shared memories.”

What do festivals mean for a fractured society? Can it help us heal or can they move us further apart? There is no standard operating protocol on what to do in the season of fasts and feasts, nor a formula for how to be festive. Simply put, most of us associate festivities with a “feel good” sense.

The ongoing culture wars in India notwithstanding, many ordinary people get this fundamental point about this country. During Navratri, I asked a waiter in a tony café in South Delhi whether he was serving non-vegetarian cuisine. “Yes. All our customers are not Hindu. Not all Hindus are strictly religious”, replied the young man who wore a Hindu religious marker himself.

As someone who grew up in an agnostic household, I saw festivals as more about feasting than fasting and social rather than religious. It was also a time for reflection. One was brought up to never mock faith, or the faithful, no matter which religion they professed, and to internalise the idea that festivals are more than just fasts and feasts and rituals.

In a fractured and increasingly polarised society, festivals offer a fantastic opportunity to be inclusive in its broadest sense.

This year, Durga Puja, the biggest festival for Bengalis, was celebrated with more aplomb than ever since Unesco included “Durga Puja in Kolkata” in its Representative List of the Intangible Cultural Heritage of Humanity last year.

A lot of work had gone into attaining the tag which has catapulted Kolkata’s much-loved carnival to the world stage. One person whose effort needs to be acknowledged towards this is eminent art historian Tapati Guha Thakurta, who worked hard to compile a dossier which bolstered the argument that Durga Puja was originally “a Hindu religious event, but now the celebrations transcend all barriers of religion and creed, making it a grand celebration, an exultation of spirit”. Which brings me to what I believe is a critical issue — the significance of celebrating inclusion, not just diversity.

How do you translate that into practice in a country with numerous fault lines? The answer is simple — you can either look for what brings us together and generates collective joy or you can go around looking for what divides us and widens the chasm. Importantly, we need to recognise the difference between diversity and inclusiveness. Diversity denotes the existence of cultural and other differences. It is wonderful and necessary. Inclusion goes beyond. Inclusion means a respectful acceptance and celebration of differences. Inclusion is premised on being supportive towards those who have different beliefs and being respectful towards each other’s cultures.

Diversity spells drama. Only killjoys would try to take the sheen out of sequinned jootis, chaniya cholis or grudge anyone their share of garba, dhol, DJ and dandiya, even if they are not from the regions where these originated. We all need a soothing mix of fun, food, sparkle, spectacle and costumes in festive times.

But we need to go much beyond if we want to create a supportive ethos.

Can we share each other’s sorrows, pains along with festivals, as eminent human rights activist Bezwada Wilson, who has been leading a nationwide movement to abolish the dehumanising practices of manual toilet cleaning and scavenging in India, once put it so poignantly.

Festivals, whether religious or secular, national or local, can provide societal cohesiveness in these polarised times but we need to work towards it. It does not happen automatically. This means not hierarchising cultures and always saying “no” to exclusion and anything that divides people.

Sadly, the latter has been all too visible even in the context of festivals. One among many examples — some time ago, news reports from Kapu town in Udupi district of coastal Karnataka said management of one temple had decided not to allow “people from other faiths” to do business on its land during the annual temple festival.

Then, there is the growing and tiresome practice of trying to foist a cultural practice, including dietary preferences, on others who have other traditions during festival times.

But there are also reassuring markers of inclusiveness. Stereotypes of how a festival should be planned or celebrated are being steadily busted.

Today, we have women dhakis or drummers at Puja pandals. Traditionally, this was a male bastion. Murshidabad district in West Bengal engaged a Muslim woman artisan to decorate their theme-based pandal. Nasima Yasmin, a computer engineer, and her team used jute.

Dussehra in Bastar starts with the “Pat Jatra puja”. “This event is a ritual where the forest and woods are worshipped and given their due. It is celebrated on the day of the new moon. The Bastar Dussehra starts with this ritual because the life of most Bastariyas who live in Bastar is carved by the woods…,” as Chhattisgarh-based action-researcher Swarnima Kriti pointed out in an essay in Sahapedia, an open online resource on the arts, cultures and heritage of India.

As we celebrate, let us acknowledge the human need for collective joy and shared euphoria. Let us also recognise the bald truth — festivals can be sites of polarisation or societal cohesion. The choice we make will shape the future of this country.