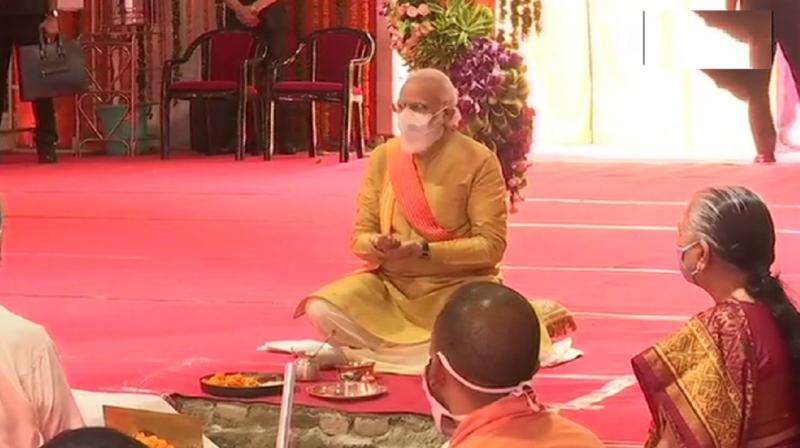 It will be futile to bewail the violation of secularism with Prime Minister Narendra Modi participating in the “bhoomi pujan” of the Ram Mandir a little after Wednesday noon.

Secularism has been squarely checkmated time and again from the 1989 Lok Sabha election onwards.

The question now is how this would benefit the future of the BJP and Mr Modi himself.

Will Wednesday’s ceremony ensure that the BJP and Mr Modi will return to power in 2024?

The BJP and Mr Modi would like to believe that it will, and they have taken all the pains to prove that the temple was now happening because the party had fought for it, turned a local property dispute in obscure Ayodhya into a political issue of national importance.

But he did not say any of this in his address to the limited gathering at the Ram Janmabhoomi site after the foundation stone-laying ceremony.

He waxed eloquent about the Ram of Valmiki and Tulsi, of Kabir and Nanak, of Mahatma Gandhi, though he deftly inserted the Hindutva narrative of undoing a historical injustice, which was a half-truth.

He tried to project Ram as the symbol of national culture, of inclusiveness and modernity. But it was simply rhetoric in the service of BJP politics.

He was careful enough to avoid mentioning the other part of the Ayodhya settlement as directed by the Supreme Court in its November 2019 ruling the allotment of land for Muslims to build a mosque in the place of the Babri Masjid that stood at the temple site. Obviously, the Prime Minister did not want to dilute the “Hindu civilisation and culture” line of his argument.

The dispute was settled in favour of the Hindu side by the Supreme Court and not by the Narendra Modi government.

The BJP leaders know that they cannot take credit for what the court had done, because if they were to do it that would mean that the Modi government had influenced or arm-twisted the highest court in the land.

But the non-government trust set up to build the temple as mandated by the court was handpicked by the BJP, as is evident in the choice of the former principal secretary to Prime Minister Modi as head of the panel of the temple construction committee, and to express their gratitude to the BJP and the Prime Minister, the members of the trust asked Mr Modi to be the chief guest at the stone-laying ceremony.

The BJP government in Uttar Pradesh under chief minister Yogi Adityanath had walked the extra mile to conduct the temple construction ceremony to make the bold declaration that this was a BJP event and that the temple trust was almost like a fig leaf to keep the separation between the BJP’s Modi government and the temple, between state and religion.

As Mr Modi and his colleagues project themselves to be admirers of the Constitution as the supreme philosophy of Dr B.R. Ambedkar, they are keen to maintain the fictional distance between the government and the Hindu faith.

Mr Modi might have participated in the temple ritual like a believer and he has every right to do so as a private citizen but he did not keep it as an affair in the private sphere of Hindus, whether they are in India or abroad.

The Prime Minister seemed to have got carried away by the emotion of the moment and said the temple marks a happy moment nationally and globally. Of course, he meant Hindus.

He spoke as Prime Minister and for the nation, and he seemed to genuinely believe that Ram as a national symbol was acceptable to the followers of all religions in the country.

But he would not want to say it because then he would lose the Hindu base of his party, and neither he nor the party can afford to do so.

Did the BJP ever dare fight an election on the Ayodhya issue? It did not because its leaders, including Atal Behari Vajpayee and Lal Krishna Advani, were not too sure that it would pay dividends. Despite the 1990 rath yatra of Mr Advani, the party did not gain much in the 1991 Lok Sabha election, nor did it forge far ahead in the 1996, 1998 and 1999 general elections.

After the defeats in 2004 and 2009, the party again fought two general elections in 2014 and 2019 under the redoubtable Hindutva icon, Mr Modi. But it still did not dare fight the election on the issue of the temple in Ayodhya.

It can be argued that the BJP leaders displayed sufficient political savvy in keeping silent on the temple issue, along with that of the abrogation of Article 370 in Jammu and Kashmir. They were not whether they would be able to romp home based on these two evocative questions.

Mr Amit Shah, when he was in charge of the BJP’s election campaign in Uttar Pradesh in 2014 and as president of the party in 2019, followed the rulebook as it were.

He said that the Ayodhya issue had to be settled either through mutual consent between the two communities —the Hindus and Muslims — or through the court’s decision. Neither he nor his party said that if they get a parliamentary majority, they would bring in the necessary legislation to enable the construction of the temple.

The sense of triumph of Hindu nationalism is unmistakable, and it is useful to remember that since the fall of the Soviet Union in 1991, religion has been the defining characteristic of national politics in many countries, in Russia and Turkey, and also partially in the United States of Donald Trump. India is following a global trend.

The question is to see how it will play itself out because the politics of religion is generally based on hatred. It is sure to come in the way of India’s economic progress and social well-being. Mr Modi wants modernism as well as divisive religious nationalism.

But history shows that religion is beautiful and sublime if it is not made a national political issue. However, the BJP has chosen, like many others elsewhere, to make it a national issue.