Google celebrates Junko Tabei's 80th birth anniversary, who advised never to give up

She was also the first and only woman to climb all the highest peaks on each continent including Mount Everest. 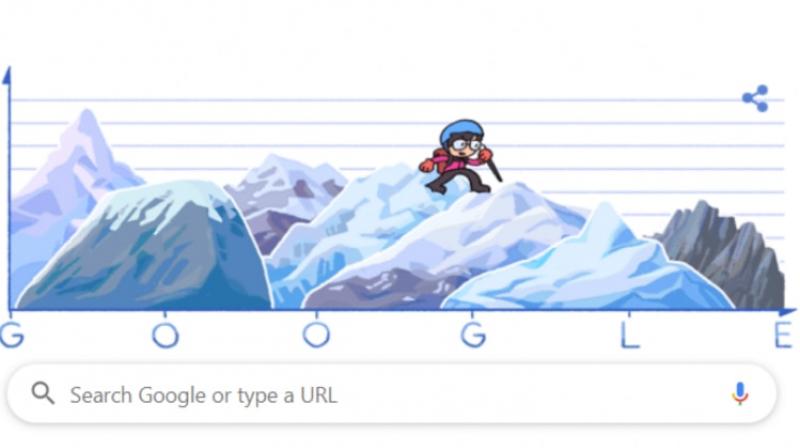 Google is celebrating the 80th birth anniversary of Japanese mountaineer Junko Tabei, the first woman to reach the summit of Mount Everest with an adorable doodle. (Photo: screenshot)

Mumbai: Google is celebrating the 80th birth anniversary of Japanese mountaineer Junko Tabei, the first woman to reach the summit of Mount Everest with an adorable doodle. She was also the first and only woman to climb all the highest peaks on each continent.

The doodle depicts the 4-foot-9 (144.8 centimeter) mountaineer scaling heights in her mountain climbing gear, at the top of the 7 peaks that she climbed during her life time. Tabei also became the only woman to have reached mountain tops in 76 different countries.

It is not just Mount Everest that she has climbed, she reached at the top of, Aconcagua, Denali, Kilimanjaro, Puncak Jaya, Elbrus and Vinson. She was also honoured by Japan’s Emperor, Crown Prince and Princess for her achievements.

Junko Tabei was born in the small town of Miharu, in Fukushima, Japan in the year 1939. The great woman discovered her love for climbing when she was only 10 years old, while on a school trip to Mount Nasu.

She climbed the Mount Everest in the year 1975 and was the first woman to do so. She, however, was not very happy with this distinction. She preferred to be known as the 36th person to have climbed the highest peak in the world. In an interview, she said, "I did not intend to be the first woman on Everest."

In 1969, Tabei also formed a club, Japan's first ladies club for the women who loved climbing mountains. This, she did to stand against the thinking that women were supposed to stay indoors and take care of the house and kids. At this point, she had two kids of her own.

Even when battling illness, she continued climbing. In 2012, the history-making mountain climber was diagnosed with peritoneal cancer and later died in a hospital in Kawagoe, Japan on October 20, 2016. Her advice to people was, “Do not give up....Keep on your quest.”