The discussions, however, will continue and a final decision will be announced on Saturday, leaders from all three parties said. 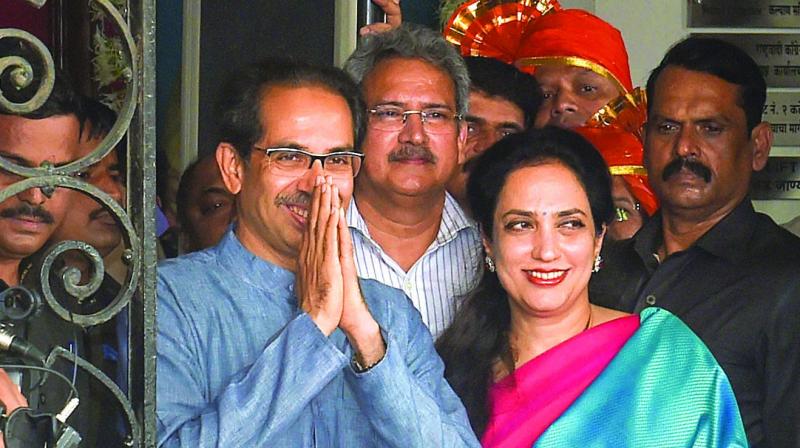 Mumbai: Nationalist Congress Party (NCP) chief Sharad Pawar on Friday brought some sense of closure to weeks of negotiations and confusion by confirming that Shiv Sena president Uddhav Thackeray would lead the Maharashtra government comprising his own party, the Congress and Sena. Leaders of all three parties held several rounds of meetings throughout the day to finalise all points related to government formation. The discussions, however, will continue and a final decision will be announced on Saturday, leaders from all three parties said.

“The leadership of Uddhav Thackeray has been unanimously accepted by the Congress and NCP. Discussions on other issues are in progress. A detailed announcement on the formation of the new government may be made on Saturday,” Mr Pawar said while emerging from a two-hour long meeting attended by leaders of the three parties in Worli.

According to sources, the three parties have agreed that Mr Thackeray will be the chief minister for the next five years. The decision was made in the presence of Mr Thackeray and was welcomed by all leaders who thumped their assent, a source said. The Congress-NCP-Shiv Sena alliance may stake claim to form government in Maharashtra on Saturday after issuing a joint statement.

However, Mr Thackeray himself was mum on the issue of chief ministership.

“The talks were satisfactory. We will end discussions soon and come before the media. We have come to a conclusion on many matters, but we don’t want to leave anything undecided. It’s the first time we’ve come together like this and we want to be united on everything,” Mr Thackeray said as he left the meeting.

Senior Congress leader Prithviraj Chavan said, “We have formed a consensus on most points. Only a few points remain to be concluded.”

Earlier in the day, Mr Thackeray also met party legislators and told them the process to form a Sena-led dispensation in the state was in the final stages. He instructed party’s MLAs to stay together in Mumbai as they may be required any time, a party MLA said.

President’s rule was imposed in Maharashtra on November 12 after the BJP, Shiv Sena and NCP failed to form the government. The BJP and Sena had fought the election as allies and managed to win a comfortable majority of 161 seats, bagging 105 and 56 seats respectively. However, Mr Thackeray refused to support the BJP-led government as he did not get an assurance on sharing the CM’s post for two-and-a-half years. The Congress and the NCP, which are pre-poll allies, won 44 and 54 seats respectively.

Together, Shiv Sena, Congress and NCP have 154 MLAs and with support of independent legislators, the alliance can muster the support of 170 MLAs in the 288-member House.