Tejas will run five days a week between CST, Mumbai and Karmali, Goa. 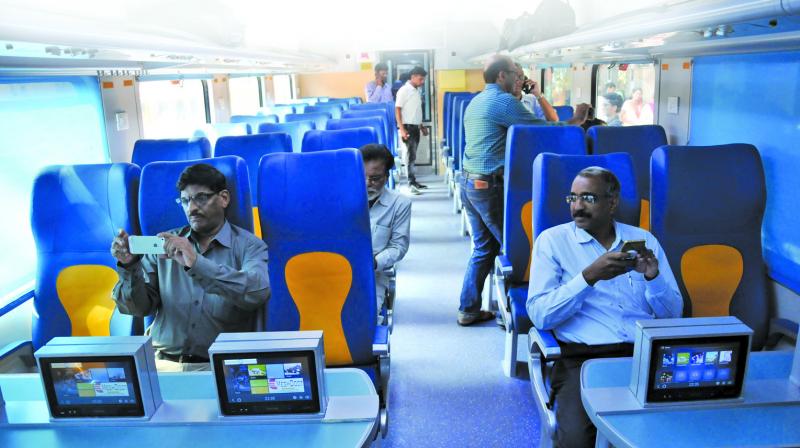 Passengers inside the amenities-rich Tejas during the journey to Goa on Monday. (Photo: Debasish Dey)

Mumbai: The speed of all long-distance trains will be increased in the next two to three years, Union minister Suresh Prabhu said in Dadar after flagging off the maiden run of Tejas Express, the country’s first high-speed, amenities-rich train at CST on Monday.

Tejas, which is equipped to run at 200 kmph, will be allowed to operate at a maximum speed of only 180 kmph due to technical constraints related to tracks and signals. Tejas will run five days a week between CST, Mumbai and Karmali, Goa. The Jan Shatabdi Express, which operates between Dadar in Mumbai and Madgaon in Goa, comes a close second at 160 kmph.

Mr Prabhu said that the aim was to reduce travel time from Mumbai to Goa, Mumbai to Delhi and Mumbai to Ahmedabad so that passengers found it a viable alternative to air travel. “We are getting a completely new stock of coaches for long-distance passengers, but this plan will not see results till two to three years later,” he said, adding that nearly 40,000 coaches in the country were undergoing retrofitting to allow them to fun faster. “Along with this retrofitting, we are looking at changing the infrastructure of tracks that will enable us run these trains faster. Again, these advantages will take time to reach fruition,” Mr Prabhu said.

Tejas’ sheen may be a tad dampened as Konkan Railway (KR) will be placing speed restrictions of 90 kmph on all trains, including Tejas. KR chief public relations officer, L.K. Verma said, “Yes, since 2001, we have implemented these speed restrictions as we have one of the steepest ghats as compared to any other region. This is a precaution but it will be lifted post monsoon.”

Mr Prabhu said trains — including the Humsafar AC chair car meant for the middle class, Uday double-decker for short and busy routes, and Antyodaya, a completely unreserved train meant for those from the lower economic strata — were a means to win back passengers who had shifted to air travel.

“We have seen a dip in the number of passengers travelling in our trains. Our effort has been to win them back by giving them comfort, clean trains, timely and economic options and we hope to introduce more trains like Tejas for you,” he stated.