Maha seat-sharing deal will be out in 2 days, says Sena chief. 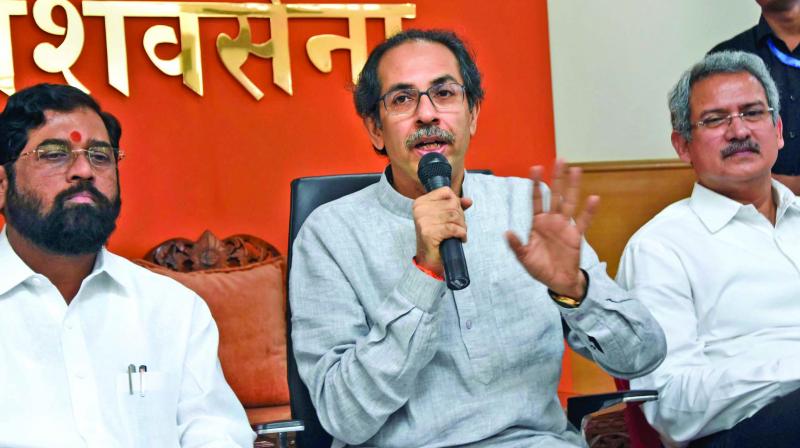 Mumbai: Amid speculation that the saffron combine will break up, Shiv Sena chief Uddhav Thackeray on Friday said its leaders would announce its seat-sharing formula in the next two days.

According to a source, the Bharatiya Janata Party (BJP) will contest 162 seats, leaving 126 for the Shiv Sena in the 288-member state Assembly. The BJP will also accommodate smaller allies within its share of seats.

It is pertinent to note that BJP president Amit Shah and Mr Thackeray had agreed before the Lok Sabha election to contest the Assembly polls on a 50-50 basis.

A few days ago, Sena spokesperson Sanjay Raut had said that the BJP would have to respect the 50-50 formula that was decided in the presence of Mr Shah and chief minister Devendra Fadnavis.

Mr Thackeray on Friday said, “Before the Lok Sabha election, BJP president Amit Shah, chief minister Devendra Fadnavis and I had held a detailed, systematic discussion over the alliance. The formula had been decided.”

He said that he had adopted a different system and requested to the chief minister to prepare the list of the seats in the Shiv Sena’s quota. We are expected to get the list within two days, he said.  “Once we receive the list, we will hold discussions with our leaders and declare the formula as soon as possible,” the Sena chief said.

He also claimed that there were no differences between both parties over seat sharing.

Mr Fadnavis and Mr Thackeray held a meeting on seat sharing late on Thursday. Sources said that both parties have decided to opt for the 162:126 formula as the number nine is lucky for both of them.

The Sena chief on Friday held a meeting on poll  preparedness with the senior party leaders and ministers at Sena Bhavan.