Earlier, the MeT office had sounded an 'orange alert', but it is now been changed to 'red alert' because of 'favourable synoptic conditions' 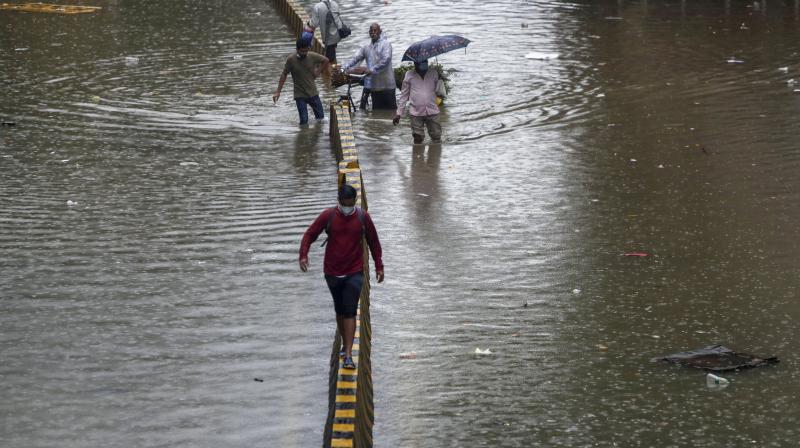 People make their way through a waterlogged street after heavy rainfall in Mumbai. (Photo: PTI)

Mumbai: The Regional Meteorological Centre of the IMD issued a 'red alert' for Mumbai, predicting heavy to very heavy rainfall in the country's financial capital on Wednesday.

Earlier, the MeT office had sounded an 'orange alert', but it is now been changed to 'red alert' for Wednesday because of the "favourable synoptic conditions", Dr Jayant Sarkar, head of the Regional Meteorological Centre here said.

Heavy rains had battered the metropolis on Sunday and Monday as well.

"There are two favourable synoptic situations for heavy to very heavy rains in Mumbai today and in the next few days. The offshore trough, spread from south Gujarat coast to Karnataka is expected to increase the intensity of showers," Sarkar said.

The second factor is the "shear zone" (referring to wind patterns) developed over Mumbai and the neighbouring region, he said.

Sarkar there will be widespread rainfall over Konkan and central Maharashtra as well.

The Marathwada region is also expected to receive widespread showers till Thursday and the rain intensity is likely to reduce subsequently, he said.

There is an off-shore trough running between Maharashtra and Karnataka, which generally carries moisture-laden westerly winds from the Arabian Sea to land, another official from the MeT office said.

In addition to it, there is an east-west "shear zone cutting across Maharashtra" and it has been adding to the prevailing favourable monsoon conditions, he said.

These two synoptic systems are leading to very heavy rain over Konkan, Goa and central Maharashtra, especially the Ghat areas, the official said.