One such child, Zaid Hussain, donning a Kejriwal attire, stood in a queue to enter the venue. 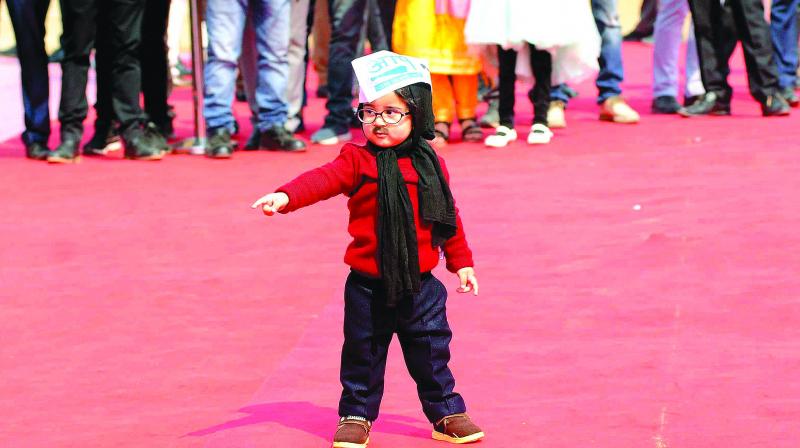 New Delhi: After Delhi resident Avyaan Tomar hogged the limelight by wearing an attire similar to that of the Aam Aadmi Party supremo during winters, several other similarly dressed children could be spotted on Sunday at Ramlila Maidan where Arvind Kejriwal took oath as the chief minister for the third time.

One such child, Zaid Hussain, donning a Kejriwal attire, stood in a queue to enter the venue. “We have come here from Bawana. Kejriwal has done good work in our constituency. Kejriwal zindabad,” said his mother Ruksana Begum. Zaid obliged dutifully when she directed her son to repeat the slogan in favour of Mr Kejriwal.

Avyaan, over-a-year-old, was pictured all dressed up in signature Kejriwal sweater, spectacles, AAP cap, sketched moustache and a muffler outside AAP headquarters on February 11, when the votes polled in the February 8 Delhi Assembly elections were counted. But he was not the only “Little Kejriwal” drawing attention and admiration of the crowd, as five more “Baby Mufflermen”, all belonging to the same family, added joy to the atmosphere.

Three brothers, Kashif, Sajid and Wajid from the Mirza family of Old Delhi brought their children, all five infants, aged two to six years, dressed in matching maroon sweater, black trouser and a muffler to boot.

The youngest among them, Abu Bakar, son of Sajid Mirza, 32, rode his father’s shoulders as he waved a big tricolour in his hands. “I am ‘Kejriwal’,” quipped Abu, when asked his name, and chanted, “Lage raho Kejriwal”.

Abu goes to KG (kindergarten), so he is “a KGwal”, Sajid said in a lighter vein. His brother, Basit, 6, the eldest among the children of the Mirza family, flashed a victory sign and showed his white “aam aadmi” cap. Wajid Mirza, Sajid’s twin brother, also brought his two sons — Hadi (5) and Umar (3), and 35-year-old Kashif Mirza, the eldest of the three brothers, brought his son Abdullah (3), the two generations were super excited to attend the event.