Metro-4, 9 to be built along with flyovers 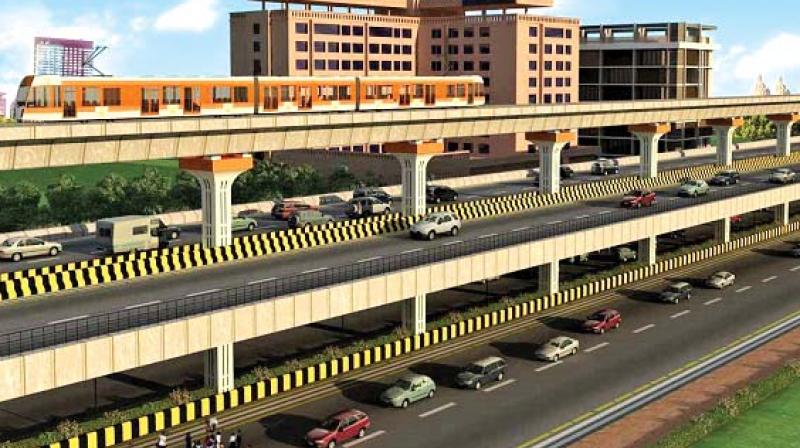 Three flyovers have been planned with the Metro line 4, two flyovers with Metro 9.

Mumbai: The Mumbai Metropolitan Region Development Authority’s (MMRDA) Metro-4 line (Wadala to Kasarvadavali) will be built along with three flyovers at three points on the alignment to ensure smooth flow of traffic. The flyover will run on the lower deck and the Metro on the upper deck. Metro-9 (Dahisar to Mira-Bhayandar) will also have two flyovers running parallel with it. Currently, such a model is seen in the Nagpur Metro corridor.

“We have proposed to construct flyovers, which were initially planned to ease the bottleneck but did not take off due to the metro alignment. In Metro-4, there are a total of three flyovers planned in areas, including Bhayander Pada, Kasarvadavli and Anandnagar near Ghodbunder,” said Pravin Darade, additional metropolitan commissioner, MMRDA.

He added, “The recently approved Metro line will have flyovers at Thane and Mira-Bhayander.” The metro will run on the upper deck while vehicular traffic will move on the lower deck. The plan is to ease traffic at chowks. The alignment runs through CSIA (Chhatrapati Shivaji International Airport) to Andheri and Dahisar to Mira Bhayandar.

The total estimated cost of the project as per DPR is `6,607 crore. The project is proposed to be funded by the state and Union governments and loans from multilateral funding agencies. The bidding process for this corridor has initiated the authorities.

A similar plan has been set up for the Metro line 6 (Swami Samarth Nagar-Jogeshwari-Vikhroli-Kanjurmarg), wherein the civic body had already constructed half the flyover.  The elevated road, which is an extension of the Jogeshwari flyover, is proposed to connect the Mahakali caves in Andheri east. The MMRDA has decided to construct the metro and flyover on common piers. Also, Metro line 2B (DN Nagar to Mandale) will also share common piers with the proposed Kalanagar flyover.