Arabul Islam, gives himself a clean chit in the killing of Hafizul Mollah, who was attacked at Natunhat. 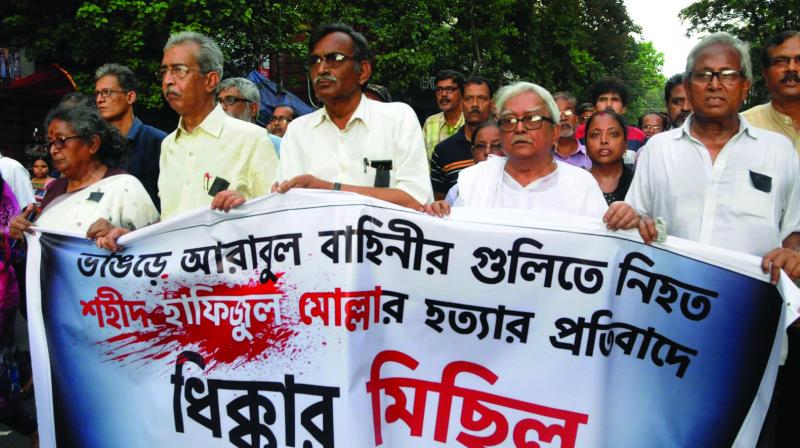 Left front chairman Biman Bose with CPI(M) state secretary Surtakanta Mishra and other left leaders took part in a protest rally from Moulali to Lenin statue on Saturday against the killing at Bhangar. (Photo: Abhijit Mukherjee)

Kolkata: A day after his arrest for the broad daylight murder of a man, Trinamul Congress strongman of Bhangor, Arabul Islam was remanded in the police custody by the district court in South 24 Parganas for 10 days as the police discovered a stockpile of crude bombs in his house amidst attacks by the angry villagers on a house of his follower and some shops in the area.

He, however, gave himself a clean chit in the killing of Hafizul Mollah, a member of the Committee for Protection of Land, Livelihood and Ecology during the attack by the armed Trinamul workers at Natunhat during a rally in support of a group of independent candidates from Machhibhanga on Friday afternoon.

The former MLA claimed that he was innocent while alleging that he became a victim of a conspiracy.

Booked on murder and several other charges of the Indian Penal Code, Arabul was produced at the Baruipur Court. The police prayed for a remand for 14 days. The judge granted the prayer but sent Arabul in police custody till May 22.

Later Arabul told the media from a police jeep, “I am not involved in the incident of firing. I do not have even any idea about it also.”

Arabul alleged, “I will urge Didimoni (chief minister Mamata Banerjee) to order an investigation and take action against the accused. I am not at all accused in the case. I was not present during the incident. It was an incident which took place among the villagers there. Neither us nor our boys were present there. I was in Kolkata at that time. They have done it in a planned way. I have been framed in a conspiracy.”

Surprisingly hours after the killing, the Trinamul supremo held Arabul responsible for the incident.

During an interview to a Bengali news channel in the evening she had said angrily, “Arabul was involved in an incident in Bhangor. Who has asked him to do it? No one has given him the right to do it. I have instructed the police to arrest him.”

According to sources, Arabul was present with his son Hakimul and his followers during the rally.

Khude, a close aide of Arabul, opened fire on Hafizul killing him on the spot, preliminary investigations revealed.

He is however absconding. After arresting Arabul the police searched his house at Gazipur only to stumble upon an underground bunker of around 3 ft at the backyard where several crude bombs were stockpiled.

Besides many bombs were found kept in packets and drums also.

Villagers thronged to his house to have a look at the bombs which were later seized by them.

The police suspect that the bombs were to be used to unleash violence during the panchayat elections on May 14. During the day angry members of the forum set the house of Arabul’s aide Alauddin who is also absconding.

Some shops were vandalised while a motorcycle was torched by them while road blockade continued at many places.