Earlier in the day, Jaitley’s body was brought to the BJP headquarters located on the Deen Dayal Upadhyaya Marg from his Kailash Colony residence. 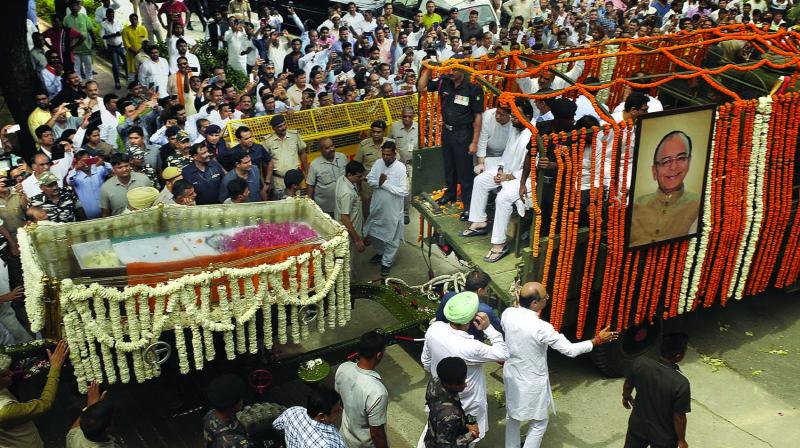 NEW DELHI: Delhi bid a tearful adieu to former Union minister Arun Jaitley who was cremated with full state honours at the Nigambodh Ghat on Sunday. The veteran BJP leader, who began his political journey as a student leader of the Delhi University, was on August 9 admitted at the All India Institute of Medical Sciences where he breathed his last at 12.07 pm on Saturday.

Earlier in the day, Jaitley’s body was brought to the BJP headquarters located on the Deen Dayal Upadhyaya Marg from his Kailash Colony residence. Wrapped in the national flag, his body was later carried in a flower-decked gun carriage to the cremation ground, amidst slogans of “Jaitley ji amar rahein” (long live Jaitley).

BJP workers and mourners queued up in large numbers outside the party headquarters since morning to pay their last respects to the leader. Outside the party office, people chanted “Jab tak suraj chand rahega Jaitley tera naam rahega” (Your name will endure as long as the Sun and the Moon exist).”

Posters remembering Jaitley had been put up on the roads leading to the Nigambodh Ghat, on the banks of the Yamuna river. One poster put up near ITO intersection read: “We will always miss you Jaitley ji”. Another put up near the party headquarters said: “You will always remain in our hearts. May God rest your soul in peace.”

Most union ministers, with whom Jaitley had served in the first term of PM Modi’s government, attended the funeral. Besides, Delhi chief minister Arvind Kejriwal, his deputy Manish Sisodia, Congress’s Jyotiraditya Scindia and Mr Jaitley’s one-time opponent in court-room, Kapil Sibal, were present.

It started drizzling when Jaitley’s family went on with the final rites of the veteran BJP leader. While Jaitley’s wife, who got drenched in the rain left the Nigambodh Ghat after the cremation, his son Rohan continued to wait by the funeral pyre.

Union health minister Dr Harsh Vardhan said he often discussed the state of the party’s affairs with Jaitley when he himself was heading the Delhi BJP. Being a close associate of Jaitley for over four decades, he was faced with a particular dilemma. Being the health minister he regularly visited Jaitley in the hospital, he said: “I met him three times while he was at AIIMS over the last two weeks and he was always smiling. Five years, he struggled with health issues but never once showed it on his face.”

Haryana BJP chief Subhash Barala fondly remembered Jaitley’s commitment to work and recalled: “Even on his daughter’s wedding day, while he kept meeting guests he was also clearing files side by side. How important work was for him, he set an example for us.”

The lawyers’ fraternity remembered the former Union minister as a “stalwart” and a “helpful and a great human being” whose demise was a huge loss for the profession. The Bar Associations across the national capital are planning to hold seminars to carry forward his legacy and to “make the younger generation learn from his life”. Delhi High Court Bar Association (DHCBA) president Mohit Mathur, who was also from the same school where Jaitley studied, said it was a “personal loss” while remembering him as “very helpful and a stalwart”. “He was a leader of the Bar and a stalwart. He was always helpful to lawyers and people in general. It’s very recently when we approached him for a lawyers’ welfare association and he helped us wholeheartedly.”

Mr Mathur said: “It was a personal loss for me. He was from the same school, where I went to study later. Whenever we organised anything on behalf of the school alumni association, he used to participate and help us out very enthusiastically.”

As he was an ardent fan of cricket, many in the sporting world remembered Jaitley as a person who was always willing to help others. Indian cricket captain Virat Kohli said: “He was genuinely a good person, always willing to help others. He took out his precious time back in 2006 when my father passed away to come to my home & pay his condolences.”

Former cricketer and Delhi BJP MP Gautam Ghambir said: “A father gives u a name but a father figure gives u an identity. A part of me is gone with my Father Figure Shri Arun Jaitley Ji. RIP Sir.”

Former Delhi cricketer Virender Sehwag  said that it was under his leadership at the DDCA, many players including him  got a chance to represent India. “He listened to needs of the players & was a problem solver.”