Dutch tulip forecast: brilliant, with a chance of tourists. 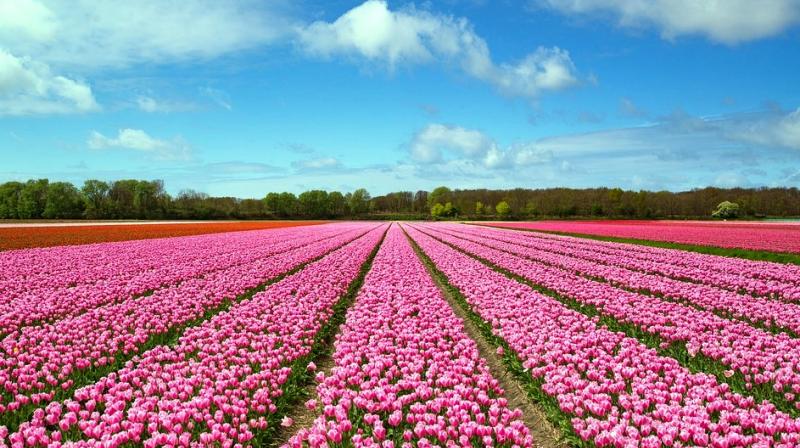 More than a million foreign sightseers are expected to visit this country of 17 million people on Easter weekend. (Photo: Pixabay)

Amsterdam: As spring flower fields around the Netherlands burst into bloom, painting the countryside with dazzling swathes of red, white, and blue, a modern day tulip bubble may be forming: tourists.

More than a million foreign sightseers are expected to visit this country of 17 million people on Easter weekend, a record, the Dutch Tourism Bureau said on Thursday.

Director Jos Vranken said he expects them to spend 300 million euros — a boon for the national economy. Many are attracted to the country’s museums and other cultural offerings, but in April, the flower fields and Keukenhof flower show in The Hague top many “must see” lists.

While flower lovers and the photographs they share on social media are free advertising for the country’s tourism, cut flower and bulb industries, it isn’t all a bed of roses. “That has a downside,” Vranken said. “Farmers are having increasing damage to their fields from tourists taking photos.”

Foreign and Dutch tourists alike have learned to use “Flower Radar” websites to identify where fields are in bloom, especially in the main bulb-growing center known as the “Bollenstreek” along the coast between Haarlem and Leiden.

Do not tiptoe through the tulips

Signs and barricades — now printed in Chinese and English — saying “Enjoy the Flowers, Respect Our Pride” have gone up at the edge of many fields. They illustrate the concept that taking photos at the edge of a field is okay, but actually walking among the flowers to take pictures ruins them.

Meanwhile, farmers in less-promoted areas of the country sense an opportunity. In Creil, northwest of Amsterdam, one enterprising group has set up a “Tulip Experience” complete with designated selfie area, hundreds of tulip varieties on display, helicopter tours, food and drinks, and bouncy castles for kids.