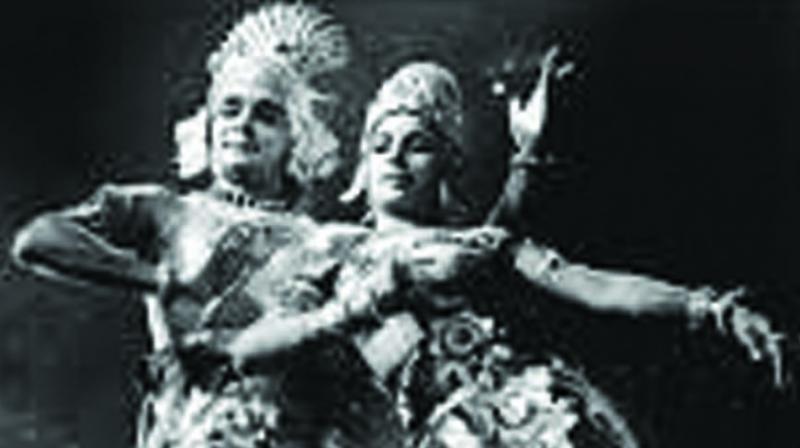 In the twenties in Europe Uday Shankar decided to learn more about cinematography and joined Pathe in Paris to learn how to make films.

Come December and the dance world pays tribute to the legendary dancer, choreographer, pioneer Uday Shankar who placed Indian dance on the world map. Ram Gopal and others followed in his footsteps.

Born on December 9, 1900 at the turn of the century in Udaipur, in an upper class brahmin family, his father, who was a minister from Jhalawad in Rajasthan, named him Uday Shankar. He was destined to be a dancer among his three younger brothers, Rajendra, Debendra and Ravi. He was fond of painting and later on his father who was in London, invited him to join Royal College of Arts when he was 20.

It so happened that his teacher Rothenstine knew Russian ballerina Anna Pavlova, who was looking for an Indian dancer for her choreography of an Indian theme-like Radha and Krishna and a Hindu wedding.

Rothenstein sent Uday Shankar for audition to Anna Pavlova. She liked his personality and engaged him in her ballet company. Uday Shankar knew some folk dancing. He went to the British Museum and studied Rajput paintings from which he drew inspiration for a duet between Radha and Krishna. He also devised the costumes and movements. The duet was presented at Covent Garden in London in September 1923 and became a great hit. Since then Uday Shankar never looked back. The rest is history. Ream has been written about Uday Shankar.

But the most precious record of his dance creations is found in an all time great film, Kalpana, which he directed. The story behind it is not so well known, though thanks to an American film director, the print of the film has been restored and has been saved.

When during World War II, the dance centre of Uday Shankar in Almora faced financial problems and the company found it difficult to survive, Uday Shankar decided to close the centre. He was however, keen to make a film and hoped that if the film becomes a great success, he would earn money and pay artists.

In the twenties in Europe Uday Shankar decided to learn more about cinematography and joined Pathe in Paris to learn how to make films. His interest was in photography and also recorded on 8 mm film several dances of Java, Bali and other countries during his travels. Alas, like his paintings they are not preserved and lost.

He also wanted through film to publicise his centre in Almora. The story was written at Almora. It is interesting to note that the renowned film director and actor Guru Dutt, who was in Uday Shankar’s company playing the role of Ram in the shadow play Ramlila, write the scenario. The question for finance was resolved as from Ahmedabad the well known Chinubhai Baronet offered him Rs 11 lakhs. As ill luck would have it World War II broke out. He filming was postponed and when in 1947 it was resumed, the cost scaled high to Rs 22 lakhs.

The amazing story of how film finally was shot in Chennai at Gemini Studios is equally fascinating. In these years in South India, the name of S.S. Vasan was a magic word. He assisted Uday Shankar, giving him all facilities at his Gemini Studios. Today we cannot believe when we learn that the entire shooting of 80 sequences was completed in 90 days with alternate weeks of day and night shifts. When the legendary Shambhu Mitra many years after interviewed Uday Shankar when he was past 75, for DD Bharati, we learn that Uday Shankar was so anxious to complete the film that he ran high temperatures. A doctor was kept in the studio to look after him when the shooting was on. The sets would have cost a large amount, but Uday Shankar devised with his genius the ability to paint, using wooden blocks to save the expenses.

And one more surprise was that the dancers were all new and did not know any thing about filming or acting. As a matter of fact, 30 boys were brought from Kerala who knew Kathakali. Some 20 girls knew dance. And can you believe, some of them included Padmini, her sister Lalitha and one actor from Mumbai Usha Kiran. Padmini Lalitha and Ragini were well known dancers known as the Travancore sisters. Padmini had acted with Raj Kapoor in the film Jagte Raho also after many years.

The language of the film is Hindi. Uday Shankar played the lead role as Uma and his wife Amala Shankar was the main heroine. The story of course was a disguised autobiography of Uday Shankar. But it is also a tribute to India and its great civilisation. Uday Shankar also has criticised rich people exploiting the poor, and in the film, one of the most amazing and much appreciated scenes is of labour and machines, where the mill owner exploits labour, bribes police, Uday rebels, but the mill owner manages to win. The way the machines run, the human beings also work like machines, using simple movements of Kathakali, and the way it is captured on film is unbelievably fascinating.

Uday Shankar’s intention is perfectly human, coupled with artistic acumen and a progressive outlook. His message is unambiguous, Uday Shankar declares that there are moments which, if a viewer will miss, the intent would be lost. He requests the viewers to watch all sequences carefully.

The film was screened in America and was reviewed by Uday Shankar’s inveterate dance critic John Martin, who wrote a marvellous review, praising Uday Shankar as a genius presenting dance in a captivating manner, and with a message that he wants India to be saved from the Occident and its bad influences.

However, when the film was screened in India, instead of it becoming a box office hit, it bombed and did not receive an enthusiastic response. I remember having seen it in Mumbai in1948, as a school going boy, but was fascinated by the series of dances. I remember the scenes where young girls who graduate and who do not want to serve the foreigners, throwing away their degree certificates. In another sequence when the young girls are made to marry old men, they protest and make fun of them. Uday Shankar has caricatured the system of child marriages.

Also, he has ridiculed the former rulers of various states, before they were merged into India as one nation; their lust, looking at young women parading their bodies on a ramp, and feeling excited. Uday Shankar has devised a machine which shows the mercury rising when these rulers got excited seeing young women, and the machine bursts.

But the most memorable scenes of Lord Shiva and Parvati dancing in the Himalayas, the fight with Gajasura and vanquishing him, the dance of apsaras, the montage of dance when Uday in a dream falls and the rishis show him the dance of apsaras, the tablatarang, birds flying, Uma with other women dancing, and they turning Uday’s arm et al are visualised and captured in the film which one can relish again and again.

In South India where the film was made, the reception was lukewarm. The conservative audiences did not like the film and the dances, as they were used to classical dances like Bharatanatyam. But now after so many years, the film has received encomiums universally. As a matter of fact, three years ago when the film in its restored condition was screened at Cannes Film Festival, Amala Shankar was invited to walk on the red carpet during its inauguration.

But one is also reminded that even when in India it did not receive a response, in Brussels in 1949 in a film festival, it had received the highest award and was acquired by 32 countries for their film archives. But it was a commercial failure and the common man did not appreciate its progressive approach. The film was far ahead of its time. As a matter of fact the ills which India suffers from as depicted in the film, corruption, vulgarity staring in our eyes, labour classes and farmers up in arms, parochial and communal obsessions threatening the dismemberment of the country, the fizzling out of revolution as envisaged by Gandhiji, we are all facing. Uday Shankar tried to draw attention to these through an art film.

In 2006, I was invited by the Lincoln Centre Film Society to bring the film from the National Archive of Film in Pune to screen in New York for four evenings. Crowds gathered, those who had seen Uday Shankar performing live, who were then in their eighties spoke animatedly about the magic they had as experiences and felt nostalgic while watching the film. Well known theatre director Richard Schechner from New York University, Prof Joan Erdman, writing a biography of Uday Shankar from Columbia University, Chicago specially came, the local Indian diaspora turned up in large numbers. Our Indian consul general Mr Rath loved the film.

In 2000 and 2001, for the centenary celebrations of Uday Shankar, I was invited by Indira Gandhi National Centre for the Arts to curate the exhibition on their premises. It ran for more than six months. Pandit Ravi Shankar visited many times and gave me and Sonal Mansingh television interviews for archives of IGNCA. Amala Shankar specially came from Kolkata; Zohra Sehgal reminisced her long association with Uday Shankar and regaled us with many stories. The enlargements of the photos are kept in IGNCA.

Fortunately, the film is restored and in the National Film Archive in Pune, its copies are preserved. I understand that it is also available on YouTube. It is a precious record of a great dancer and should be screened in every school in India and also be made available by the family members of Uday Shankar. Amla Shankar, Uday Shankar’s wife has turned 100 and Uday Shankar and Amala Shankar’s daughter Mamata Shankar, her husband Chandrodaya Ghosh, Uday Shankar’s son the late Anand Shanka’s wife Tanushree Shankar all celebrate in Kolkata the Uday Shankar Dance Festival in December in his memory.

Uday Shankar will always remain in the nation’s memory and when Indian dancers will perform in month of December anywhere in India, they will pay their tributes to this great artist.